Members of the Judiciary Committee listen to testimony about cash bail at a hearing on September 13, 2019. (Becca Costello, NET News) 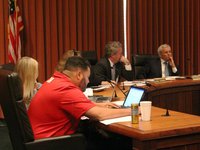 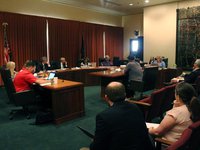 State lawmakers are considering changes to the cash bail system in Nebraska. The judiciary committee heard testimony on the topic Friday morning.

Nearly all testimony advocated for some type of reform to the monetary bail system.

The assessment looks at whether a person is likely to commit more crimes or skip their court date, and aims to take factors like race out of the equation. That’s the approach most states have taken across the country.

Lavon Stennis-Williams teaches classes at the Nebraska State Prison and Douglas County Jail. She says most of her students are nonviolent offenders who can’t afford bail.

"Many will be forced to take plea agreements because they just simply want to get out of jail," Stennis-Williams said.

Nigro supports ending cash bail altogether, which is what Sen. Ernie Chambers’ bill would do.

"You have a right to an attorney if someone cannot afford one and the state is seeking jail time," said Spike Eikholt of the American Civil Liberties Union of Nebraska.

But if the state isn't seeking jail time for the charged offense and the person pleads not guilty, a judge will often set a monetary bail.

Some urged caution in significantly changing the cash bail system.

"I'm not opposed to adjusting the method that determines how detainees are released pretrial," said Brad Johnson, director of Lancaster County department of corrections. "However, I do believe we need to be cautious as to how that change occurs."

"I find myself believing the community is safer with most of them remaining in custody," Johnson said.

Meghan Malik, Trafficking Project Manager at the Women's Fund of Omaha, said risk assessments should be particularly thorough for people charged with trafficking or domestic violence.

"The pretrial time period is a particular threat for further violence," Malik said. "Currently many victims utilize this critial time while their offender is held in pretrial detention to create and implement safety plans and ensure future protection from violence."

This interim study committee hearing will guide lawmakers in crafting bills when the legislature is back in session in January.