A choral concert earlier this year at the University of Nebraska at Omaha wasn't your typical musical performance. UNO’s concert choir and an A cappella choir from Omaha Central High School, along with a string ensemble, performed Joel Thompson’s Seven Last Words of the Unarmed. It was a sobering, seven-movement choral composition that confronts the violent deaths of young black men and the last words they said before they were killed.

It’s rehearsal day at Strauss Recital Hall at the University of Nebraska at Omaha. Dr. Derrick Fox is the director of choral activities at UNO is working through some of the nuances of the seventh movement of Seven Last Words of the Unarmed with the school’s concert choir.

The students are singing the last words of Eric Garner, an unarmed black man who died after police in New York City put him in a chokehold during a confrontation in 2014. His last words were “I can’t breathe.” 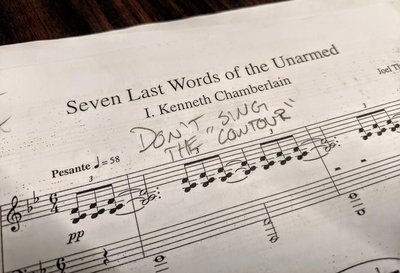 Sheet of music from Seven Last Words of the Unarmed. (Photo by Jack Williams, NET News)

Fox and his students have been working on this piece for a few years. It’s a tough thing to get through, both for Fox and the performers. The movements are gripping and raw.

“There was one day where I got emotional because the piece speaks to me in many ways that it doesn’t to some of them, and they need to see that,” Fox said. “I’m on this journey with them as I’m leading it because I’ve been on it a little longer than some of them, but I’m still part of the journey. Me being vulnerable allows them to vulnerable.”

Madison Koperski is a junior music education major at UNO and is one of the performers. She reads over the second movement, which include the last words of Kenneth Chamberlain, a black man who was shot and killed by police in White Plains, New York after he accidentally triggered his medical alert necklace inside his home.

“The first words that you hear are ‘Officers, why do you have your guns out?” Koperski says. “And then that is repeated throughout that movement.

She gets emotional as she talks about Chamberlain’s last moments. 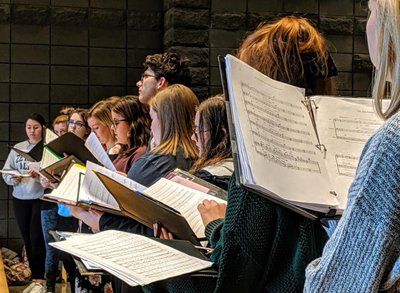 “The fact that we sing their last words, it’s such a deep human feeling that just comes from a deep part of the soul,” she says.

The first words of the fifth movement are “You shot me”. They’re also the last words of Oscar Grant, an unarmed black man shot in the back by transit police in Oakland, California in 2009. Performers hit their chests and shout in a chaotic crescendo.

It’s a difficult part of the composition to perform. Some students get emotional afterward and have to take a few moments to compose themselves. It’s an uncomfortable reality for some who haven’t been exposed to violence and injustice.

“Some people have to realize that they don’t know how to feel because they never have had to feel anything about this,” Fox said. “It’s just a news blurb and then you go on with your life. Then there are some people who experience it every day because they have family members or friends, but you’re in a space now where you haven’t been allowed to maybe have or express those feelings, so what are you supposed to?”

“It’s not real.” Those were the last words of John Crawford before he was shot by police while holding a BB gun he’d picked up in the sporting goods section of a store in Beavercreek, Ohio in 2014. It’s the sixth movement of Seven Last Words of the Unarmed.

“Sometimes you go to concerts and events like this and you have your feelings but you don’t know what to do with them afterward,” Fox said. “What we’ve done in the program, I’ve listed several organizations in Omaha and in Nebraska, that if you feel like you need to channel that energy, all you have to do is turn the page and pick one.”

Editor's Note: This story is part of our "Best of 2020" Signature Story project. The story originally aired and was published on March 10, 2020.