Under pressure from colleagues and constituents who disapproved of his behavior and attitudes toward women, Sen. Bill Kintner announced Wednesday he is resigning from the Nebraska Legislature. And a special committee was appointed to look into a challenge to the election of Sen. Ernie Chambers.

Kintner’s announcement followed two days in which he came under fire for retweeting a picture and comment from last Saturday’s Women’s March that many interpreted as joking about sexual assault. That revived calls for his resignation that first cropped up last year, when he was fined $1,000 for having cybersex on his state computer.

In a news conference, Kintner suggested his outspoken conservative politics had contributed to forcing him out. “You know I’m a fighter. When I first arrived at the Legislature, I fought the rapid expansion of the budget, big government programs and infringement of our liberties. It was lonely at times. I lost a lot of battles. I won a few. I always kept fighting for the taxpayers. I never stopped fighting. That’s one of the reasons I stand before you today,” he said. 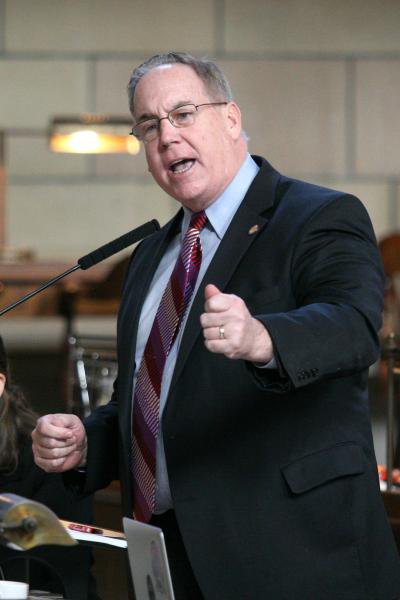 Kintner’s announcement came less than an hour before the Legislature was to take up a resolution to expel him. Speaker Jim Scheer had predicted there would be the necessary 2/3 vote to do so.

Kintner said he’d received a lot of support from constituents, and there was another reason he was reluctant to quit. “I hesitate to resign, as I know that my resignation will be hailed as a victory to the progressive liberal movement. But this is not about justice or doing what’s right. This is the old adage that might makes right. If you have the votes, you can do what you want,” he said.

Scheer, like Kintner a conservative Republican in the officially nonpartisan Unicameral, didn’t see it that way. “No. I guess I just look at an individual that had several missteps from the perspective that I think most of the body was looking at was not isolated incidents but maybe a pattern of behavior that was causing the problem,” Scheer said.

Nebraska Democratic Party Chair Jane Kleeb said the Women’s March had taken down its first politician, adding Republican Gov. Pete Ricketts should have acted over a year ago.

Ricketts kept silent while the cybersex scandal was being investigated, but said Kintner should resign when the scandal broke last August. Wednesday, the governor said Kintner did the right thing by resigning.

And speaking to a roomful of reporters, he cited another politician who resigned, but only after a remarkable comeback from his defeat for governor of California in 1962. “To paraphrase Richard Nixon, you won’t have Bill Kintner to kick around any more,” Kintner said.

Sen. Ernie Chambers, who led the charge for Kintner to resign or be expelled, rejected Kintner’s claim that being forced out was a sign that “might makes right.”

“This has nothing to do with might in the sense of pure numbers. It has to do with a man who violated the law, the constitution and regulations when he misused, in a criminal fashion, the state-supplied laptop. He admitted all that in his settlement of the matter,” Chambers said.

Chambers was also unimpressed with Kintner’s invocation of the Bible. “Even the Devil cites scripture, as he made clear when he told Jesus ‘Jump off the mountain and have your angels come and get you,’” Chambers said. “The fact that a devil then cited scripture makes it not surprising that one of his progeny in the Legislature would do the same thing.”

For his part, Scheer said he was glad Kintner resigned rather than forcing the Legislature to debate expulsion. “I was relieved and pleased that he determined that the best route for both himself and his family and the state and the body was to go ahead and effectively resign. It took the process that could be very contentious over probably the next several days of discussion away, and lets us get on with the business of the state,” Scheer said.

Wednesday afternoon, the Executive Board took up a challenge to Chambers’ election filed by John Sciara, whom he defeated last November. Sciara claims Chambers doesn’t live in this North Omaha district, but rather, in Bellevue, where Sciara campaigned for that district’s former senator.

“I knocked on doors for Sen. Tommy Garrett. And the first three people I spoke to said that he lives there. And a former state senator who lived on the same street told me that when he was living on the street, he noticed Sen. Chambers being there. That was as far back as the year 2000,” Sciara said.

Chambers denied the charge. “No. I don’t care what they say. There are people who say I’m this or that or the other. I will not account to any white person or black person where I go as a man. And by somebody bringing up gossip innuendo or speculation, they’re not going to get me to tell where I spend my time. He’s got to prove that it’s my intent to abandon my home where I’ve lived for decades,” Chambers said.

Sen. Dan Watermeier, head of the special committee which will investigate, said he hopes to resolve the matter quickly. “I don’t want to let this drag on for a month. It’s my choice to stay right on top of it and answer the questions that are coming out,” Watermeier said.