Keystone XL Pipeline Back in Court. Here Are the Questions You Should Be Asking

Another round of arguments before the Nebraska Supreme Court brings the opposing sides in the Keystone XL pipeline project together again. 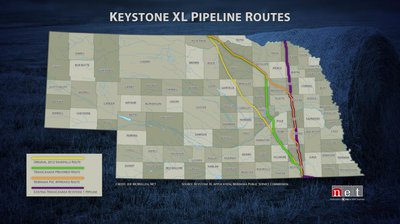 Map of past and current Keystone XL pipeline routes through Nebraska. (NET graphic by Joe McMullen)

The state’s approval last year of a pipeline route set off the latest flurry of legal briefs leading to Thursday’s oral arguments before the justices.

Below are the questions you may be asking about the progress and delays in pipeline project advanced by TransCanada designed to carry crude oil products, which some refer to as tar sands oil, from its facilities in Canada across three states to a pumping station in Steel City, Nebraska.

(Watch the Supreme Court arguments live at 9:00 am CT by clicking here.)

Why is this case back in court?

No one seriously expected the siting decision made last year by the Nebraska Public Service Commission (PSC) to go unchallenged in the courts, regardless of the outcome.

Late in 2017, the PSC ruled TransCanada failed to show its “preferred route” was in the public interest. A majority of the commissioners approved a route that more closely paralleled the company’s existing utility byway.

The PSC’s selection would route the pipeline around the Nebraska Sandhills and, in theory, minimize the risk to the underground waters of the Ogallala Aquifer. The new underground path would converge about halfway through the state with the existing north/south Keystone One pipeline completed in 2010.

The lawsuits quickly followed. Owners of land along the proposed path of the pipeline filed challenges to the route itself and the state’s approval process. Joining in the fight are two Indian tribes and the Sierra Club.

TransCanada’s attorneys requested the case be put on a fast track and asked for expedited arguments before the Supreme Court. The justices agreed. Briefs have been filed in the last few weeks. Oral arguments are Thursday.

The company faces a 2019 deadline to negotiate agreements with landowners. In court filings, the company claimed a “segment” of property owners were unwilling to proceed with negotiations until the Supreme Court issues a ruling on whether the process and the route are legal.

What are the issues to be decided?

The landowners are seeking to throw out the PSC’s approval, in a close 3-2 vote, of the so-called “mainline alternative” route. Their attorneys make the case, in briefs filed in advance of the hearing, TransCanada didn’t formally seek approval for that route, and presented a majority of its evidence for a different “preferred” route.

Opponents argue because no substantive evidence was presented in its original application or during days of public hearings the process must start anew with fresh evidence defending the “mainline alternative.”

There are also claims by the landowners that the process used by the state was flawed from the start and TransCanada did not advance its application to the PSC in an appropriate manner.

Why have two tribal nations been involved in the suit?

Two tribes will be appearing before the Supreme Court. The pipeline crosses land owned by native peoples or areas considered culturally and historically significant.

The Ponca Tribe of Nebraska and the Yankton Sioux Tribe argued in separate briefs that the PSC violated its administrative rules in limiting the range of the testimony they could present to “social and cultural issues.”

Of particular concern to the Poncas is the state’s limits on considering the impact of historical sites of importance to the tribe but not covered by the National Historic Preservation Act. That’s the standard set by federal officials. Nebraska’s rules, they claim, require the PSC to specifically consider historical and cultural resources in the public interest of Nebraska, including the historic Ponca “Trail of Tears.”

The trail is the path the tribe members took on a deadly forced march in 1877 when the federal government removed Natives from their land in northeast Nebraska and sent them to live in Indian Territory in Oklahoma.

When will the Nebraska Supreme Court make a decision?

Each side has been allotted 30 minutes for oral arguments before the Court on Thursday. That’s an unusually long amount of time for the lawyers to make their case, but, in the case of those challenging the PSC ruling, the time must be divided between four parties.

The justices will be questioning the attorneys about the material already presented to the court. It’s likely some follow-up briefs will be filed as well.

The Nebraska Supreme Court does not schedule release dates for opinions at the time of a hearing. It is anticipated, because of the request for an expedited ruling, the justices will release an opinion before the end of the year.

Do other legal challenges remain?

Significant legal challenges lie ahead for the project.

In Nebraska the issue of whether TransCanada, a private and foreign-owned corporation, may legally force the sale of land if owners are unwilling.

Nebraska landowners along the route sued previously in 2015 to block the company’s use of eminent domain but TransCanada withdrew its filings to force the sale leaving court rulings on the legality unresolved.

Lawsuits claiming Keystone XL violates federal environmental law remain in play before federal judges in Montana, where the pipeline would crossover from Canada.

When will construction start on the Keystone XL pipeline?

It could happen as soon as summer 2019, but the legal challenges will have more to say about that schedule than the engineers at TransCanada.

It’s important to note the company has yet to officially announce a final investment decision on whether to advance and pay for the project. The market for oil will have more to say about that aspect than anyone else.

The company is delivering pipe, clearing vegetation and advancing the earliest stages of the civil engineering work on pumping stations. South Dakota has begun planning for the impact of large-scale work camps along the construction path.

TransCanada would not comment for NET News ahead of the court hearing, but a spokesperson told Montana television station KTQV the company is “excited to be moving this project forward” adding construction on the pipeline is expected to begin sometime in the spring or summer of 2019.