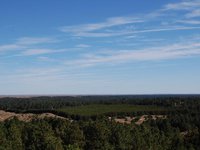 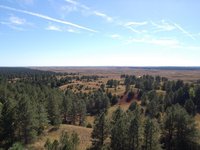 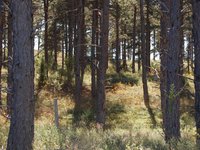 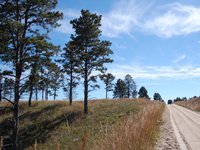 More than a century ago, ambitious Nebraskans convinced President Theodore Roosevelt to designate two tracts of land in the state as national forest. He agreed, even though most of the land in question consisted of sand and grass, not trees.

From the top of 50-foot-tall Scott Tower, Julie Bain shades her face with her hand. She looks out across the wide expanse of the Nebraska National Forest she supervises, the Bessey Ranger District near Halsey, in the middle of the Sandhills in north-central Nebraska.

“I mean when you look across it like this, it is kind of astounding that people planted all of it,” Bain said.

To the south, a wide carpet of green trees stretches almost as far as the eye can see. But on the western side, the trees stop abruptly, a sharp contrast to the surrounding grasslands.

“It’s far from a natural forest,” Bain said, “even the boundary is still a straight line.”

During the first half of the twentieth century, crews planted nearly 30,000 acres of the Sandhills in a massive prairie forestation experiment. It was intended to provide timber for the railroad and early Sandhills residents. Spurred by the Homestead and Kincaid Acts, hundreds of thousands of people moved west to settle on former Native American land.

“And when they got to the plains, these are primarily easterners and Europeans, they found the plains has a lot of wind, blizzards and open prairie,” Bain said. “They didn't have building materials and they had limited fuel to use for warmth and cooking.”

These settlers coming from the forested eastern U.S. were kind of obsessed with trees, Bain said. 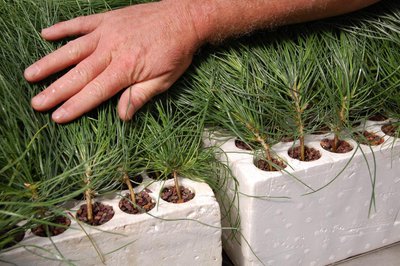 Richard Gilbert, manager of the Charles E. Bessey Nursery, shows off a bunch of pine seedlings in the greenhouse. While the nursery no longer provides seedlings to plant in the Bessey Ranger District, it remains a busy nursery today. In addition to providing seedlings for the Nebraska Conservation Trees Program, it serves as the seed bank for the Rocky Mountain Region. The nursery provides between 700,000 and one million seedlings for the U.S. Forest Service in neighboring states annually.

“In 1872, Nebraska was the first state to celebrate Arbor Day, and their intent was to beautify the plains,” she said. “Because plains aren't beautiful by themselves, they need to have trees in order to be beautiful,” Bain added with a laugh. Though our perception of the beauty of the prairie has somewhat changed today, that view was one of the main reasons the forest experiment was started in this area, said Richard Gilbert. “They truly viewed the grasslands as a wasteland,” Gilbert said.

Gilbert is manager of Bessey Nursery, the oldest federal tree nursery, started on the site of the brand-new forest in 1902. Based on the success of a trial planting in Holt County, University of Nebraska botanist Charles E. Bessey, with the help of the Forest Service chief, convinced President Roosevelt it was possible to plant a forest in the middle of the Nebraska prairie. The nursery grew seedlings for the hand-planted forest and distributed them to settlers for windbreaks. They started with seed stock from other nearby states—like South Dakota and Minnesota—with varying degrees of success.

“They had huge issues with the seedlings surviving here. We had lots of wind. It was very dry,” Gilbert said. Many seedlings also succumbed to fungus. Gilbert said this location, supplied with plenty of water from the Middle Loup River, is good for growing trees: the sandy soil here has more organic matter than the other 1902 site chosen along the Niobrara River further north. But still, Gilbert said it took the forest and nursery crews a while to figure out what they were doing.

“These trees that they were producing, they were small, they didn't have very good root systems, and then they'd take them out and plant them and maybe they'd plant them at the wrong time…” But as they learned from those mistakes, their plantings became more successful. That history can be seen in today’s forest. 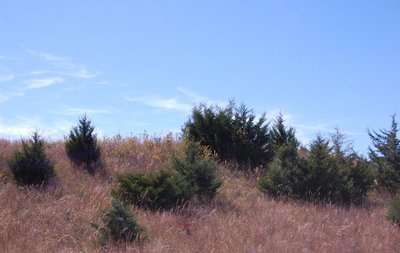 Eastern red cedar continues to spread across the Bessey Ranger District and neighboring Sandhills, reducing forage and grassland habitat. The forest will start a prescribed burn program in the next couple years to remove cedar from the grasslands. 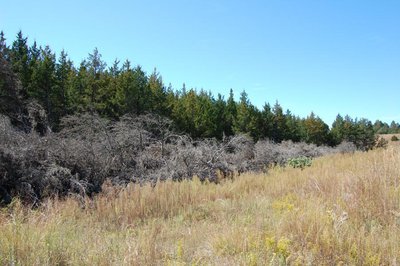 Commercial tree thinning can cost upwards of 500 dollars per acre, so the district does their own thinning, even though it is time and labor intensive. In the photo above, cut trees piled along the road wait to be burned.

A wildlife swept through the area seen above in 2012, clearing out some ponderosa pine and rejuvenating the grasslands.

“In the beginning because they had so many issues, they planted those trees very very tight together. And that was fine when they were having really poor survival. Once they were doing better and they actually got rain, that's when they ran into trouble,” Gilbert said.

Off a sandy road in the forest, Bain walks up to a stand of eastern red cedar, pointing to the trees planted in straight, orderly lines, four feet apart. Those high-survival rates among later seedlings combined with too-tight planting and a century of wildfire suppression mean today's forest is now overstocked. Bain said these tightly-packed cedars have made their own cloistered environment.

“If the biologist was here, he would tell you that this is not really good habitat for anything. It's just too dense and there's no good understory. A lot of critters like different mixed habitats,” Bain said.

To manage the forest for cattle grazing, recreation and ecosystem health today, the district needs to clear out some of the trees. At another spot in the forest, Bain points to a stand of jack pine where this is starting to happen naturally.

“Here would be a good example of a place that, the species, if it's not replanted, it's probably going to go away,” Bain said. The tall, skinny trees ahead of us look withered, as if they’d been through a fire. The majority of these trees are dead or dying, Bain said. “And it's not because there's been any disease, it's because they live to be about 80 years old. And this is it for them.”

While jack pine may be dying off, much of the forest consists of ponderosa pine and eastern red cedar—two species native to Nebraska that should survive for at least another hundred years. Rocky Mountain juniper, Scotch and Austrian pine, douglas fir and white fir are among other trees planted in the forest, along with a variety of hardwoods. But the timber industry never took off at Bessey. The trees never really got big enough, and better timber elsewhere became available. Those challenges remain today – combined with the fact that the forest’s sandy roads make it hard to maneuver heavy logging equipment. So the district has to thin the forest on their own, which is time and labor-intensive.

They’re also planning to conduct prescribed burns next year. A few miles down the road, Bain shows where a wildfire burned through in 2012, clearing out stands of ponderosa pine.

“The one great thing about prescribed burns is that sometimes in a certain area it will get really hot and it blows out a clump of trees and that's perfect. So it kills some trees, it gives snags for animals and it's just more natural,” Bain said. 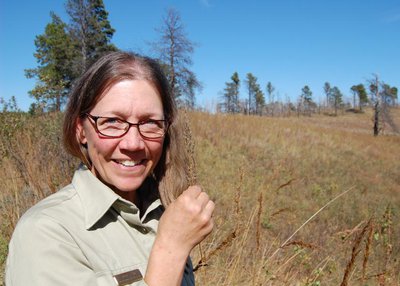 Julie Bain is district ranger at the Bessey Ranger District of the Nebraska National Forest near Halsey.

She points to where the grass has grown back strong without any reseeding, and said examples like this are helping local ranchers start to change their minds about the benefits of prescribed fire. A wildfire in 1965 killed one-third of the forest, and the district hasn’t done a major replanting in decades. While some of the ponderosa pine trees are regenerating, Bain said it’s not enough to replace the mature stands that make up the forest today.

By contrast, eastern red cedar continues to spread across the Bessey district and surrounding Sandhills, reducing forage and grassland habitat. Bain said they’ll be focusing on reducing cedar in the next couple years.

With all the thinning and burning plans, Bain said they not only take into account grazing and recreation uses of the forest but also the habitat it provides for animals that have come to rely on the trees, like deer or woodpeckers.

“If we let the forest die, or not come back or don't replant it, you're taking away the home of those species. So we've definitely created kind of an experiment here that we haven't through to the end yet,” Bain said.

So what will this man-made forest look like decades from now? Would they replant it if a wildfire swept through and burned it all down? Bain isn’t sure. For now, the district is focused on keeping the forest healthy while they, along with members of the public, begin to think about how to manage it for the next century.

Watch a video report on the forest produced on occasion of its centennial anniversary in 2002: