Ten years ago today a group of Nebraska Army National Guard soldiers was in a life or death battle on a highway in Iraq. Mike Tobias looks back at the Battle of Bismarck, with reflections from the soldiers who fought it.

The Battle of Bismarck, from a vehicle camera (courtesy Nebraska National Guard)

Jenny Bos and A.J. Bloebaum talk about the Battle of Bismarck, and challenges they dealt with after deployment, in this segment from the NET News project "Generations of Nebraska Warriors"

“One of the most beautiful days I can remember weather wise, the entire deployment I was over there,” is how Jay Schrad remembered the morning of March 20, 2005.

Schrad and 13 other soldiers from the Nebraska Army National Guard’s 1075th Transportation Company were rolling out of a base in Kuwait, taking a 33-vehicle supply convoy into Iraq. They were young, most in their early 20s. Most were from the Columbus area. They’d been doing this for several months at this point, halfway through the deployment. This convoy included pairs of Nebraska soldiers in green semi-trucks, civilians driving white semis and three Humvee gun trucks providing security.

They had been attacked on previous missions with roadside bombs and small arms fire, which was no surprise, because regardless of tactics, mile long convoys attract attention in a war zone. “We made our presence known,” A.J. Bloebaum said. “They knew when we were coming.”

But they’d always sped away from the trouble.

“You’re in a semi with a 40-foot trailer. You’re not equipped to sit there and fight,” said Josh Birkel. “So our SOP (Standard Operating Procedure) honestly was to hit the gas go.”

Normally this worked. But soldiers say that beautiful day, 10 years ago, was different from the moment their trucks pulled out on a four-lane divided highway called Route Bismarck.

“There were things that kind of triggered a sense of, hey, there’s something weird going on today,” recalled Schrad, driving a semi toward the back of the convoy. 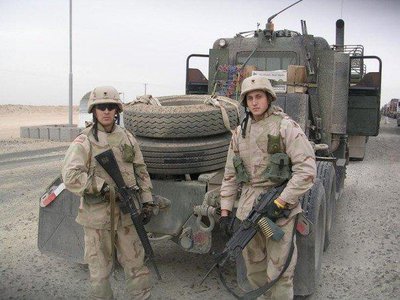 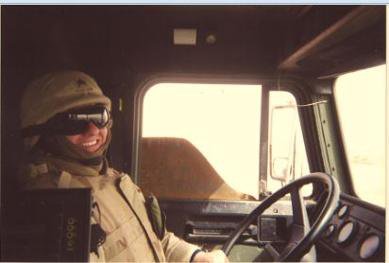 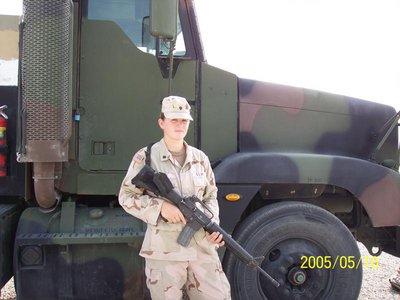 In 2006, Lt. Col. Kevin Hynes, Nebraska National Guard state public affairs officer, wrote an in-depth four-part series on the Battle of Bismarck for the Guard's "Prairie Soldier" publication. Click on these links to read the articles:

Odd things they hadn’t seen before. A small roadside protest, then an Iraqi police officer shouldering a grenade launcher. Jenny Beck was driving a truck toward the middle of the convoy. Her future husband Tim Bos a few trucks ahead.

“I remember telling Tim that I didn’t want to leave that morning,” Beck said. “I don’t know why, but there was just something that it didn’t feel right.”

Premonitions became reality shortly before noon. Bloebaum was riding in the passenger seat next to Beck. On a radio, they heard something happening to the gun truck leading the convoy.

“Through the radio mic you can hear that she was getting blasted by an automatic weapon. That was the start,” Bloebaum remembered.

“And there was a van coming down the opposite side of the road and then an IED (Improvised Explosive Device) hit it and flipped it over in front of the convoy," Beck said. “Trying to completely block our convoy from the front to end is the thinking.”

“That’s what we assumed, they were trying to stop the convoy,” Bloebaum added.

It worked. The convoy was bottlenecked. Water and mud on either side of the highway kept trucks from going around; flooding ditches was believed to be another part of the ambush.

“On a two-lane road when you have mud on your left and on your right, and you know that somebody’s already stuck, the whole road is blocked with trucks at that point,” Beck said.

“You’re bumper-to-bumper,” Bloebaum added, “and there’s no way to get a 60-foot truck backed up right away and get moving.”

Civilian truck drivers from countries like Pakistan and Turkey abandoned their unprotected trucks and ran for cover, adding to the traffic jam. This was understandable; from ditches and buildings in this open area, 40 to 50 attackers showered the convoy with bullets and rocket-propelled grenades.

“I think it probably kind of set in for me when you started hearing some of your buddies on the radio that they were hit,” remembered Birkel.

“Jake (Graff) came over the radio and he said they were taking contact from the left side, and it was more than just a regular radio call. It was a pretty intense scream,” added Schrad, who was in the same truck as Birkel. “Shortly after that he came back and he said that ‘Harris is hit, Harris is hit.’ Then there (was) more radio chatter and then he (Graff) said, ‘I’m hit. I’m hit.’ At that point it got scary.”

“After a few minutes, one of the first things that came to my mind,” said Birkel, “I thought ‘well, I’m 21 and I guess I lived my 21 years, and this is where it’s going to end.’ But I didn’t want to sit in my truck and end it that way. I thought if this is going to be it, I might as well fight for it.”

What happened next was a mix of confusion, coolness and courage under fire. John Harris and Jacob Graff, both wounded, managed to maneuver their truck to safety. Ricky DeLancey and Terry Ricketts were both badly wounded, their truck disabled. From inside, DeLancey kicked out the windshield, crawled on the hood of the truck and held off advancing insurgents with his machine gun. After moving closer, Beck left her truck and helped get DeLancey inside. There wasn’t enough room for Ricketts, so she pulled him from the truck until more help arrived.

“I think it just all came down to everybody reacted the best that they could at the moment with what they thought was the best,” Beck said.

Josh Birkel and Mike Sharples left their trucks to round-up civilian drivers so they could get those trucks moving.

“We’d run alongside the truck together and any gaps between the trucks, we’d take turns,” Birkel recalled. “One guy would go. The other one would cover you and so forth. That’s kind of how we worked our way up the convoy. Then as we would encounter the drivers, we were basically yelling at them to get back in their trucks, and they didn’t want to. So a couple of them we had to actually point our weapon at them and basically say, ‘you need to get in your truck so we can all get out of here.’”

They would also reach Ricketts and get him to safety. A unit of Kentucky National Guardsmen arrived to help, and gradually the convoy escaped the kill zone. After 20 minutes or so, the Battle of Bismarck was over. The four wounded Nebraska soldiers were evacuated for treatment. The other 10 continued the convoy mission.

“I’m sure it was a miracle that it went as good as it did and I thank God that it did,” Birkel said. “I think at certain points your training kicks in and then your fight to survive kicks in.”

“I think that ultimately they were just waiting to completely disable the convoy enough to where they could take prisoners, honestly,” Schrad reflected. “You could tell it was very planned, but they didn’t succeed which I’m very thankful for. I don’t think they could have run into a worse group at that time, I feel very confident in saying that. I think that they just ran into the wrong group of guys and ladies at that day and time.”

Like they do every year, the 14 veterans of the Battle of Bismarck will get together this weekend in Columbus on the anniversary of the battle. Not everyone makes it, but many do. They don’t reflect a lot about the battle; they joke and talk about things like their families and their jobs.

Only four are still in the Guard, including Jenny Beck (now Bos), A.J. Bloebaum and Josh Birkels. But none will likely forget that day a decade ago.

“Around this time every year I can feel it,” Schrad said. “You can probably see it in me right now. It’s hard to relive it, and it might sound goofy but I’m almost scared of forgetting stuff about it.”

“It made me put a lot of things in perspective,” Schrad added. “What things are truly important, what things maybe aren’t as important as I thought.”

VIDEO: The Battle of Bismarck, from a vehicle camera (courtesy Nebraska National Guard)