A proposal to cut state income taxes prompted a wide-ranging discussion of Nebraska’s tax problems in a public hearing Wednesday. And debate continued on updating a state law about teaching civics in schools.

Hilgers told the Revenue Committee in the short term, farmers and homeowners face a crisis in the level of property taxes they pay. However, he added “At the same time, the economic growth side of the equation also should be addressed, in my view. And that doesn’t exclude tackling property taxes – you can’t grow if your agriculture sector’s not growing. But it also involves other parts of our tax code. And so one of the things that I think in Nebraska that is a deterrent to growth, it harms our growth, is our income tax and corporate tax structure as well,” Hilgers said.

The proposal was supported at the hearing by business community representatives including Joseph Young, representing the state and Lincoln Chambers of Commerce, Nebraska Bankers, and the National Federation of Independent Business. Sen. Tom Briese, who has made reducing property taxes a priority, asked how to achieve that goal. Young replied that with 244 school districts, 93 counties and many different municipalities having the power to levy property taxes, responsibility is spread out. “It’s very difficult to go lobby all of those entities to try to lower property tax rates and collections. So honestly, if you wanted to long-term really do something about the property tax issues in the state -- I know this is going to sound radical -- but you make it a state property tax so that the citizens of Nebraska would only have to come to one place to do that,” Young said.

There used to be a state property tax, but Nebraskans abolished it by popular initiative in 1966. The Legislature then replaced it by instituting a sales and income tax.

Sen. Curt Friesen, who farms near Henderson, said farmers aren’t so worried about income taxes these days. “Farmers have already fixed the problem of the income tax being too high. We have a high enough deduction on property taxes -- we don’t pay income tax,” Friesen said.

Renee Fry of the Open Sky Policy Institute opposed Hilgers’ income tax reduction bill, saying it would require income tax cuts even when revenues were dropping, if projections were wrong. “These tax cuts would have compounded cuts to education, public safety and other vital services and wouldn’t have been sustainable,” Fry said.

Linehan said Fry was referring to reducing the size of a projected increase. “We have not made a cut to TEEOSA,” Linehan said.

“If you look at spending as a share of the economy, it’s a decline,” Fry said.

Linehan said she was referring to a cut in real dollars.

“No, but it costs more to do the same thing year over year,” Fry replied.

In absolute dollars, TEEOSA was last cut in fiscal 2011-2012. It has gone up every year since, though often by less than called for by the state aid formula. 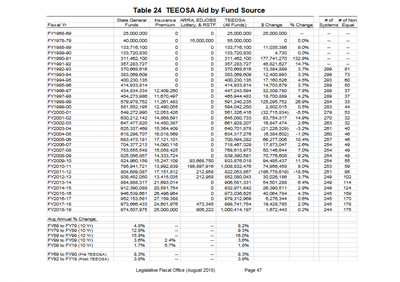 John Hansen of the Nebraska Farmers Union said Hilger’s bill risked repeating a pattern. “We’ll short the kitty for the total cost of K-12 education, and then we’ll let property pick up the slack,” Hansen said.

The committee took no action on Hilger’s proposal, but he said he hopes members will keep it in mind as they work on whatever proposal they eventually recommend to the full Legislature.

And in debate by the full Legislature Wednesday morning, senators continued to consider a law from the 1940s requiring the teaching of “Americanism.” Sen. Julie Slama wants to update it to refer to teaching American civics. And she wants to make other changes, including saying failure to follow the statute may be considered a cause for dismissal, rather than shall be.

Sen. Ernie Chambers, who objects to the entire law, nevertheless argued that change could allow for ambiguity, and asked Slama about that. “Why not say it ‘shall’ be a cause for dismissal?” Chambers asked.

“Because you could have different levels of failure to follow through on the statute. Failure to teach Flag Day, in my opinion, shouldn’t be cause for automatic dismissal. And that’s failure to enforce the statute,” Slama said.

Flag Day is specifically mentioned in the current law, although under the amended version favored by Slama, it would be dropped.

Senators voted 27-19 against an amendment by Sen. Kate Bolz that would have removed any mention of dismissal. They then switched to debating other matters before reaching a vote on the bill itself. But Speaker of the Legislature Jim Scheer said it has enough support that he will put it back on the agenda for further consideration Friday.

Scheer’s office also said a proposal to ban the use of eminent domain for transmission lines to connect to privately-owned generating facilities, such as wind farms, will be debate sometime next week. The bill by Sen. Tom Brewer advanced out of the Natural Resources Committee on a 6-1 vote.

The proposal is one front in a struggle between some residents who fear wind farms will spoil the landscape and damage the fragile soil of the Sandhills, versus residents and wind developers who see wind power as an opportunity for economic improvement and clean energy development.