The debate on taxes came on the same day as the Appropriations Committee was discussing further cuts to balance the state’s budget in light of reduced revenue projections. Bellevue Sen. Sue Crawford said constituents who were contacting her questioned the timing of the tax cut proposal. “They’re very concerned that we would be passing a policy now to cut taxes at the same year that we are facing these tough cuts to our programs that serve our families and (they have) concerns about the impacts of those cuts on education, tuition costs, health care costs, day care costs for those families. I’m very concerned about that,” Crawford said.

Sen. Jim Smith of Papillion, chief sponsor of the bill supported by Gov. Pete Ricketts, said it was designed to stimulate growth and prevent future budget problems. “Friends and colleagues, if we don’t do something, we’re going to be facing this same situation year after year after year. Our path forward is to grow our state’s economy. Our path forward is to diversify our employment base – to grow businesses inside of our state, yes, and to attract businesses from outside of our state -- but keep our people here. If we don’t do this, we’re going to continue to face these budget woes. This tax bill as amended will position our state for growth, and will provide tax relief that our families and businesses deserve,” Smith said.

The proposal would have lowered the state’s top personal income tax rate over time from just under 7 to just under 6 percent. It would also have limited ag land valuation increases for property tax purposes to three and a half percent a year. But Sen. Paul Schumacher said tax levy increases could negate any advantage from doing that. “You don’t pay your property taxes in valuations. You pay them in dollars. And if that property tax bill – the number of dollars you’ve got to write a check for -- remains roughly the same, you haven’t accomplished much,” Schumacher said.

But Sen. Joni Albrecht of Thurston said lawmakers needed to take action. “I agree with the sentiment of some that the relief doesn’t go far enough for ag producers. God knows, I’d like to see a whole bunch more for the ag producers. But something is better than nothing. If we don’t take action on this issue, we’re going to be right back where we began,” Albrecht said.

While senators were debating, discussions were underway on possible amendments to the bill to make it more attractive to people primarily concerned with property tax relief. Sen. Matt Williams alluded to that in announcing his support. “I’m going to vote to advance (LB)461 to the next level of debate, not because I support it in its present form, but because I believe we owe the state the opportunity to continue the discussion concerning tax reform,” Williams said.

But there was not enough even of such conditional support to keep the plan alive. When the time came for a cloture vote, which required 33 votes to keep the bill alive, only 27 senators supported it. 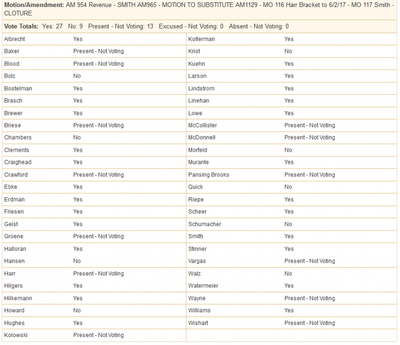 This was the cloture vote on the tax bill. A "yes" vote was to keep the bill alive. It would have taken 33 votes to accomplish that.

Afterward, Smith expressed disappointment. “That was our shot at comprehensive tax relief for the year. That’s not to say that something can’t come back next year,” Smith said. “I will continue to try to find a path forward to be able to get tax relief for our families and our businesses and to create a tax environment that we can actually grow our economy.”