Philip Kelly says there’s always something that needs to be fixed in Yale, Oklahoma.

As both the police chief and interim city manager of the town of about 1,300, he can point out all the projects in town: from tearing down the crumbling century-old buildings to improving the sidewalks and curbs on the main road. Sometimes, the amount of fixes needed can be overwhelming.

“It seems like every time we get to do a project, a water line breaks or sewer line breaks, or we have an electrical issue that we have to leave what we were going to do and then go fix that,” Kelly says. “It's like, everything around here is becoming an emergency.”

Alongside balancing his roles as police chief and city manager, Kelly is also on a county committee that aims to get as many people as possible to respond to the 2020 census. It’s important to him, he says, because it helps with grant applications and state funding. But, the amount of people in Yale who filled out their census on their own is lower this year — about 45% compared to 57% in 2010. Kelly says he only has one guess as to why.

“I don't understand other than it's COVID-19 related,” Kelly says.

Residents in Yale had a variety of reasons why they haven’t responded. Belinda Dawson says she didn’t take the time to fill it out. Gary Grimm, on the other hand, had another reason.

“I think that's the way the government is trying to keep track of you, and I just don't think they need to know everything I do,” Grimm says.

The answer for the low self-response rate is complicated. Steven Romalewski, who oversees the Census Hard to Count Map at the City University of New York, says there are historically hard to count communities, like non-English speakers, low-income households and people without internet access.

The U.S. Census Bureau paused much of its in-person counting earlier this Spring. So, he says some people may not be aware that the census is still happening and makes rural engagement efforts more difficult.

“It is likely much harder for census stakeholders, community groups, business groups, religious organizations who are trying to get the word out about the census,” Romalewski says.

A matter of funding

The city of Yale isn’t the only town in Oklahoma that has been lagging behind in response rates. Oklahoma ranks 42 in self-response rates, according to the U.S. Census Bureau. The nonprofit Housing Assistance Council reports that rural and small towns had a response rate of 53% as of May, compared to 66% in suburbs. The lag has all sorts of groups worried, and a low response could cost states like Oklahoma millions of dollars.

Josh McGoldrick, the chief of staff and general counsel for the Oklahoma Department of Commerce, estimates for every person that does not fill out the census, the state loses $1,675 each year in federal funding. 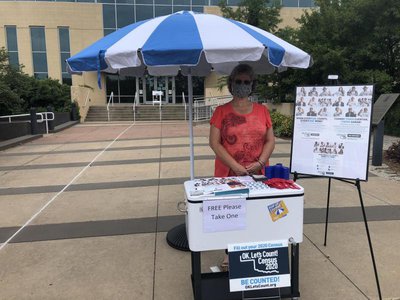 Paula Dennison, Stillwater assistant city manager, stands behind a "pop-up city hall" advertising the 2020 census. Dennison says the city planned to use the booth at events, but the COVID-19 pandemic disrupted those plans. (Photo by Seth Bodine Harvest Public Media)

55 are specifically targeted for rural communities

Reamer says census data is used to determine what areas are rural and urban, which determines the eligibility of cities for certain programs.

“Data from the census are used for many programs to determine eligibility,” Reamer says. “In other words, can you get a slice of the pie? And then if you're eligible, how much you get.”

For cities like Stillwater, the classification matters. Paula Dennison, Stillwater’s assistant city manager, says the city is categorized as a small city when they apply for Federal Community Block Grant funds, based on 2010 census data — which makes them compete with other cities between 15,000-50,000 people. Being counted as a population of more than 50,000 could mean that the city would qualify for more than $500,000 in Community Development Block Grant funds by next year.

“Right now, under small cities, it's barely over $100,000,” Dennison says. “So there's a big difference in how much money we can get through grants into the city.”

Before the COVID-19 pandemic, Dennison says the city was using what she calls a “pop-up city hall,” a cart similar to a hotdog stand with a big umbrella with information about the census and Ipads to fill out the questionnaire. But since the pandemic, the city has had to adapt engagement efforts, Dennison says.

The Stillwater library is now loaning Ipads to community groups, so people can fill out the questionnaires. Dennison also says social media posts have been helpful.

“Social media, that is just a godsend in the time of a pandemic like we're in now,” Dennison says.

COVID-19 has also affected Yale’s plans to get people to fill out the form. Miranda Brown, who works at the town’s public library says they were in the early stages of figuring out how to help people fill out census forms when they had to shut down. Instead, they had to rely on their website, and now that the library has reopened, posters about the census.

Kelly says there’s not a ton of options left other than advertising on Facebook and in the local newspaper, but he still believes there’s a lot at stake.

“Because otherwise the state's going to be losing a lot of money for education, roads, just everything,” Kelly says.

The Census Bureau is starting to knock on doors in certain areas of Oklahoma and in other states, and the deadline for self-response has been extended.

Harvest Public Media is a reporting collaboration focused on issues of food, fuel, and field. Harvest covers these agriculture-related topics through an expanding network of reporters and partner stations throughout the Midwest. Follow Seth on Twitter: @sbodine120