In Nebraska, Families Come Together to Hunt for Morel Mushrooms 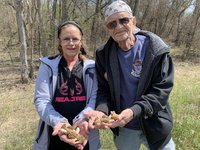 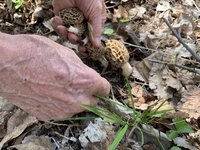 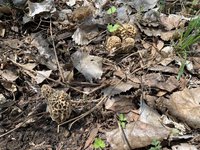 Morel mushroom hunting season has started in Nebraska. The mushrooms are hollow, sponge-like, and edible, but hard to find. Searching for the elusive mushrooms is like a treasure hunt along river bottoms in the Missouri and North Platte rivers.

The Start of the Season

Wendy Porter is hunting morel mushrooms with her father at Desoto National Wildlife Refuge along the Missouri River. The 51-year-old Nebraskan has been hunting them for 30 years. She even started a Facebook group for morel mushroom hunting in Nebraska back in 2018. The group now has over 2,500 members. 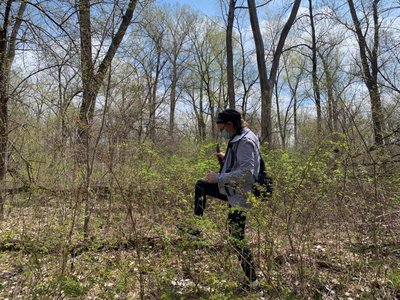 “This is how much I love mushroom hunting. I would go regardless, even going through chemo and feeling sick. I still went the whole time,” she says.

Porter’s father, Roger Jensen, is from Council Bluffs, Iowa. Two knee replacements and a shoulder replacement didn’t stop the 70-year-old either. He goes out five times every two weeks with Porter. Sometimes his granddaughter and great grandkids come along.

Her father, Phill Finch, wasn’t much of a talker but he loved morel mushroom hunting. They hunted together every spring until he got sick with COVID-19 and had a heart attack.

“He passed Feb. 24,” she says. “So the last time we actually got to mushroom hunt together was last spring.”

“The one thing a morel hunter will never do is tell people exactly where they're going,” he says.

Hunters are worried about people finding their secret spot and getting their mushrooms. Morels are hard to find because they require very specific conditions to grow. The ground temperatures need to be between 55 and 60 degrees, and they only grow near freshly dead trees that still have a lot of bark on them.

However, last spring and the year before weren’t very good seasons, according to morel mushroom hunting expert Tersh Kepler.

“Morel hunting is absolutely terrible because the land just gets wiped from the flooding we had a couple of years ago. And so it's not good hunting the year after a flood,” he says. “But, right now we're at a perfect time two years after the flood. So I predict this is going to be a really good year and we should be hunting them in Nebraska right to the very end of May.”

Kepler says morel mushroom hunting is extremely popular in Nebraska as it is in many other states. They sell an average of $25 to $40 a pound, even more when the season ends.

“What makes them so popular is the fact that no one has been able to figure out how to commercially grow them yet,” he says. “So they're usually in season depending on where you live for about six weeks out of the year.”

Greg Wagner with the Nebraska Game and Parks Commission says hundreds of people hunt in their state parks, where it’s legal to harvest mushrooms for individual purposes, but not for commercial purposes.

“The appeal for people to go out and hunt morel mushrooms is the fantastic taste of them. There's nothing that tastes as earthy and peanutty as these morel mushrooms,” he says.

Wagner enjoys them fried in butter and garlic. He says there’s nothing else like the nature scavenger hunt while spring awakens.

“Morel mushroom hunting has been historically quite the pastime in Nebraska. This is one of Nebraska's biggest pastimes and a lot of people really get into this,” Wagner says. 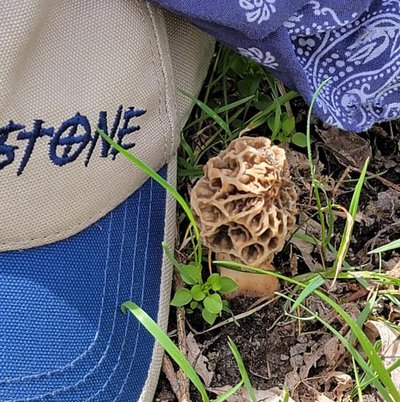 Kristi Jones takes a picture of a morel mushroom with her dad's handkerchief and Yellowstone cap (Photo Courtesy Kristi Jones).

A few weeks ago, Kristi Jones went hunting with her sons and nephew for the first time without her father. They’ve been hunting for nearly an hour and almost gave up when Jones was walking on a path while talking to her son.

“I just kind of stopped and looked down, and I saw one. I just looked at Matthew, my son, and I looked down and I said, ‘Thanks, Dad,” she says. “And put his hat down and put his hankie down and bend down for the picture. And then there were about nine more right around that one. And I just really felt dad there going, ‘here you go, find the cluster.”

Jones says it’s bittersweet to hunt without her dad but she’ll never give it up.

“And I know my boys are planning to pass it down when they have kids. It'll just be a tradition that continues in our family,” she says. “And I'm sure they'll tell stories to their kids about their grandpa.”

Hunting season in Nebraska starts April 15 through May 30. Jones encourages hunters to enjoy the time in nature, and the peace, and quiet.. whether or not they find anything.