In 1969 Three Nebraska Brothers Died on the Same Ship; Their Names Still Not on Vietnam Memorial

The man from Rhode Island behind the guitar arrived at the party room at the VFW hall in north Omaha on a mission.

Navy Veteran Bill Thibeault told an attentive audience of 50 “it was a pleasure to be here." He also knew he was fortunate to be alive at all.

Thibeault did his tour of duty in Vietnam aboard the USS Frank Evans. 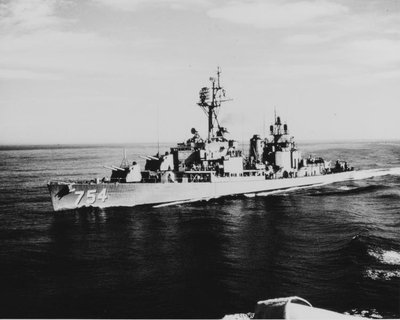 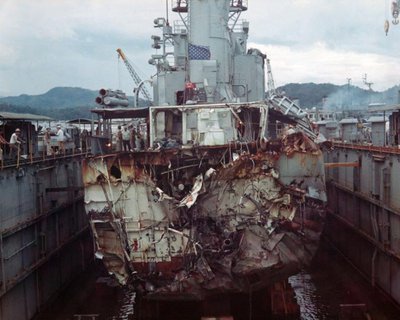 The remaining half of Evans in dry dock following the accident. (DoD File Photo) 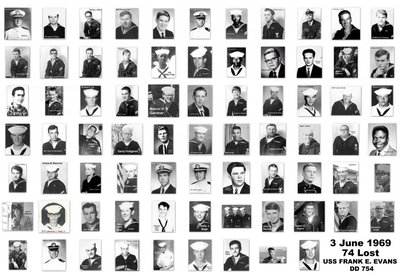 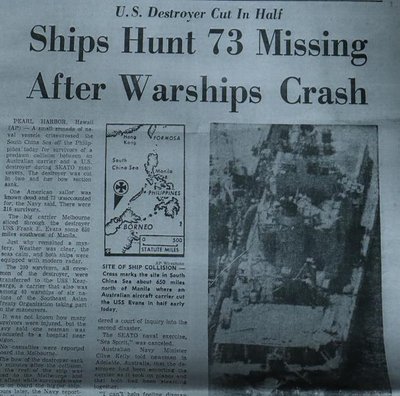 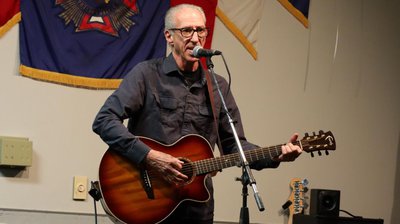 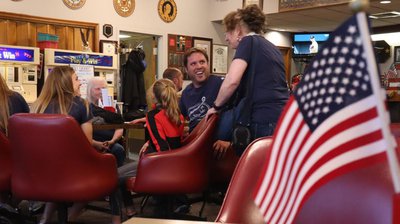 Linda Vaa (right) speaks with other relatives of the Sage Brothers at the VFW Hall in North Omaha. 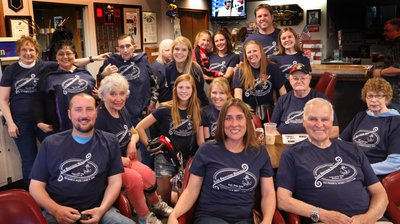 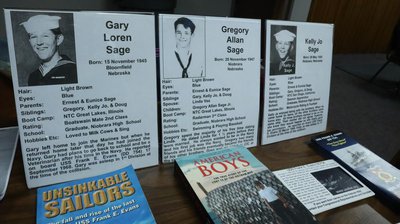 Several generations included on the Sage family tree gather for a group portrait.
A display honoring the brothers at the VFW event. (Photos by Bill Kelly, NET News)

“How many here are even aware of the Frank E. Evans and what happened to us?” he asked the audience.

With a show of hands, it appeared a third of the crowd didn’t know about the tragedy Thibeault survived that made headlines on June 3, 1969.

“I gotta tell ya, what happened that night affected everyone on that ship. We lost 74 guys who died.”

The last remaining small talk at the tables silenced.

“But for the rest of us who were on that ship, part of us died also.”

Thibault tours the country, often appearing before veterans’ groups, hoping through song to shine a light on a dark night in the South China Sea.

With simple chords on this guitar, the slender singer with a wavering voice sang:

One fateful morning on the third of June,
The Evans crashed under a bright lit moon.
Half of the ship when down real fast;
For 74 souls, the day would be their last.

The Nebraska stop was especially important for Thibault.

Fifty years ago, the Sage family of Niobrara, Nebraska grieved the loss of three of their sons, all sailors. A hometown monument memorializes the brothers, yet it’s been a struggle to preserve their place in the history of the Vietnam War.

The names of Greg, Gary and Kelly Jo Sage are not included on The Wall, arguably one of the most famous sites in the world honoring the casualties of any war. None of those lost aboard the USS Evans are listed on the memorial.

In 1969, the USS Evans spent much of its time offshore, pounding Viet Cong positions with artillery fire.

Steve Krause served on the ship and recalls the crew loved their vessel, a Naval relic that had seen action in both World War Two and offshore from Korea. Krause also said there was nothing fancy about the Evans and “there wasn’t much to it. It lacked a lot of amenities” and was often uncomfortably hot below decks. He spoke to NET News by phone from his home in California.

That May, the ship pulled out of the war zone to take part in a training exercise, alongside the HMAS Melbourne, an Australian aircraft carrier. The maneuvers were concluding, but the participating ships were still “dark.” Lights were off, and signals were silent.

Krause stood on the signal bridge “as high as you can get without being on the mast.” In the darkness, before dawn, he recalled the ship “zig-zagged most of the night around the carrier” when the ship started to make a right turn at about 21 knots.

“And I looked up, and I could see the carrier coming straight at us, and I just hit the button (to alert the ship) and said, ‘We’re going to get hit.’ And that’s right about the time we got hit.”

The massive aircraft carrier crashed through the much smaller destroyer in a T-Bone formation, slicing the Evans in two.

"The ship all the way on its side, ninety degrees in the water,” Krause remembers, “and my signal shack, which was on the starboard side, the door is laying in the water. I kicked the door open (and) I swam and swam away.

“She sank faster than I could take the time to explain it.”

Two of Nebraska’s Sage brothers were below deck, likely sleeping before their morning duties. The third reportedly was on signal duty. Some reports indicate he may have headed below deck to assist others to safety, only to be taken down in the fast-moving wreckage.

“They were all in different places, which is amazing,” Krause said. “Three different locations. All three go down.”

The lyrics of Bill Thibeault’s song “Recognition” brought the story to the VFW hall in Omaha.

One fateful morning on the third of June
The Evans crashed under a bright lit moon
Half of the ship when down real fast;
For 74 souls, the day would be their last.

In the audience, several generations of the three Sage Brothers had gathered to hear the performance, including, Linda, the wife Gary Sage left behind with an 18-month-old baby.

When they died, Kelly was nineteen. Greg was 21 and Gary was 22, Linda told a visitor at the event that night. “One family giving up three sons. If anyone has one son that was lost, try to imagine it with three. And I think it’s a very important part of history.”

She remarried and today is Linda Vaa, but fifty-plus years later she is all smiles talking about the boy she met at the Knox County Fair. Greg “was a very quiet guy,” Linda recalled. He played football, performed in school plays and “got along” with “a lot of good friends.”

His older brother Gary “was a little quieter” and often could be found “in the kitchen helping his mother with the cooking.”

Kelly Jo was the youngest of the three entering the service and Linda remembers “he had a smile! He had a dimple and a smile.”

While he was last to enlist, seeing his brother’s home while on leave in their white Navy uniforms made an impression.

Not only was the sea duty the only option the boy considered, Linda says “when they asked him where he wanted to go he put the USS Frankie Evans and he got it.

“The boys were so excited because all three of them would be together.”

There were understandable worries about assigning the brothers to the same vessel.

In World War Two, the five Sullivan Brothers from Iowa perished together serving in the Navy. It became more difficult for family members to serve side-by-side, not impossible.

In this war, father Ernie Sage stood by his son’s decision.

Linda believes, “Ernie wanted them in the Navy because it was safer.”

Linda was living in Omaha with their infant son that summer. Their father learned of the accident on the network news.

She learned later Ernie had been working in the fields on the family farm that June afternoon. When he came home “he turned the TV on and there it was on television, Walter Cronkite. The USS Frankie Evans has been cut in half.”

Linda said Mr. Sage, “let out a scream,” and when his wife Eunice heard it,” she came in and passed out.”

Most of the crew was never recovered from the South China Sea. Three, tri-fold American flags represented the brothers at the funeral which drew international attention.

In his eulogy, Nebraska Governor Norbert Tiemann told the gathered “every generation of Americans answers the call to colors. So it was with the Sage Brothers who were serving in the finest tradition of the American fighting man.”

In the 1980s, the family learned the Vietnam Memorial was being created, listing the names of every combat death during the war.

When Linda Vaa requested a list of those to be memorialized, she was stunned to find the names of the three Sage Brothers are not in there. None of those lost on the USS Frank Evens were to be inscribed in the black granite façade.

She wrote the office administering the project, thinking there had been a mistake, “and she wrote back and said they didn’t deserve to be on the wall.

“I had to tell my father-in-law the names of his three sons were not going to be on the wall.”

For some, the decision was not entirely unexpected. At the time of the accident, the casualties aboard the ship had not been listed among the regular tally of war dead.

The naval exercise underway when the accident occurred fell just outside the designated zone, qualifying them as casualties of war. The Department of Defense shows no signs of granting an exception.

Evans survivor Steve Krause, now the president of the USS Frank E. Evans Association, is not the only one to speculate the Pentagon was under pressure from newly-elected President Richard Nixon to suppress the “body count” being regularly reported in newspapers and on television.

The Department of Defense ruled since the USS Evans had been taking part in a training exercise and officially outside the boundaries of the “war zone” the deaths did not qualify as deaths in service of the conflict. Only weeks earlier the ship had been actively involved in its mission to batter the Viet Cong with artillery fire from its offshore post. 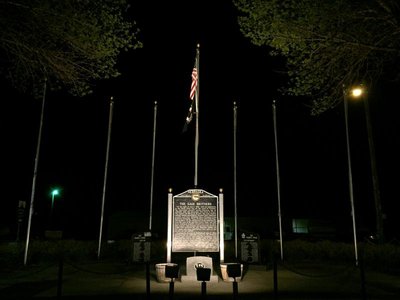 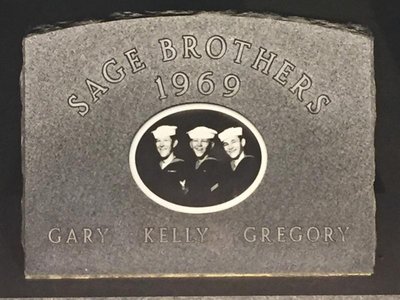 “It’s a major irritant for our members that our government can’t just say let’s honor these guys for giving up their lives for our country,” Krause said.

There have been multiple appeals to the Pentagon, the White House and members of Congress over the years and a new initiative is being advanced this year. The 74 dead from the Evans have not been added to the Wall.

The Sage Brothers are memorialized with a historic marker by the state of Nebraska in their hometown of Niobrara. Other tributes to individual crew members are found around the country.

Survivors of the accident and families of those lost share Linda Vaa’s view of why the young men from Nebraska deserve their recognition in history and on the most prominent recognition of the American dead from the Vietnam War.

We were just young American boys
Fighting in a foreign war.

But for 74 men who died in ‘69
Their rightful place is still being denied.