It’s a worst-case scenario that medical experts consider likely. The flu or bioterrorism. We’ve heard a lot about how hospitals should respond. But what about the legal system? 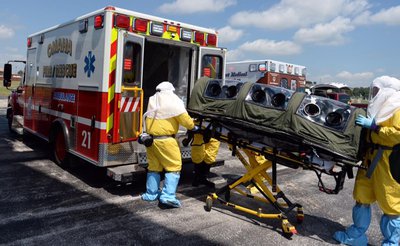 Training for transportation of Ebola patients to the University of Nebraska Medical Center from Offutt Air Force Base. (Photo: Department of Defense)

Nebraska created a policy guide for the state’s judges and courthouse staff. It lays out plans for how the courts function when much of a community face illness or death on a large scale. It’s common to have “bench books” ready in case of a natural disaster or other disruptions to daily operations. Creating one for the onset of a pandemic is all new for the state.

A task force led by Douglas County District Judge Leigh Anne Retelsdorf authored the book. She said preparing a plan in Nebraska’s courts made sense since a world-renowned biocontainment facility found a home at the University of Nebraska Medical Center.

NET News has provided extensive coverage of how the state would respond in the event of the arrival of a highly infectious disease, including our award-winning documentary AFTER EBOLA. Watch it HERE.

6 Things to know about Zika & Nebraska 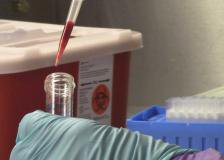 WATCH: How are lab tests done in Biocontainment? 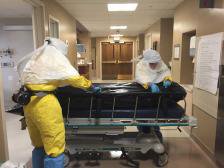 WATCH: What is done to safely and respectfully process human remains? 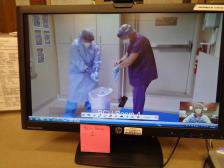 WATCH: How is biohazard trash disposed on the biocontainment unit?

International attention was directed towards the Omaha facility when, in 2014, the specialized staff was tasked with treating three patients who had contracted the Ebola virus in Africa.

“From the attention that came from Ebola being brought into the country and into our local area, Chief Justice Mike Heavican felt Nebraska should be prepared,” Retelsdorf said.

The book became the model for other courts to follow and was recently made available by the State Justice Institute. It was also the centerpiece for discussion at a national conference convened at UNMC in May 2019.

During an interview with NET News, Retelsdorf explained why courts needed to consider the impact of a pandemic or bioterrorism event on the state’s court system.

Bill Kelly (NET News): The courts of Nebraska have not had guides in how to respond in case of a pandemic or public health emergency in the past. What's the quick answer as to why this was needed at all?

Judge Leigh Ann Retelsdorf: The National Center for State Courts had an initiative whereby they were assisting a number of jurisdictions in putting together these kinds of emergency response bench books, or guides. Florida, where they have hurricanes or California fires. Natural disasters that end up devastating cities, and courthouses, and branch courthouses. Nebraska had some local areas have things for things like natural weather disasters, tornadoes and those things.

With the attention that came with the Ebola coming into the country, especially at UNMC (the University of Nebraska Medical Center) into our local area, the chief justice felt that it would be good to look to the National Center for State Courts to see what they had. He felt that Nebraska should be prepared.

Kelly: What was the goal for this book?

Retelsdorf: We call them bench books. (This) is just a guide for judges that tries to cover the kinds of issues that will come in in front of the court if there was an epidemic or a pandemic. The kinds of issues that the court system itself would have to deal with. The goal was to identify those issues, the circumstances under which they would arise locally, statewide, and try to put some protocols and guides in place for judges to use so there's some uniformity in addressing something like that in the nature of that kind of an issue.

Kelly: In the event of a public health emergency, like a major onset of flu, or an incident involving radiation, you've got the (Nebraska) Department of Health and Human Services, or a local health department, (which) have the power to issue a “directed health measure,” an emergency order that might require a segment of the community to be isolated or quarantined, or even decontaminated.

Retelsdorf: That can apply to people or property. They can quarantine you to your home, or they can make a particular location inaccessible.

Kelly: They can do that without the governor, or even a court order at that stage. What is the role of the courts when such a serious measure as that is put into place?

Kelly: There are people who based on what they've seen in the movies, or read online with conspiracy theories, or whatever, they might assume that people who are isolated when they're sick, or quarantined, because they're at risk, that they wouldn't have any rights in this case. There actually are rights to appeal.

Retelsdorf: Sure. There's always due process rights. People always have the ability to appeal. It depends on how restrictive the order is. I think we recall, on the East Coast, there was, I can't remember the jurisdiction where the nurse had been potentially exposed to Ebola, but for a number of months had no signs of the disease and contested her quarantine.

I imagine that that could occur. They do have rights, certainly. The question is though, not so much how do we contest it but how, if someone is quarantined, (can we hold a court hearing)? Obviously, we can't go there and do it. It depends on where they are quarantined. But we have to be able to do a lot by digital, or video, and those kinds of things.

Kelly: Even under emergency like this, there are still some pretty fundamental constitutional issues that you have to deal with.

Retelsdorf: There are freedom to assemble, and property rights, and personal freedoms that are all affected by quarantines, or closing schools, closing churches, those kinds of things. They'll all occur, and they're all subject to coming into the court system.

Kelly: In those cases, how do the courts deal with somebody who does refuse to comply with an order like that?

Retelsdorf: The (Nebraska state) statutes have dealt with that by giving the sheriff's department and the police department ways to enforce those directive health measures, and then the majority of those are misdemeanors.

I think just my experience would be that the majority of people are going to be cooperative. I mean, if they've been exposed to something, you find that most people are very cooperative as long as they feel like they have some voice and some ability to get their case heard. I think what (the pandemic bench book does) is it educates the judges that if these things come in, these are ways to look at it, and ways to deal with it.

Kelly: The court protects the fairness of the applications of the law in part?

Retelsdorf: Well, the court is going to defer a lot to the public health departments, and to the physicians, and the doctors, and the people that are most educated in them. But make sure that the people to whom these directive health measures are being applied, that those people have some kind of a voice.

The one thing you don't want is wide-sweeping orders quarantining lots of people, closing buildings. If those orders could be tailored down to only affect maybe a smaller group of people, or a smaller number of locations.

Kelly: If there was a circumstance, like a major outbreak, contagious flu, on places like schools, or movie theaters, or other public gatherings are prohibited, the court system, according to this plan, still needs to be in session. How do you deal with it when defendants may be sick, and attorneys, and jurors, and judges could be at risk of becoming sick?

Retelsdorf: If people are quarantined, they're not able to come to the courthouse. In a criminal case, you have a six-month time frame from when the case is filed until that case needs to be tried. Under the constitution and the statutes, if you can't get jurors into a courthouse, and you can't get witnesses, and you can't get security, the courts have to be prepared for how to address that.

You may have to be prepared more for video conferencing. You look at the personnel that work in a courthouse. You have the clerk's office, you have the security personnel, you have the public coming and going, you have the judges, their staffs, the prosecutor's office (and) the defense attorneys. You expect that a number of those people will all be hit (by a pandemic) to the degree where those offices might not be able to function in any way but remotely. We have jurors (recruited) from the public that come in. How do you protect the jurors in your courthouse? Can we do juries remotely?

Kelly: You have thought about this a lot, and considered the issues, and researched it. I'm just curious if you got a little creeped out at the thought of an incident rising to the level of a pandemic in this case?

Retelsdorf: I don't know if it's creeped out, but it made me realize that it is a definite possibility that this could happen and no one would know and all of a sudden it would be here. I think the University of Nebraska Medical Center, people that are involved in the infectious disease unit over there, and the biocontainment, they were very instrumental in helping us with this. I think when I went and saw the unit, and I talked to them, and (saw) the reality of this as a possibility. They talk in terms of not if, but when.

Kelly: You talked to a wide range of people about this plan, were there concerns from some people about what circumstances might lead to a loss of civil liberties in the community?

Retelsdorf: People are worried about that. But those things were dealt with by the Legislature when they gave the Department of Health and Human Services and the local public health departments the authority to issue these emergency orders so that we can do these things. We try to tailor it as small as we can, but the public health interest has got to outweigh this at least immediately. Our idea is then the courts can help tailor those things down so it's the least possible restrictions that people can have, but still protect the public health.

Kelly: Coming out of this, what do you want the general public to know? And sometimes it's a public that's pretty skeptical and suspicious of government overreach and especially in emergencies. What do you want them to know about what this document means about the role of the government in a public health emergency?

Retelsdorf: I certainly don't want the average person sitting around worried about this every day. But I think actually the public actually expects us to be prepared for this. I want them to know the judiciary has thought about these issues, have looked at the laws that exist in the state of Nebraska, and have tried to figure out which ones are applicable ahead of time. When something like this happens, I hate (the idea of having) the first few people to be hapless guinea pigs. People need to be worried about themselves, their family, their health, their livelihood if something like this happens.

I guess really all I want them to know is that we have thought about this, and are taking steps to try to be prepared so that they don't have to think about it, because it's a scary thing.

Keystone XL Pipeline Back in Court. Here Are the Questions You Should Be Asking
Survey: Nebraskans Skeptical About Religious Freedom Laws
Senators discuss problems with State Patrol; judge's resignation questioned