"I Want the Same Equality:" Protesters Speak Out During Mostly Peaceful Night in Omaha

Protestors took to the streets in Omaha on Monday evening, even after some black community leaders encouraged them to stay home.

Those leaders had urged calm and planning after a Monday afternoon announcement from Douglas County Attorney Don Kleine that there would be no charges filed in the shooting death of 22-year-old James Scurlock.

On Monday, Kleine said his office was open to other evidence, but had concluded for now Gardner acted in self-defense.

Still, around 5 p.m., a handful of people gathered at 30th and Ames in Omaha to protest that decision.

"We need the same justice that everyone else has," said Freddy L. Williams, who moved to Omaha during the Rosa Parks movement. "I’m not out here to erupt with anything or interfere with the liberties we already possess. I want the same equality.

"I still believe in America," Williams went on to say. "I still believe that the Founding Fathers, what they founded this nation upon was the principles of life, liberty and happiness. So that’s all I want. You know I don’t have too much more time to be here, so I would like to say justice, equality for all humanity. That’s the only thing I want."

Next to him, Hansel Morrow said he was tired. 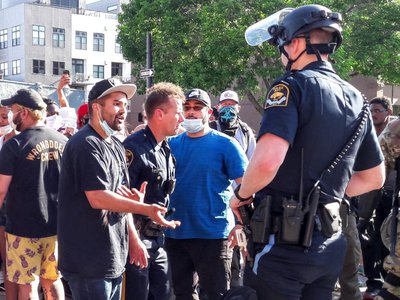 A man talks with a law enforcement officer during a protest Monday night in downtown Omaha. (Photo by Bill Anderson, NET)

Morrow said he can see both sides because of his life experience. Growing up, he lived with rich white foster parents before returning to live with his dad in North Omaha.

"Not all white people are bad. Not all cops are bad," he said. "But right now it’s the cops who are making us suffer."

Most cars passing by honked and yelled their support. But while I spoke with the protestors at this intersection, a car with two white men drove by and yelled an expletive at them.

Half an hour later, at 24th and Pinkney, Amanda Ivy, her children and niece stood on the sidewalk in front of their home with signs.

"I used to shield them from watching the news, but now it’s all we watch. It sucks," Ivy said. "You have to talk to your kids about this kind of stuff and how to interact with law enforcement and how to carry themself, things you shouldn’t have to talk about."

She said the reaction had been good with traffic passing by, and the children had made their own signs.

Downtown people gathered too. Businesses were closed, windows boarded up. The atmosphere was mostly peaceful, though sometimes emotions ran high. When they did, a group of civilian peacekeepers often intervened.

Crowds marched around the block of 13th and Howard.

Some protestors argued with officers, or appealed to them to understand. One woman holding a toddler on one hip addressed the police saying they were "...protected from the criminal acts that you do. Shame!"

One young man, Dezmend, who works in the area, moved from block to block, trying to engage with each officer and shake hands. Tears fell as he spoke to the police. He said it was simple.

"All that we need to see is that we’re a community and they’re with us," he said.

Just before 8 p.m., many of the officers knelt, to the crowd’s applause, though one woman encouraged those police kneeling to encourage the remaining standing to do the same.

Phones buzzed as curfew was announced at 8 p.m. Around that time, an individual threw a water bottle, which upset the crowd. Peacekeepers encouraged people to leave -- saying you can’t protest if you’re in jail.

Some protestors prepared to stay put on goggles, took out jugs of milk and became quiet. Military vehicles moved into position.

By 8:20 p.m., police were closing in to make arrests. A group tried to escape down an alley, but were turned back. Chemical agents were employed. I was among those detained, cuffed with plastic restraints and walked to a hot police van.

Later, after my employer intervened on my behalf to confirm I was a member of the media and allowed to be on the scene, I was let go.

The black people in the van, who told me they’d just been trying to make it back to their car, stayed put.

Editor's note: This story has been updated to correct the spelling of Dezmend's name.