Huskers Not Playing This Year, but There Will Be College Football in Nebraska

The University of Nebraska Cornhuskers football team, along with the rest of the Big Ten, will not be playing this fall because of the coronavirus. But some lower level schools that will be on the gridiron in Nebraska and the steps they are taking to keep student athletes safe.

There won’t be the sounds of game day in Lincoln this fall and you can forget about the smell of Valentino’s pizza and Runzas in the stands. Even bigger than that, fans won’t see their beloved Huskers play in Memorial Stadium.

But that doesn’t mean college football won’t be played this year. Because it’s on. At least on some college campuses, like Doane University in Crete, a school that competes at the NAIA level.

"We feel like we're in an area and a part of the country right now in late August where this is doable and this is manageable," Franzen said. 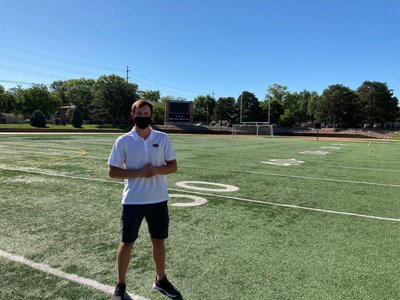 Braly Keller poses for a photo on the football field at Nebraska Welseyan University in Lincoln. (Photo by Brandon McDermott)

Franzen says he expects things won’t be as smooth as he would hope.

"This is doable and we don't expect that it's going to be just a smooth normal sail from beginning to end like we've had in the past. We do expect there will be some hiccups," Franzen said.

He says in the end, he thinks this is the right decision.

"There'll be some kids in quarantine and we'll have students that that do test COVID positive and some of those students will be fall athletes, it's worth the benefits, I guess, outweigh what some of the risks are and doing this now," Franzen said.

Last month, Division III Nebraska Wesleyan and Division II University of Nebraska at Kearney’s conference announced all fall sports were pushed back until at least January 1st. The same happened with D-II’s Wayne State. There is word that Chadron State might play some games this fall, too, maybe by October. Doane head coach Chris Bessler is excited to start his third season next weekend.

"I think it's a great deal for our kids," Bessler said. "We're trying to do everything we can, you know, keep it going and do things the right way."

Bessler says he isn’t the only one who’s excited. His players are too.

"I know they're happy," Bessler said. "I've heard that multiple times that they're just relieved that hey, we get a chance to get back out there and have a season."

BJ Pomeroy in the athletic director at Hastings College, which starts the season next weekend against Dakota Wesleyan University. He says the National Athletic Intercollegiate Association is different than the NCAA and the pandemic shows that.

"I think the NAIA is little more locally driven, where conferences are permitted a little more autonomy," Pomeroy said. "And I think that's giving us the benefit of different areas of the country being in different situations."

The Great Plains Athletic Conference (GPAC) is making masks mandatory for fans. Hastings will space fans out in the stands. They are doing what they can for fans who can’t attend in person by streaming the games. Pomeroy says the GPAC – where Doane and Hastings both compete – have had very good leadership during the pandemic.

"Trying to find a way to make things happen rather than to try to find reasons not for things to happen," Pomeroy said. 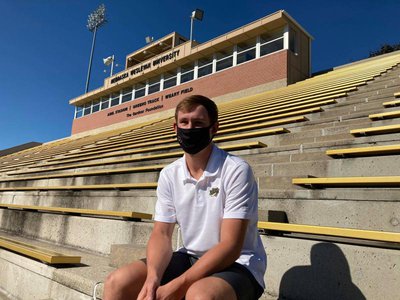 Braly Keller poses for a photo on campus at NWU. (Photo by Brandon McDermott)

Athletic Directors and university presidents aren’t the only ones with a voice in the process. Student-athletes also have a say in the matter. Braly Keller is the chair of NCAA D-III National Student Athlete Advisory Committee (SAAC). It’s group of student athletes who meet with the NCAA leadership team to discuss rules changes and this past few months, the coronavirus.

Keller graduated from Nebraska Wesleyan in May and played football for the Prairie Wolves. I was scheduled to meet with Keller at football practice at Wesleyan, but the day before our interview, the season was cancelled. Instead, we talked on an empty, quiet football field. Keller says there is a disconnect between how decisions are made by the NCAA and how they are perceived.

"We're raised in a culture where we want the quick soundbite," Keller said. "We want the headline but we don't want the article, (so) it can seem contradictory to what they saw earlier on Twitter."

He says the sports media nationally has done a bad job of telling the whole truth about how the NCAA functions.

"Voicing that it may feel redundant at times and I think it is very clear but we also need to understand the administrator, coaches and presidents, they're in those roles because they love college sports just as much as we do," Keller said.

He says there are a lot of misconceptions about the student athlete voice being heard when the NCAA makes decisions.

"There is progress to be made in terms of the student athlete voice, but I do want to say that student athletes aren’t (going) unheard during this time," Keller said.

Keller has been involved in SAAC for more than two years, served as chair since January of this year. He’s been in long meeting where tough decision are made.

"There really is student athlete voice in this and speaking in my roll – there’ve been many times yeah where I speak up and say hey, as a student athlete, the end of the day we just we want to play," Keller said.

On the deserted field, Keller remarked how quiet it is, when you’d usually be hearing the sounds of pads hitting, coach’s whistles and players cheering. The sounds of the game will still be heard throughout the state this fall, but not in some of the places you’ve come to expect it.