The Nebraska football team has spent weeks on the practice field and in the weight room preparing for its opponents this season. There’s one other place they’ve been that could give them an edge – the cafeteria. With Scott Frost now at the helm, there's a new approach to nutrition for the football program and it's got its roots in the past.

Dave Ellis knows Nebraska football. He was vital in the success of the Cornhuskers in the 1990s after running the nutrition program from 1994 to 2001. Over the past 17 years, he’s worked as a nutrition consultant to teams in four major professional sports: baseball, football, hockey and basketball.

"Since that time a lot of people have caught up," Ellis said. "In fact that’s what I've been doing the last 17 years, was flying around helping people get caught up as a consultant." 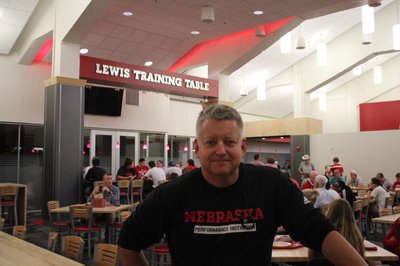 In July, the University of Nebraska athletic department hired Ellis as director of performance nutrition. He will not only focus on football, but all 24 sports at Nebraska which includes more than 600 athletes. Ellis says there are some things he’s picked up over the years that will help Nebraska get back ahead of the competition.

"There’s really no school for this," Ellis said. "Sports is just too dynamic a thing you either work in it and learn from it – or you don’t."

An example of something different Ellis and his team are doing is incorporating beets into the food athletes eat.

"(You’ll see beets) with great frequency on our training table, because beets have a naturally high nitrate content to them and that helps potentiate something called nitric oxide," Ellis said.

Nitric oxide causes capillary beds and muscle to dilate. This lets athletes do more work without getting tired and allows their bodies to recover faster after games. 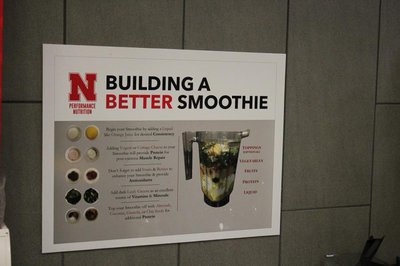 A poster on the wall helps athletes build the best smoothie, based on what they are looking to maximize. (Photo by Brandon McDermott, NET News)

"So we're trying to – from a variety of foodstuffs – do innovative things," Ellis said. "That's just one example of where we're evolving this high-performance fueling setting for the better."

Football player Will Honas transferred to Nebraska in January from Butler Community College in Kansas. He says he has never seen anything like what Nebraska offers at the Lewis Training Table at Memorial Stadium. A myriad of choices for salads, sandwiches, several pastas and meat entrees along with fresh fruit and nuts for smoothies. Honas has already seen results from the nutrition program.

"I definitely notice improvements," Honas said. "We do like DEXA test for body fat and I dropped some fat and put on muscle. I really never influenced diet as much as I have since I got here and I think that's really helped me as a player and as an athlete."

Honas has only worked with Ellis for 28 days and in that time he says Ellis has helped him understand the “why” along with the “what” and “when” about the food he eats.

"Coach Ellis does a great job," Honas said. "He breaks it down for us -- we know to get our vegetables, fruits, carbs proteins every day – for every meal – and it’s just really organized it just makes it really easy for us."

Ellis says when it makes sense for the athletes, the plan comes to fruition. 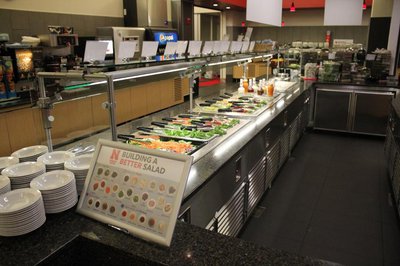 The salad bar at the Lewis Training Table includes several different types of greens to choose from. (Photo by Brandon McDermott, NET News)

"When they connect the dots it's a big moment," Ellis said. "What we do is speed up that dot connecting process."

By pointing out the consequences of unhealthy eating, Ellis says you can help athletes. Eating unhealthy foods can cause athletes to become vulnerable to fatigue in practice or during competition and can slow their rate of recovery between workouts and competitions.

"Then they feel it," Ellis said. "That's how you make believers out of them – sooner rather than later – and you start the behavior change process from a slow crawl to a rapid walk or sprint."

Ellis says that “rapid walk and sprint” is what the football program needs to get the most out of every player. He’s confident the foundation he has laid will help Nebraska for years to come.

"Football is back to where it was (with nutrition) when I left 17 years ago, just in the last 28 days," Ellis said. "We've got things on par for them – we will take every sport forward in a very rapid fashion."

Ellis says improving the nutrition programs for all 24 sports at Nebraska will be easier with the help of his team of three full-time dieticians. He says getting the full impact of proper nutrition isn’t just about game day, but every day and every meal.