The Farm Bill touches everything from crops to consumers and spends nearly a trillion dollars over the next ten years. It became law in February, but questions remain: who was trying to influence how lawmakers shaped food and fuel policy?

When U.S. Sen. Debbie Stabenow announced passage of the Farm Bill in February, she echoed a refrain from a car commercial.

“This is not your father’s Farm Bill,” she said.

While Stabenow, the Michigan Democrat who leads the Senate Agriculture Committee, was referring to what proponents heralded as “reform” of some programs, her remarks were accurate on another score. The massive Farm Bill, which will spend $956 billion and set U.S. food policy for the next decade, is no longer the purview solely of agricultural interests. 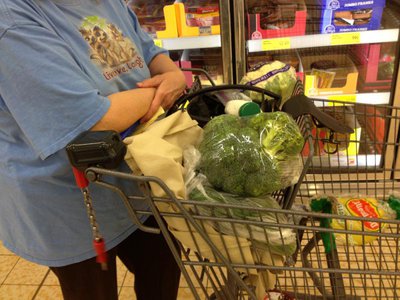 Ramona, a 71-year-old retired teacher who gets $25 a month in food stamps, stocks up on fresh vegetables and fruit at an Aldi Supermarket in Kansas City. (Photo by Peggy Lowe, Harvest Public Media)

The Farm Bill has evolved from a spotlight on commodities to a focus on consumers, a joint investigation by

found. At least 600 companies spent roughly a half billion dollars in total lobbying during the two years the Farm Bill was moving on Capitol Hill, with big spenders ranging from Fortune 500 leaders in banking, trade, transportation and energy to non-profits worried about food stamps and global hunger.

To compile this report, we pulled data from Congressional lobby disclosure forms from 2012, when work on the bill began, through the first quarter of 2014, when the bill was passed and signed by President Obama. While difficult to determine an exact amount expended on the Farm Bill, as these groups also lobby on other issues before Congress and disclosure forms are self-reported, the figures reflect the clout these groups carry in Washington and is an indication of the influence on how priorities are set.

“It used to be a little struggling band of farmers would talk to their congressmen and it was pretty much an in-house conversation,” said Bill O’Conner, a former staff director for the House Agriculture Committee and 25-year Capitol Hill veteran now working as a private lobbyist.

No longer. Farm Bill lobbying is a reflection of big business. The U.S. Chamber of Commerce, one of the largest overall spenders on Capitol Hill, spent $146.5 million during that two-year period and regularly lobbied on behalf of the Farm Bill. Energy companies Exxon and DuPont also spent in the tens of millions and promoted ethanol and biofuels.

The American Bankers Association, one of the groups that will benefit most from the bill thanks to a shift away from the safety-net policy of direct subsidies to crop insurance, reported spending $14 million on lobbying, including advocacy for crop insurance and other rural lending plans.

In the past, the dairy, corn, soybean and traditional agriculture groups were the major lobbyists on the once-every-five-years farm bills. Ag giant Monsanto, the world’s largest seed company, spent nearly $10 million lobbying, and the American Farm Bureau spent around $1 million.

First created to help struggling farmers during the Depression, the Farm Bill has since changed focus from production agriculture to consumption of food, said C. William Hoagland, a senior vice president at the Bipartisan Policy Center.

“The nature of the Farm Bill has always been one that has gradually grown away from the normal hogs, corn, cattle production side of the equation to more of a consumer-oriented one,” he said.

Food stamps were placed in the Farm Bill originally so rural lawmakers could get urban and suburban support for the bill. Now called the Supplemental Nutrition Assistance Program, or SNAP, the program eats up nearly 80 percent of the bill’s worth.

SNAP attracted top lobbying dollars, with politics making strange bedfellows of grocers, AARP, Coca-Cola, Kellogg, the American Sugar Alliance, the American Dental Association and the Jewish Federations of North America. The groups – those fighting against and advocating for the program -- dumped significant funding into the fight.

AARP, the powerful lobby for seniors, spent an estimated $10 million for all lobbying during the two-year period. The group was active in trying to rally support for food stamps.

AARP representatives said fighting senior hunger is one of the group’s top priorities as the typical senior citizen has an income of about $20,000. And, AARP was a leader among several anti-hunger advocates to oppose a move by House conservatives in September 2013 to severely cut benefits.

“Our work on the Farm Bill lobbying against those cuts to SNAP was a big, significant piece to that overall commitment to ending senior hunger,” said Jim Dau, an AARP spokesman.

The Farm Bill was one of the toughest battles yet in this era of legendary partisan bickering, putting it at a pace to become the sixth most heavily-lobbied bill of last year, according to the Center for Responsive Politics.

Set to be updated and passed by 2012, Congress failed to reach resolutions and the programs were granted two extensions. It was finally approved in early 2014 – after conservatives in the House went rogue in the fall of 2013 and failed at an attempt to separate food stamps from the bill. The bill carries promises to cut $16.5 billion in spending, including $14 billion to subsidy and commodity programs, $8 billion from food stamps and $4 billion in conservation programs.

But crop insurance was bumped up by $6 billion, thanks to a radical change in how farmers will be protected from losses, with a mostly universal agreement of dropping the direct payments of the past.

Before subsidies became a political pariah, in part because interests like the Environmental Working Group revealed that the subsidies were often given to the wealthy, the Farm Bill process was relatively standard each year.

Pat Westhoff, director of the Food and Agricultural Policy Research Institute at the University of Missouri, worked for the Senate Ag Committee in the mid-1990s. Bi-partisan agreement was not hard to come by back then, he said, and it was easy to track the interested parties.

“I literally had in my desk a list of the phone numbers of what I not so facetiously labeled ‘the usual suspects,’” he said, adding that the numbers included the Farm Bureau, Farmers Union and groups representing corn, soybeans, wheat, cotton and rice.

With the change to crop insurance as the safety net centerpiece, banks and insurance companies spent at least $52.6 million in lobbying this Farm Bill and other issues during the 2012-14 time period, according to the data. Wells Fargo & Co., the fourth-largest U.S. bank, spent approximately $11.3 million; the company’s Rural Community Insurance Services, the largest crop insurance provider in the country, will surely benefit.

“Crop insurance has a bright future and will remain a key component of farmer and rancher risk management portfolios,” Christy Seyfert, Wells Fargo’s government relations director wrote in a 2013 newsletter.

Just as it fought the direct subsidies of the past, the Environmental Working Group tried to limit the new crop insurance program in the current Farm Bill. The day Obama signed it last February, Craig Cox, EWG’s senior vice president of agriculture and natural resources, said the savings created by ending the direct-payment program was lost and “will be even worse for taxpayers and the environment.”

“The new law also locks in profits for crop insurance companies and their agents,” Cox said in a statement. “Meanwhile programs that feed hungry families and reward good stewardship of the land get shortchanged.”

Energy interests were also well-represented in the lines of lobbyists. In addition to Exxon and DuPont, NextEraEnergy, a $15 billion Florida company, spent heavily and lobbied often on the Farm Bill. NextEra, which claims to be North America’s largest owner and operator of wind and solar electric generation, reported promoting alternative fuels and biofuels, among other interests.

But there were those who fought ethanol production, including Nestle, the global conglomerate that makes candy, coffee and nutrition products. Nestle spent $7.8 million on lobbying, including Farm Bill issues such as SNAP, the dairy and sugar programs and “planting flexibility issues related to corn ethanol.”

Nestle has long been an opponent of ethanol. In 2011, the company’s chairman, Peter Brabeck-Letmathe, lashed out at Ag Secretary Tom Vilsack, calling the Obama administration’s promotion of ethanol “immoral.”

Given the two years delay, the competing interests and the partisan polarization on the current legislation, the future of farm legislation is difficult to predict.

Other trends like climate change, water problems, and greater competition of the international markets could play a role in future farm bills, said Hoagland, of the Bipartisan Policy Center. Crop insurance will also be watched to see if it maintains farmer income, he said.

But Hoagland believes that the subsidies for ethanol and other biofuels may be reduced.

“It was looked at as an opportunity to start up these companies, but those federal subsidies, I think, will start to dwindle going forward largely because of the fiscal situation we may be confronting,” he said.

The look of the lobby will also be watched as the urban and rural coalitions of the past have fallen apart, the Midwestern role in prioritizing the Farm Bill became muddled by regional differences and corporate interests continue to influence policy.

The different set of coalitions of the past that ensured that the Farm Bill would pass every five years can’t be relied on anymore, Westhoff said.

“My own perception is that things have become so polarized across all of American politics right now that just putting together what used to be relatively routine compromises is more challenging than it ever was before,” he said.

Former House Ag Committee staffer O’Conner agreed, and wonders if the food stamp and nutrition programs will be able to continue to be married to get a bill through Congress. Out of a nearly trillion dollar bill, the farm concerns held about $200 billion, he said.

“That’s a very big anchor to drag across the floor,” he said.

Congress, advocates and all interests will need to think about that challenge during the next five years.

This story was produced in conjunction with the Midwest Center for Investigative Reporting.