How Young Entrepreneurs Are "Dishing Out Girl Power" in Bassett

A group of young entrepreneurs from north-central Nebraska is dishing out dessert and girl power. NET Television producer Mike Tobias tells the story of On the Go Gelato in an NET News Signature Story from the new season of NET's "What If…” series on innovation and creativity in Nebraska, which airs tonight on NET Television.

"What If..." is the award-winning NET Television series on innovation and creativity in Nebraska. Learn more, and watch stories and shows HERE. 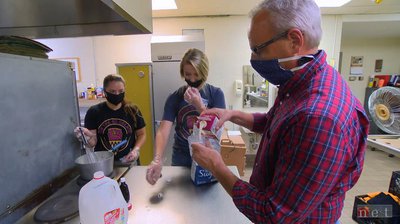 "What If..." host Mike Tobias helps make gelato. (Christian Champoux/NET Television image) Watch the "What If..." segment about On the Go Gelato HERE. 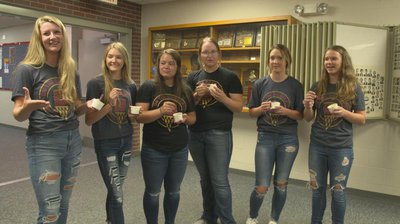 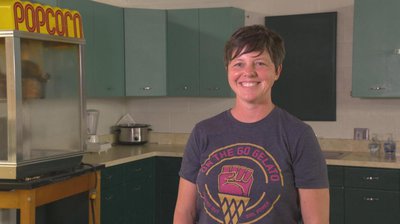 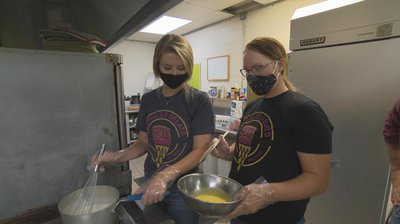 It started when teacher Ann Dvorak got Rock County High School in Bassett into a project supported by FFA and UNL’s Engler Agribusiness Entrepreneurship Program. Four of her students got involved. But they needed a business idea to pitch.

“We went from a tree cutting business to a food truck and rustic restoration,” Rock County senior Karley Anderson said.

The day before the big pitch a couple of team members were out of town. On the way back they stopped at a gelato shop. “We fell in love with it,” Rock County senior Jaya Nelson said.

On the Go Gelato was born.

Jillian Buell and the three other seniors who started the school-based business are sophomores. Two younger students, Brooklyn Buell and Mariah Ost, joined the team soon after.

“In the beginning, I think it was just, ‘Oh yeah, we're going to learn about entrepreneurship and start a business,’” Dvorak said. “And then it became ingrained in them.”

Two thousand dollars from that quick pitch program and other funding helped buy equipment and get the business going.

“In our first year, we actually made money. We've continued to do so,” Nelson said.

Students do everything. Manufacturing in the school kitchen, sales and marketing. Selling to students and teachers at school once a week, at events like county fairs, even shipping online orders.

“In the town of Bassett we don't have anywhere to get good quality ice cream or gelato,” Nelson said. “We can get prepackaged ice cream from the gas station, but we can't find that anywhere else. So in our mind, it was solving a problem in our community with something that we were really excited about.”

They’ve had plenty of success. Like pitching for the entrepreneurial-themed reality show “Shark Tank.” “Having that opportunity to be able to pitch to the producers and then move on to the next round and just all the cool people that I got to meet was a super cool opportunity,” remembered Jillian Buell.

And they’ve hit a few bumps. Gelato melted when a freezer got left open. Bad weather killed sales at an event. Trouble getting a food inspector to review their business. Even classmates doubting what they were doing.

“The kids in our school, when we were first starting it, they were like, ‘Oh, this isn't going to turn out. No one's going to want your ice cream,’” Ost said.

“Mostly the boys in our class, I think we’re just jealous of us being successful and starting something cool,” Olson added. “They really hated on our business.”

Turns out, gelato can change a lot of opinions. During a break between classes, students flocked to a room to buy small two dollar cups of cinnamon and salted carmel. Sold by young ladies wearing matching t-shirts adorned with the company motto, “dishing out girl power.”

“’Dishing out girl power’ to me means showing other girls that they can do something different too,” Jillian Buell said. “I hope that girls can look at us and see that they can follow their dreams and they can do whatever they want.”

“Yes, we started a business, but we're not the only ones that can do it,” Anderson said.

“You can follow your dreams basically is what we want to show other young women,” Nelson added.

“I would say that one thing that connects all of them is they have a lot of grit and they don't give up easily,” Dvorak said.

Watch the "What If..." story about On the Go Gelato