How to Talk About Climate Change in Rural America? Don’t Say Those Words

Rural communities are some of the most politically disenfranchised when it comes to climate policy, and last year’s National Climate Change Report showed they’re also among the most at risk when it comes to the effect of climate change. This could mean stronger storms, more intense droughts and earlier freezes.

While President Donald Trump has rejected the scientific evidence of climate change, nearly half of his voters — many in Midwestern states — believe in global warming, and most support funding renewable energy. This bucks stereotypes about a rural voting bloc that doesn’t care about the environment. And though rural residents may not use the words “climate change,” they can see it happening in their own backyards and farm fields.

"We talk about it, but no, we don't we don't use the term climate change," said Paula Dennison, the assistant city manager of Stillwater, Oklahoma.

What’s more, the program at Yale has found that 6 in 10 Trump voters are in favor of taxing the pollution that causes climate change. The program found the majority of people cited having directly felt the impact of climate change themselves as the reason behind changing their mind about the issue.

Dennison has seen the environment change since she moved to Oklahoma in 2004.

The challenge isn’t just bridging cultural or political divides, or even one side admitting that they were wrong, but getting a person to doubt the people they trust the most.

When Janine Parry was a kid, her mother taught her that rubbing vitamin E into wounds would reduce scarring. Years later, she told her husband about the beatific properties of this vitamin.

“And he said, 'Really? I've never read that,'” Parry said, “and I just looked at him like, 'Well, you're an idiot. Everybody knows that.’” 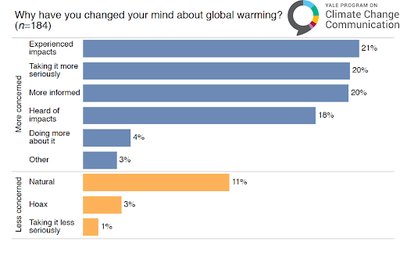 Her husband challenged her to prove it. She couldn't.

"I, of course, looked and I immediately found three or four controlled, well-designed studies that said not only does it not reduce scarring," Parry said, laughing, "But in some cases, in some circumstances, it might make the scarring worse."

Parry, a political science professor at the University of Arkansas, studies "motivated reasoning.”

That’s how culture and values influence what we believe. She and a few other researchers have found that people don’t actually use facts or reason to change our minds. Emotion is a far bigger factor for changing someone’s mind.

When it comes to climate change, Parry said it’s simple: "When your personal experience, and particularly your livelihood, is tied up in a particular pattern of the world, it’s really hard right to hear anybody say anything that appears to attack that or discredit it."

Personal experiences are changing, however. Yale found that the percentage of Americans who are “alarmed” has doubled in the past five years. This might be, Parry said, because rural people are experiencing climate change themselves. 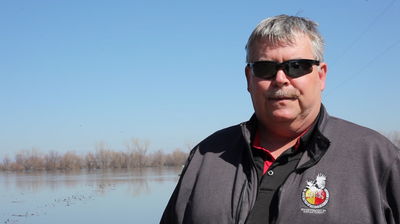 Mark Junker lives in Falls City, Nebraska, not far from the Nebraska state line. It's also 20-something miles from White Cloud, Kansas, which is near the Missouri River. This spring, it flooded so much that neighbors called it a “100-year flood.”

“Those things have all pretty much gone by the wayside anymore,” he said. “Just because they're happening so frequently. It's like you're having 100-year-flood happening every five or six years.”

Junker works for the environmental department of the Sac and Fox Nation of Missouri in Kansas and Nebraska. He also writes a region-specific climate summary, pulling public data into readable charts and translating it into easily understandable language. His most recent summary, published in March, featured a section on flooding; people from more than a dozen homes had been evacuated as of March 14. 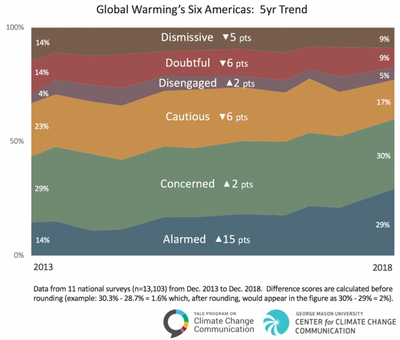 He drives around in a white, mud-splattered diesel pick-up and delivers these reports to tribal facilities in Kansas, Nebraska and Iowa in the hopes that someone might pick it up and learn a few things.

Hiawatha, Kansas, which is part of the region, is not a wealthy area, and Junker said that might have something to do with the disengagement. If someone is concerned about climate change, they might see it as a problem for next year. Right now, these residents are more worried about whether next month’s check will cover the whole utility bill.

“I feel like a lot of people around here care about climate change,” Junker said in a hopeful tone. “The region is so dependent on farming, that regardless of your political view on the matter, there's things that are really noticeable going on.”

Dennison, in Oklahoma, sees a huge difference in how receptive people are to climate change when she talks about solutions. That’s because, she said, when there’s a concrete idea on the table, doors are more likely to remain open.

Stillwater is lucky enough to have resources to capitalize on, especially those at Oklahoma State University. It offers resources like drones during flood events for the town to use. Even just visual data of flood patterns can help Stillwater prepare for the next natural disaster — the types that intensify as weather patterns do.

"What can we have our government, or our churches, or our educational system, do to help us look toward the future?” Dennison said. “We can't stop climate change, but we can be better prepared for it when it comes."

Meanwhile, Parry with the University of Arkansas won a grant to study how rural people perceive climate change risks. She said she’s hoping to understand how motivated reasoning works within rural communities, and how they make decisions for an uncertain future.

Presidential Order Halts Work on Keystone XL Pipeline in Nebraska.
Fortenberry, Bolz Agree Climate Change Needs to Be Addressed, but Not How
How to Make Flyover Country More Welcoming to Migrating Birds