How the Backpage shutdown impacted the commercial sex industry and trafficking

Earlier this year a combination of federal law enforcement and legislation shut down web sites believed to be facilitating sex trafficking in the United States. Mike Tobias talks with two Creighton researchers about the impact of these actions on sex trafficking and the commercial sex industry. Please note this story deals with subject matter of an adult nature.

Crysta Price and Terry Clark have spent the last few years looking at a very dark side of the internet. They run Creighton University’s Human Trafficking Initiative, which uses data science to crunch information scraped from web sites that help sell people. Their work helps law enforcement, social service agencies and lawmakers understand the commercial sex industry; identify who’s involved and how often it’s sex trafficking. They believe 900 individuals are sold for sex every month in Nebraska, and 70 percent have at least one indicator of being trafficked.

Learn more about sex trafficking in Nebraska and the stories of survivors in NET's "Sold for Sex" project, which includes two television documentaries. 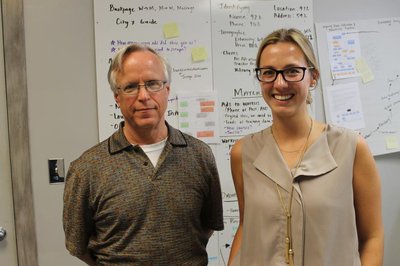 Terry Clark and Crysta Price from Creighton University's Human Trafficking Initiative (Photo by Mike Tobias, NET News). Watch Clark and Price give a detailed presentation (in late 2016) on the commercial sex industry nationally, and in Nebraska, in this video from NET's "Sold for Sex" project. 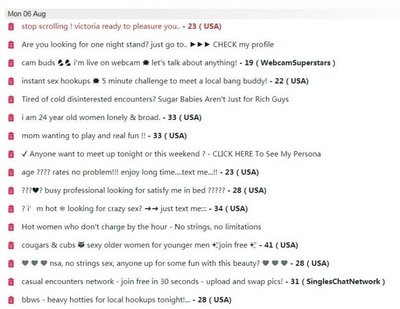 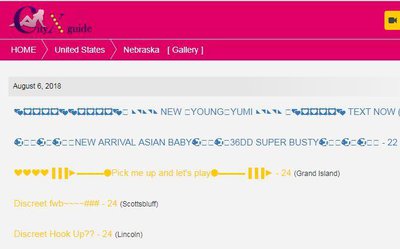 Bedpage (above) and CityX Guide (below) are two of the non-U.S. based web sites filling the commericial sex advertising void left with the shutdown of Backpage and other U.S. based sites. 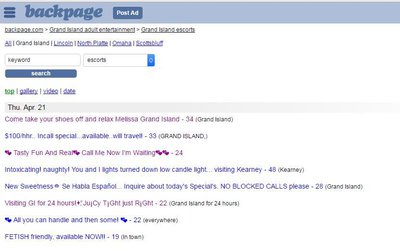 This is what listings on Backpage's adult section looked like on a typical day.

What Others Are Saying About Impact of the Backpage Shutdown

Glen Parks, Nebraska assistant attorney general and Human Trafficking Task Force coordinator: "I don't think it'll be a single website, but I think they'll be some places. There's a market. There's a demand and a supply and so they're going to find some place to go. I'm in communication with task forces in other states and the Creighton researchers, of course, are looking into this. And we're trying things. We're still doing operations. So at the moment, honestly, we're not exactly sure where the market is going. There's a bit of a transition. A positive aspect to this is that I think there's probably genuinely less commercial sex transactions happening for short-term. The flip side of that is that it's also hard for law enforcement to find out what's going on and when they do land, we'll need to be there."

Meghan Malik, Women’s Fund of Omaha Trafficking Project Manager: "I think that with the change in Backpage, where we are still looking at how do we best tackle this from an online perspective, I think we also still need to send a clear signal to sex buyers that this will not be accepted. We have to be increasing the risk for sex buyers, and we also have to be prosecuting them. Backpage was knowingly selling minors, and that's not acceptable, and they should be held accountable, but we also know that the way the internet is, it is so easy to sell a human being for sex. That makes investigating cases complicated."

Their work had focused on one online advertising web site. Backpage. Here on separate pages for Omaha, Lincoln, Grand Island, North Platte and Scottsbluff you would daily find dozens of ads with provocative pictures, prices and services, promising things like “a kinky side to satisfy any appetite.” Backpage was considered the hub of the commercial sex industry.

That quickly changed in April. First Backpage was seized and shut down by federal authorities. Trafficking-related charges were filed against the company and its leadership. A few days later new laws cracking down on entities supporting trafficking went into effect, essentially forcing several other U.S.-based websites out of business.

So what do Price and Clark, two researchers with a very deep understanding of how this industry works, see now?

“I'm absolutely not convinced that a website being shut down suddenly will make a trafficker say, ‘Oh OK, you guys are free to go,’ or, ‘OK, I'm going to stop trying to exploit you simply because this one website is shut down,’” Price said. “They’re going to find another way, and we’re always going to be behind.”

“I think it's clear that the laws created chaos in this industry, and that chaos is still shaking out,” Clark said. “I don't think anybody argued it was going to end trafficking or prostitution. It certainly hasn't. The question we're not sure of is, OK, what is really the effect? Has it increased or decreased trafficking as a percent of the entire industry? I think those are questions that are good questions to ask, and that I don't know if we have answers to those yet.”

Shaking out in the form of websites based outside the United States. In countries like Austria and India. With names like BedPage, CityX Guide and Adult Search. They look a lot like Backpage, but the ads are even more explicit. They’re selling local sex to U.S. customers, away from the reach of U.S. authorities.

“It was this weird sort of shock and awe situation, almost like a panic where the new sites that then came up are sites that no one was ever looking at or watching,” Price said. “Their servers are not in the United States. That's how they're able to kind of get around it. They're all kind of marketing to try to get at the Backpage market, right? To try and capture that.

“On the tech end, really weird things, because a lot of these sites didn't expect such quick growth. There's a lot of up and down with their servers,” Price added.

“It's almost like a wave,” Clark said. “The wave is over here at this point, and then it's over here. You can see it's trying to shake out.”

“I think that we won't get to the point of a company like Backpage having the market share it had, but I think that we will get pretty close,” Price said. “There's certainly the market incentive for it. The market dynamics everywhere would move in that direction, right? Backpage made a ton of money. If you're an entrepreneur in any of these countries, throw up the website. You can make a lot of money. At the same time, there's the incentive for johns to be able to easily find the providers and vice versa.”

Price and Clark said this chaos has unfortunately led to a commercial sex buyer’s market.

“It put the power in the hands of the johns, the sex buyers who are a little bit more in control now,” Price said. “You've got the individuals who are either trafficked or forced by circumstance to be in this industry who still need to bring home the same quota, or their rent really still stayed the same. It becomes kind of a scrambling, trying to figure out how to bring home the same amount of money and how to reach the johns. The johns, if you think about it, they don’t need to scramble to survive. They still want to see the girls, but it doesn’t come down to survival for them.

“Now we're seeing lower prices, a lot of specials and stuff that are happening,” Price added.

“Unsafe services being offered or provided that might not have been in the past,” Clark said. “Sex without a condom would be one that would be obvious, but that's not alone. Opening up the menu to services they prefer not to engage in in order to meet the quota with now lower prices, because the johns know that it's more difficult for them to find their customers. They're in a positioning power, a superior bargaining position than they were prior.”

The shutdown of Backpage and similar websites has also created challenges for those fighting against trafficking. In the past, law enforcement could mainly focus on easily accessible Backpage posts during investigations.

“They have to crawl across minimally five or six websites now, and then ask themselves, ‘Is this the same person that I'm seeing in these ads?’” Clark said.

“Now you have to subpoena all these different places, the majority of which aren't going to respond to a subpoena, because they're not a U.S. company,” Price added. “It makes the problem a lot more difficult, a lot more decentralized. This was already a hidden population and a difficult investigation to do anyway.”

It’s also forced Price and Clark to basically start over with a new model for getting and analyzing data. Finding and following new, more secure sites, which are harder to “crawl” for information. It’s something they anticipated, but said it may still take 18 months to get back to where they were before. But they also see it as an opportunity to emerge with a fuller picture of the commercial sex industry.

“The shutdown created a ton of problems that we’ve been going through, but created this new research design for us that's going to be able to capture more segments of the industry,” Price said. “There are a lot of research questions we can start to ask, like do we see trafficking concentrated more in that sort of mid-to-low tier of the industry? Do we see it in that higher end? Is it happening more in these sort of escort agencies in large cities that are international? We could start to ask those questions the more that we have all of that data.”

“We've actually been conceptualizing what we'd do in a post-Backpage era for quite some time, but now we're actually doing it, going beyond conceptualizing but also putting the pieces together. That work is going on now,” Clark said.

“There are other sources of information that will allow us to get at non-online commercial sex advertising as well. We're going to continue to work that and try to bring those in. There are communities that we know that we are underestimating the amount of trafficking in those communities, quite to a substantial degree,” Clark added, mentioning immigrant communities as one that they believe to be underestimated.

So yes, the shutdown of Backpage and other websites didn’t end sex trafficking, and it did create challenges for those trying to end it. But Price says it’s important to remember this.

“There's a difficulty in sort of bringing up some of the concerns with the effect of this law, but then also trying to not belittle the experiences of people who have been completely exploited on Backpage, because we have to remember that it was those voices who started this whole anti-Backpage effort,” Price said. “That’s extremely valid.”