The devastating Camp Fire in the national forests in California has brought new attention to climate change and the management of national forests. Midwest forest managers say they have been able to keep fires under control, and will continue to do so even as the region gets warmer.

A stand of trees in the Mark Twain National Forest in Missouri looks a little more sparse than what is often depicted in a forest.

Diaries from the first European surveyors describe “a sporadic overtstory of timber and the understory was a grass and brush, and tree spacing was wide enough to where they could actually drive wagons through the trees,” he said.

It’s how the Mark Twain and other national forests in the Midwest, like the Shawnee in Illinois and Hoosier in Indiana, keep fires at bay.

That type of density, as well as a diverse mix of trees, will help the forests withstand climate change, which in the Midwest will look like warmer weather, shorter winters and fewer hard freezes of the soil. That’s top of mind for foresters, as the devastating Camp Fire in California has brought more attention to forest management and the role climate change is playing in the severity and frequency of major wildfires.

Mike Kelly has fought fires all over the country, but is based at Mark Twain. He said the spacing helps because it’s easier to combat a fire you can see. 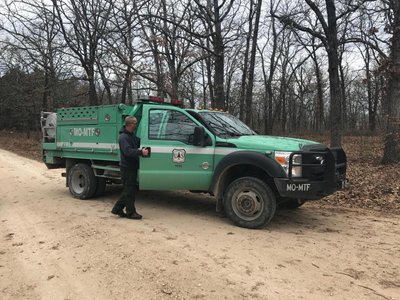 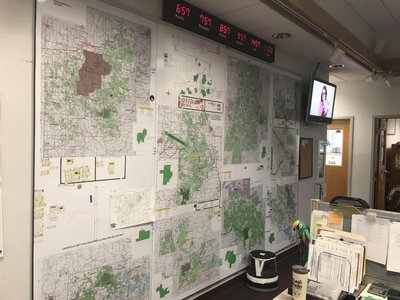 Small fire engines like this one can put out most fires in the Mark Twain National Forest because they are visible from a distance. But sometimes, a leaf blower can do the trick. (Photo by Jonathan Ahl, Harvest Public Media)

“I can drive around, and see small fires through the trees from the road, sometimes up to a mile away,” Kelly said, adding that he can use common yard tools to make sure it doesn’t spread. “I can come here with my leaf blower or other hand tools, things like that.”

And if the fire is too big for his trusty leaf blower, that wagon-size distance between the trees also accommodates more modern equipment — like a bulldozer.

Tree diversity is a key part of forest management as well, according to Mark Twain forestry technician Trevor Ozier. A tree stand with all the same species will likely die at the same time.

“Then they aren’t trees, they are firewood,” said Ozier, whose job is to diversify the homogenous groups of trees settlers planted.

“You get a mix of different species -- white oak, post oak, black oak, they all have different life cycles and different age spans,” he said.

Once a tree stand has a good mix of trees that are spread out, Ozier said, the key is to do controlled burns every three to seven years to clean out brush, as well as selectively cutting down older trees.

That’s kind of forest management that is making forests healthy now and will continue in the future, according to Chris Swanson, director the USDA’s Northern Forest Climate Hub.

Some of the trees in the mix at Mark Twain, like shortleaf pine and jack pine may not do as well when the Midwest warms up.

“As the climate gets warmer, and winters get warmer and shorter, and that late-season drying happens, and it gets hotter in the late season,” Swanson said, “these cold-weather species will be less competitive.”

Midwest forests will not face the same challenges as western forests — it won’t get that dry and hot, Swanson said. But that’s not keeping Midwestern forestry experts from taking away lessons from the West.

Kelly said he is hesitant to suggest that what works in the Midwest would work in Colorado or California.

“It’s comparing apples and oranges. When someone talks about a western state, and its forests, and how it should be managed,” Kelly said. “I don’t think our society has been active in the area long enough to actually make a great determination on that.”

Kelly said he also has confidence in how Midwestern forests are managed, and believes it can continue as climate change alters the composition of the forests and the weather.

The USDA may have more tools to manage forests in the coming years. The final version of the farm bill allows counties, tribal governments, nonprofits and private landowners groups to assist with managing forests.

Kansas Republican Sen. Pat Roberts said forestry is a key part of the bill, noting that forest management is a “controversial issue.” But the Senate Agriculture Committee chairman told Harvest Public Media that the goal was to get “as much of the forest management proposals or … reform that we could,” adding that he thought “we could have done more.”