Three teenagers from small town Nebraska. Two went to war and died 75-years-ago today. The other gave new life to their story, and in the end helped bring them back together. ​Here’s how and why this happened. (Note: this story originally aired in December 2015)

Look at an old black and white photo of Henry and Louie Pieper. They may be dressed in U.S. Navy uniforms and headed to war, but it’s hard to see anything other than two very young looking twin brothers. The boys from the small town of Creston were just 17 when they enlisted to fight in World War II. 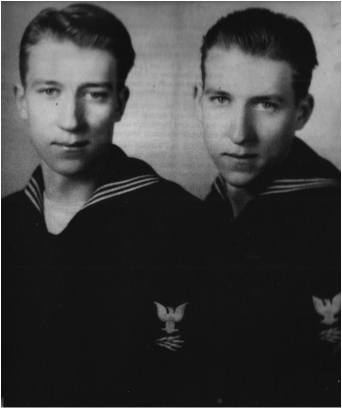 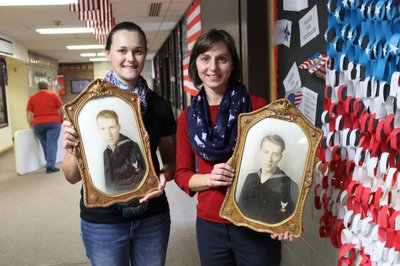 Vanessa Taylor (L) and Nichole Flynn (R) hold photos of Henry and Louie Pieper given to them by Mary Ann Lawrence, younger sister of the Pieper twins (photo by Mike Tobias, NET News)

“Small town guys that went off to fight, to help their country. Yeah I think definitely, lots of people from around here,” said the 16-year-old from Ainsworth, 170 miles to the west of Creston.

The Ainsworth High School junior also knows a lot about Henry and Louie, formally known as Julius Heinrich Otto Pieper and Ludwig Julius Wilhelm Peiper. Taylor talks about how these sons of German immigrants graduated from their high school in Creston, between Columbus and Norfolk, worked for the railroad in Lincoln for a few months, then joined the Navy in 1943 because that’s the branch their older brother chose. She knows Navy policy initially split up the two radiomen, but they were put on the same ship after a written request to their commanding officer. And she knows about their transport ship, LST 523, which 13 days after D-Day was ferrying supplies to Normandy beach, and taking back casualties and prisoners.

“They made two round trips from England to the beaches of Normandy, and then on their third trip they hit a mine and the ship sunk. So they went down together,” Taylor said.

Seventy years separate Taylor from the Pieper twins. A history project brought them together.

“She has such tenacity with the National History Day program,” said Nichole Flynn, Ainsworth teacher and Taylor’s coach with the school’s History Day team.

Taylor had won state championships and placed nationally in the academic competition, but wanted more. So Taylor and Flynn applied and were among 15 student-teacher pairs selected for a special National History Day program called the Normandy Sacrifice for Freedom: Albert H. Small Student and Teacher Institute. They picked what the institute refers to as “silent heroes” who died as part of the Normandy invasion; the Pieper twins for Taylor and Flynn.

“We spent the spring semester reading books and watching videos and having online discussions with the other teacher-student teams who had been selected to participate,” Flynn said.

They also visited their home town and talked by phone with their younger sister Mary Ann Lawrence, who now lives in California. All in preparation for a summer trip to France.

There standing in Normandy American Cemetery next to a simple white cross where Louie Pieper is buried, Taylor delivered a eulogy she wrote for the twins.

“When I started this project, the names Ludwig and Julius Pieper were only just that. Names to me. But now I am so thankful that they have become heroes in my eyes,” Taylor said at the beginning of her eulogy.

Since Henry’s body wasn’t found at the time, she repeated the eulogy by the wall of the missing. Other students did the same for their silent heroes.

“To deliver the eulogy, it was kind of like the final moment of all of the learning about them that we'd gone through,” Taylor said. “That part was sad, but it was also just sad to be reminiscing about what had happened to them, telling that to everybody. It was a moving moment.”

Flynn, whose grandfather served in World War II, said watching her student deliver the eulogies was a highlight of a trip with many memorable moments.

“To see the beaches where all these young men ran ashore, it's just so moving,” Flynn said. “And just the tactical experience of touching that same sand and being in the same place where all those ships were coming ashore at the same time. The huge armada, 6,000 vessels crossing the English Channel. Just so amazing to imagine.”

“It was definitely an amazing experience,” Taylor added. “It was very moving to walk on the beaches and (in) the very footsteps that they might have taken if they if their ship hadn't have gone down, and the footsteps that their brothers in arms did take.”

Taylor and Flynn came home with more than memories. They brought news to the Pieper family that Henry’s remains had likely been identified years later and were buried in Belgium, something they found out while talking with a Department of Defense forensics expert. Flynn brought back knowledge she can share with other students in Ainsworth. And both returned with the desire to make sure people don’t forget about those who died during World War II.

“Having them study a silent hero from their own state really helps them make a personal connection to the sacrifice that was made by so many, by really truly understanding one person and their life and their sacrifice,” Flynn said.

“The ones that we don't necessarily hear about in the movies and in books,” Taylor said. “Just because they didn't die in a big glorious way didn't mean that they weren't important.”

“Henry and Louie Pieper gave the ultimate sacrifice for their country,” said Taylor, concluding her eulogy at the Normandy American Cemetery. “But I’m sure that their sacrifice was not made in vain. It is extremely hard for me to stand here and say that these 19-year-old brothers’ sacrifice had a purpose. But this is how I must view it, no matter how difficult it is for me to understand. This is what they would have wanted. They were fighting to be together, and then they gave the ultimate sacrifice while fighting for their country. I stand here with the blessing of their youngest, and only living sibling, Mary Ann, to tell the world about their sacrifice. I will never forget the sacrifice Henry and Louie made for their country, and the sacrifice they made for me.”

Vanessa Taylor's work also helped relatives learn more about Henry and Louie Pieper. Louis Henry Pieper, who lives in Tucson, was named for his twin uncles, but never really knew a lot about them until he was told about Taylor's web site and research.

"I've been told that I was named after them," Pieper said. "But beyond that my parents didn't speak of them much. It was a very honorable and made me proud to think of what my uncles did on D-Day. Just reading the article brought many tears to my eyes."

Now Pieper and at least three other relatives will travel to Creston, Nebraska (hometown of the Pieper twins) to take part in Memorial Day events.

UPDATE (June 2019): Thanks in part to Vanessa Taylor’s research, the remains of Henry Pieper were identified, and during a ceremony in 2018 were re-buried next to his brother in Normandy. Learn more: