Housing hens ruffles some feathers in the egg industry

This may be the year of cage-free eggs. Several food companies and restaurants have announced timelines for phasing out eggs laid in cages. That’s pushing some major egg producers to make changes. But there’s more to housing a hen than square inches.

Cage-free eggs could be coming to a breakfast near you.

Food companies from Starbucks to McDonald’s to Kellogg’s, have plans to phase out eggs laid in conventional cages, a victory for animal welfare advocates who have pushed for changes for years.

But some egg farmers argue the cage-free barns are actually less humane than traditional hen housing.

A primer on how egg-laying hens live in large production facilities: The vast majority are housed in cages that hold six or eight birds in barns that can hold tens of thousands of hens in all.

In cage-free barns, hens have perches, nest boxes and the freedom to fly, roost, and even dust bathe on the floor. It takes about twice as much space to house the same number of birds in cage-free housing. 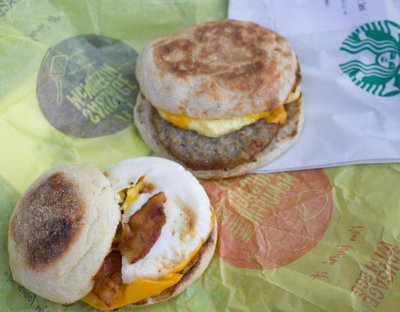 Starbucks and McDonald’s have both committed to making egg sandwiches and other fare from eggs laid by hens that live in cage-free environments. (Photo by Amy Mayer, Harvest Public Media)

The large food companies going cage-free see an opportunity to win points with animal-conscious consumers. And

now mandates more space per hen, though it stops short of abolishing cages.

This fall, in response to greater demand, the nation’s third-largest egg producer, Rembrandt Foods, committed to segueing all of its millions of chickens into cage-free barns. Currently about 15 percent of its flocks live in those.

“We believe there is going to be a future need, and an increase in future need, for cage free,” said Jonathan Spurway, a vice president of the Iowa-based company. “We are committed to a cage-free standard, and so as a consequence, anything that we do in terms of new barn builds, and investments, will be associated to that standard.”

The Humane Society of the United States has applauded the companies’ announcements, even though Josh Balk, senior director for food policy, says the changes do not really go far enough for the hens.

“Most don’t have outdoor access and the flocks are still too large,” he said, “but it’s a dramatic improvement over being confined in a small cage for their entire life.”

The push for cage-free eggs certainly has its critics within the industry. Ken Klippen of the National Association of Egg Farmers, which represents about 300 smaller egg producers, contends that cage free is less humane because chickens establish a literal pecking order. In traditional cages with groups of 6 or 8 birds, the pecking is dispensed with quickly.

“Now, when you compare that to cage-free systems, where there are several thousand chickens loose on the floor,” Klippen said, “you can imagine how hen-pecked that lower chicken on that order is.”

Klippen says the humane rhetoric also implies that the farmers who have switched to cage free, who make up a small minority of the industry, are doing something better than the rest.

“It basically takes the other 92 percent of all farmers producing eggs and throws them under the bus,” Klippen said. 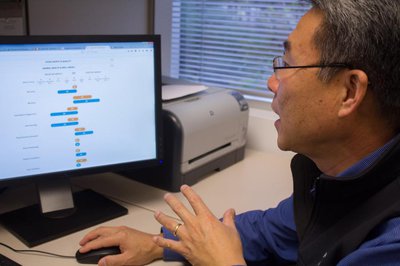 Klippen does have some research on his side. Iowa State University professor Hongwei Xin has

—traditional cages, cage-free barns and a sort of compromise system called enriched colonies, which some California producers have adopted. In those, hens live in groups of about 60 birds together.

In his research, Xin has found the most hens die in a cage-free setting.

“That mortality [is] primarily from some cannibalism,” Xin said, “from some mechanical injuries. As the birds move from place to place, [they] probably get injured.”

Cage-free systems also did not fare as well in tests on worker safety and environmental impact in Xin’s research. But as the industry pours resources into cage-free systems, Xin says better management may improve some of those areas. (For a comparison, see this infographic from Xin’s research group.)

“Basically, the conclusion is that each system has its pros and cons,” Xin said.

The egg industry can diversify to meet fickle consumer demands here in the United States, but with persistent concerns over egg prices and sustainability of the industry, Xin does not expect cage-free eggs to take off worldwide.

Global brands Starbucks and McDonald’s are only promising cage-free breakfast sandwiches in their North American stores.