Activists and police gathered at the Malone Community Center in Lincoln, first for a discussion and then for a rally announcing the new plan. 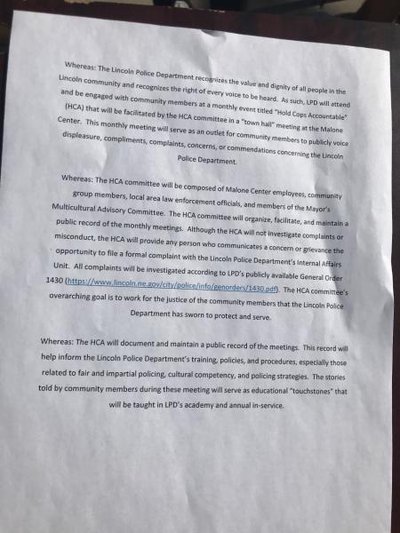 The committee plans to hold monthly town hall meetings. At these meetings members of the public can express their thoughts about the Lincoln Police Department and their conduct, whether positive or negative. The records of community input will be used in LPD training, policies, and procedures.

The committee will not investigate accusations of misconduct, but instead will give people an opportunity to file a complaint with the LPD Internal Affairs Unit.

The plan came after several days of protest in response to the death of George Floyd in police custody in Minneapolis.

Ishma Valenti is a community organizer who took a lead role in developing the plan. He called it a living document.

“Obviously we need to do more. Obviously the work is not done. We all know that or we wouldn’t be here right now," Valenti said. "No one would be taking the time to make for sure that we recognize that our work is not done. So again we will start with this that is going to be added more. I’ve been listening. I need to listen more. I want to hear more.”

The first “Hold Cops Accountable” town hall is tentatively scheduled for the third week of June.