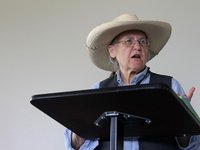 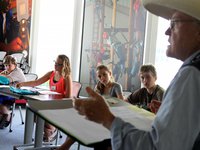 "Diamond Dick” and “Bright Eyes” will join a host of historic Nebraska figures on the stage this week. The Chautauqua Festival – a week of notable history and dramatic storytelling – began in Norfolk Wednesday, and this year, some of the area’s youngest storytellers will be charged with conjuring up the past.

“C-H-A-U-T-A-U-Q-U-A Chautauqua!” At a youth workshop in Norfolk this week, a half-dozen kids learned how to research historical figures from a couple of historians.

The workshop is part of a week-long series of events at the annual Chautauqua Festival. Chautauqua is a form of storytelling that was popular in the 1800s. It’s live reenactment. Scholars and actors embody historic figures, share their stories, and take questions from the community. In Norfolk this year, professionals will perform as notable Nebraska figures like Willa Cather and Ponca Chief Standing Bear. But these young storytellers will bring to life some of the state’s more obscure figures.

“I am Doctor Susan La Flesche Picotte,” 10-year-old Kalie Drahota said. She picked the nation’s first Native American female doctor—a woman who belonged to the Omaha tribe. “I just want to be a doctor when I grow up, and she just like connected to me somehow.”

12-year-old Kellen Carney picked Alice Fletcher, a woman who helped write legislation in the late 1800s that allowed the federal government to survey and divide tribal land. “I picked her because from what I know about her, she helped write the Dawes Act,” Carney said. “I think she tried to help the Indians, but ended up hurting them more than she helped. So I kinda want to learn from her mistakes so I don’t make them.”

Some of the other figures include Susette “Bright Eyes” Tibbles, a member of the Omaha tribe who was an advocate for Native American rights, and Dr. Richard Tanner, or “Diamond Dick,” a Norfolk physician who was a character in Buffalo Bill’s Wild West Show and held the record for the longest single horseback ride. Historian Ann Birney, also from Ride Into History, said it’s important to create new experts on historic figures who may otherwise be forgotten.

“Somebody else might know as much as they do, but maybe not,” she said. “Maybe that person won’t be around that much longer, and maybe there’s been a book written, but not on most of these people.”

These kids will “become the experts and keep those stories alive,” she said, “which also gets us all to thinking about what stories are important to us and why should they be kept alive.”

About a mile from the workshop, a tent went up on Monday in a wide open green space next to the library. Raising the tent for the festivities used to be a community event, but after 30 years of hosting the festival, organizers have learned that’s not always the most efficient route. Now, a professional crew gets it done in a couple hours. Kristi Hayek, with Humanities Nebraska, which sponsors the festival, said it’s still a community affair—and a chance to engage people in history.

“Here you have these historical figures that are right there in front of you, interacting with the audience,” Hayek said. “I think it’s a little more of a magical way of experiencing history and experiencing the theme that we’re trying to have people explore.”

That theme is Free Land: 1862 and the Shaping of Modern America – the impact of three laws that passed within six weeks of each other: The Homestead Act, Morrill Land Grant Act and the Pacific Railway Act. Jessica Chamberlin, the local coordinator who helped bring the festival to Norfolk, said understanding how we got to where we are helps communities make decisions about the future.

“Just like the Homestead Act brought tons of new immigrants to this area, well, we’re experiencing some different immigration now,” she said. “It just gives us that lens to understand how this is a part of civilization; it’s part of our society, it’s not something that’s brand new to us.”

Chamberlin said the Chautauqua style also reminds us history was lived out by real people in real time. Maybe Norfolk’s young storytellers can be a reminder.

“I am a historic, researcher, scriptwriter, actor!” the kids shouted out in unison, as the workshop began. “I have two responsibilities: accuracy and entertainment!”

The Chautauqua Festival continues in Norfolk through Sunday and then picks up in Scottsbluff/Gering on June 25. The youth performers take the stage in Norfolk on Friday.