The Legislature gave first-round approval Tuesday to allowing interest rates up to 29 percent on installment loans, despite arguments it was the wrong thing to do in a pandemic. And, the federal government responded to the latest delay in expanding Medicaid in Nebraska.

Currently, Nebraska caps interest rates on installment loans at 24 percent on the first $1,000, and 21 percent after that. A bill proposed by Sen. Brett Lindstrom would raise the limit to 29 percent. Lindstrom said such loans fall in between payday loans, which voters last year limited to 36 percent interest and are available to people with no credit, and regular bank loans, available to people with good credit at lower rates. And Lindstrom said installment loans are regulated by the state banking department, making them a better alternative for consumers than online loans, which are unregulated and charge higher interest rates.

Sen. Mike Moser, supporting the bill, acknowledged the interest rates on the loans are high, but he said they serve a purpose.

“It might be that your water is going to be turned off, and you’ve got little children in the house. Maybe you’re going to be evicted because you’re a month behind in your – or several months behind, in your mortgage payment. And you do need to solve that problem over a few months’ time because this higher interest rate is just going to cause you more problems in the long run. But in the short term it could help out some family,” Moser said.

Opposing the bill, Sen. Machaela Cavanaugh said lawmakers should provide other solutions, like housing and food assistance rather than high-interest loans, to help people deal with such problems.

“If people are losing their homes at such a rate that they need to seek these types of loans, we need to be evaluating what we are doing in this state. Is the cost of living that we’re allowing too high for the wages that people are earning? If people can’t afford food, what are we doing?” she asked.

Another supporter, Sen. Matt Williams, mentioned OneMain Financial, an installment loan company that was the only testifier other than Lindstrom at a hearing on the bill last month.

“The rate at which their profits are increasing – I’d say that’s more than doubling – does not demonstrate an industry that is struggling and that needs further expansion in their ability to increase their rates. Sounds like they’re making a pretty decent profit and proud of that, as they report to their shareholders,” Cavanaugh said.

Sen. Tony Vargas said the bill needed to incorporate more consumer protections, including requiring analysis of people’s ability to repay, limits on origination fees, and limits on the number of loans any person could get in a year. After Lindstrom agreed to work with him on that, senators voted 27-9 first-round approval of the bill.

The Legislature also, with almost no debate, voted 43-0 first round approval of the so-called “Step Therapy Reform Act.” Step therapy, dubbed by critics “fail first,” is a process used by insurance companies to require patients try less expensive drugs first before a more expensive drug prescribed to them will be covered.

The proposal advanced Tuesday does not prohibit step therapy. But it would provide exceptions, including when a doctor judges the substitute drug is likely to be ineffective, based on clinical practice guidelines or peer-reviewed journals.

And, the federal government is responding to the latest delay in expanding Medicaid in Nebraska. On Feb. 12, the Biden Administration said it probably wouldn’t approve additional requirements the Trump Administration had said Nebraska could impose on people to qualify for vision, dental, and over-the-counter drug coverage. Those requirements were to begin with things like taking a health screening, and then increase to include work, study, or volunteer requirements.

Last week Kevin Bagley, the state’s Medicaid administrator, said that change in attitude by the federal Centers for Medicare and Medicaid Services, or CMS, would further delay when most Nebraskans on expanded Medicaid could get vision, dental, and over-the-counter drug coverage. People were supposed to begin qualifying in April, to get benefits by October. But Bagley said last week even getting federal approval to drop the extra requirements, along with the need to renegotiate contracts, could produce a six month delay.

Asked how long CMS would take to approve if Nebraska wanted to drop its extra requirements, a CMS spokesperson said she could not not speculate. But she added “Should Nebraska choose to amend its state plan and offer a more comprehensive benefit package to all beneficiaries eligible in the adult group, CMS stands ready to work with the state on their request.” 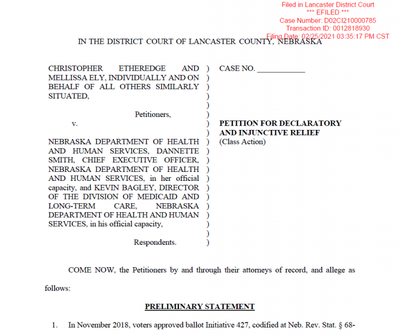 To read the lawsuit filed against the state on Medicaid expansion, click here.

Meanwhile, the Nebraska Appleseed Center for Law in the Public Interest has filed a lawsuit challenging the legality of imposing extra requirements in order to get extra benefits under the state’s Medicaid expansion plan, known as Heritage Health Adult. Appleseed’s Molly McCleery explained the group’s reasoning.

"The statute that was passed by voters specifically states that no greater or additional burdens or restrictions on eligibility, benefits, enrollment, access to healthcare services can be imposed on the expansion group compared to any other population that’s eligible for Medicaid. The two-tier system in the Heritage Health adult plan conditions eligibility for benefits on meeting or proving eligibility for exemptions to requirements that are not imposed any other population,” McCleery said.

Bagley, the state’s Medicaid administrator, had no immediate comment on either development.