High School Football Takes the Field; An Attempt at Normal During Pandemic

A hot August Friday gave way to a warm evening as the fans arrived at the football field at North Bend High School. When the public address announcer noted, "we have a beautiful night here in Tiger Stadium," it was no exaggeration.

The loudspeakers carried the voice into the drying cornfields to the west. 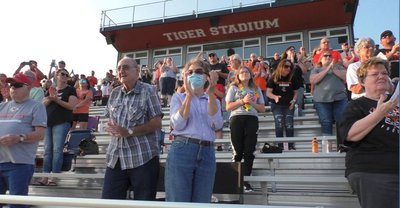 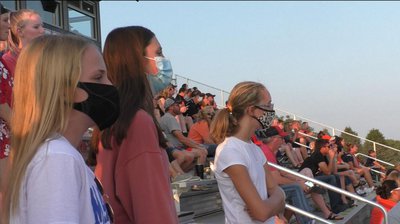 North Bend Fans were limited to every other row and left empty seats between. 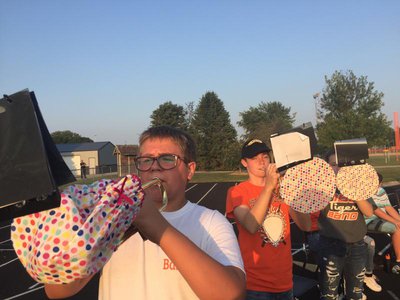 Shower caps were repurposed as coronavirus shields on the marching band horn section. 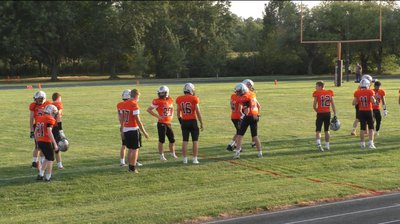 Football players did their best to stay on socially-distanced white dots along the sidelines. (Photos: Bill Kelly/NET News)

"This a most welcome sight and a chance for all of us to have some normalcy and watch two great schools face off in a good old-fashion high school football game."

Families stopped for hot dogs at the booster club snack bar before taking their seats in the bleachers. This year they left with a little extra space between neighbors.

In the year of the coronavirus, this was normal, without being normal at all.

Everyone was relieved. North Bend got the go-ahead to play football tonight. News arrived from the Omaha area earlier in the week that all school postponed prep sports because of an uneasy number of new COVID-19 cases. Sportswriter Stu Pospisil, with the Omaha World-Herald, did the math and figured 97% of the state's 127 scheduled high school football games went on as planned.

North Bend was among the schools that were nervous right up until game time.

After music teacher Alex Crowley led the marching band into the stadium, he conceded, "I didn't even think we'd even be here a month ago."

If there were compromises to get to this day, it was all worth it for varsity football coach Ryan Stieren.

In the weeks heading into this first game of the season, Stieren faced the same seemingly impossible task as dozens of other school athletic departments: how do you keep kids and coaches safe from the coronavirus.

"We have groups of kids going in the locker room (and) we can only have so many kids in at a time. In our meeting room, we're six feet apart. We're having to use larger areas for meeting rooms, and possibly wear masks in areas where we can't be six feet apart,"

Stieren said with rules and signs and masks, the challenge in a COVID world becomes getting teenagers to adjust behavior and make good choices.

"Some of them kind of think we're taking crazy steps," he acknowledged, but stands by the fairly strict anti-virus protocols he established on and off the field, even if "I can't see it and they can't see it."

He is sympathetic to students who "want to get back to their old ways of being kids and being able to be social with each other."

In some cases, the parents were a harder sell than the students. Few adults arrived wearing masks. At North Bend, face coverings were voluntary at the game.

To compensate, only so many people were allowed to attend to comply with the directed health measures put out by the Three Rivers Public Health District.

Principal Brenda Peterson explained as she collected special pink tickets from fans at the main gate.

Up in the stands, families and students found yellow caution tape providing a reminder only to occupy every other row.

Throughout the games, the P.A. announcer made announcements, "reminding people, 'hey, social distance," Peterson said. "We want to keep this going, so we need to follow the rules and keep each other safe."

Peterson and the school superintendent made rounds through the bleachers, occasionally encouraging, but not requiring, social distancing.

In the student section, every teenager wore a mask, something required for the privilege of sitting closer together to socialize and cheer. Senior Grace Hunke explained masks were a tradeoff.

"The teachers gave us an option if we didn't want to wear a mask, they would set up a separate second student section for us where we'd be six feet apart."

Hunke said it didn't fly with the Tiger boosters. "We chose to wear masks so we can get as many people into this game as we could."

It was much harder to get a talkative gaggle of cheerleaders and the dance team to maintain the arms width distance before players took the field.

On the sidelines, football players found white dots painted on the turf marking a safe distance between teammates. It wasn't easy for the boys to stay in place, cheering as each drive moved down the field.

Coach Stieren accepts reality; his players line-up against opponents who may not have have been as careful about virus protection.

"We're not social distancing on third and three," the coach said, "however we're going to try to do everything in a way where we can keep this thing going longer."

Belting out the fight song, North Bend's band found itself social-distanced fifty feet away from the bleacher crowd. Seated on the running track, the band leader figured out the spacing using a uniquely marching band calculation.

"In half-time terms, we are 3.2 steps apart," Crowley said. "What we're doing here is we took chairs from our band room, and we put 3.2 steps apart for each chair."

Crowley purchased rainbow polka-dot shower caps on Amazon to cover the brass bells on the horns and woodwinds in a unique effort to corona-proof the instruments.

The band director read a national music education study done by the University of Colorado-Boulder, which found "if you put a terry cloth on a brass or woodwind instrument, that diminishes the risk of students getting secondhand exposure for COVID-19" by way of an aerosol spray from the instruments.

There were comments from seniors about it not being as loud and as enthusiastic as past games.

"Usually we're like, shoulder to shoulder as close as we can get," said Grace Hunke. "Like we squeeze it in." She was sitting next to Macy From.

"Well, it definitely feels like there's way less people, and we aren't as loud because it's more spread out."

Speaking through his face mask and over the crowd noise, Carter Richardson told a visitor, "we don't want to do it obviously, but you kind of have to. It's either this or no game.

And for Hunke, that was reason enough.

"Thank goodness because it wouldn't be a senior year without it!"

Principal Brenda Peterson knows it's important to her students and schools across Nebraska, explaining, "it's just one of those pieces of high school kids need, they need to have the Friday Night Lights, so it's just it's important to keep it going."

"It gives them a sense of hope just so they can make it to the next week and hopefully the next game, and a lot of people didn't think we'd make it this far."

A big win against Fort Calhoun put the North Bend Tigers in the top ten in Class C-1. It was a good season opener, as long as no one gets sick in the coming week.

It's essential to keep all that in perspective, according to Coach Stieren.

"I told my seniors tonight; this could be it. This could be your last game as a football player. This can be taken away in a heartbeat," he said before the game. "I think our kids have more of a sense of urgency."