Like a dusty old photo album, heirloom seeds have been passed down through generations. But today’s gardeners likely wouldn’t have access to many of their favorite heirloom plants if it weren’t for the work of the Seed Savers Exchange.

Most vegetables today are bred by seed companies to be hearty and easier to grow. They’re created by cross-breeding different varieties and selecting for specific characteristics. Seed Savers in Decorah, Iowa does things differently. It’s one of the world’s largest seed lending libraries specializing in historic, non-hybrid plants, or heirlooms.

“We have gardens all over the place, just little gardens,” said Seed Savers’ Steve Carlson. “It’s not 890 acres of just plowed land, this is 890 acres of rugged, limestone bluffs and forests, and valleys, and pastures.”

Unlike the most of Iowa, Decorah’s limestone bluffs escaped the last glacial period. Now they provide natural barriers between gardens so that rows of Dragon carrots, Trail of Tears beans, and Silver Queen okra don’t cross pollinate.

Before World War II, most produce grown and sold in the U.S. were heirlooms. Today, the majority of seeds are hybrids, bred by scientists to express certain traits. 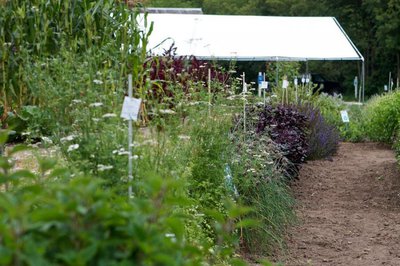 Some of the rarest plant varieties in the world bloom at the gardens of Seed Savers Exchange in Decorah, Iowa. (Photo courtesy Chiot’s Run/Flickr) 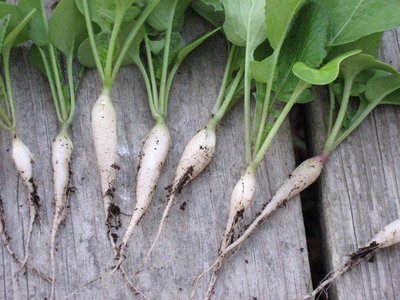 Heirloom aficionados enjoy a connection to the past. By definition, Carlson explains, an heirloom plant has a history of being grown by a specific family or in a specific place.

“These are seeds with histories, with stories,” Carlson said. “And they are related to specific recipes even.”

It was a connection to the past the inspired Seed Savers founders Diane Ott Whealy and her then-husband Kent Whealy.

As a wedding gift, the pair received seeds of German pink tomatoes and morning glory from Diane’s grandfather. His parents carried the seeds with them while emigrating from Bavaria to Iowa.

“Shortly after Diane got these seeds from her grandfather, he passed away,” Carlson said. “So Diane and Kent felt this responsibility to ensure these seed varieties that had been passed down in her family for multiple generations survived.”

In 1975 the Whealys started Seed Savers, trading seeds with about 30 gardeners. With the popularity of hybrid seeds booming, Seed Savers wanted to preserve these older varieties. They believe the best way to preserve a plant variety is to grow it.

“They’ve suddenly become novelties again,” Miller said. “I think they’re considered to be gourmet, too. You find heirloom vegetables on a lot of restaurant menus that serve really high-end food.”

Today, the Seed Savers Exchange has 13,000 members, reaching all 50 states and about two dozen countries. Some of the world’s rarest fruits and vegetables bloom in northeast Iowa.

One Seed Savers member, Jere Gettle of Mansfield, Mo., joined in the 1990s.

“I started trading seeds with people in Australia and Iraq,” Gettle said. “That really was what greatly influenced my interest.”

“It was an amazing organization that grandfathered the whole heirloom movement,” Gettle said. “They really didn’t’ start it…there were other companies that coined the word before. But they were the one that brought it to the public’s view.”

Gettle says his business continues to grow. In fact, the recent recession was a lucrative period for Baker Creek. Many people returned to gardening to save on groceries and supplement their income.

From bistro plates to home gardens, millions are able eat heirlooms today thanks to seed savers like Seed Savers Exchange.

With Conventional Farmers Embracing Dicamba, Specialty Crops Likely Next in Line for Damage
America’s dairy cows are milk-producing machines, but is there a ceiling?
To fend off their plastic imitators, Christmas tree growers band together