Healing Machine: Preserving the legacy of an eccentric Nebraska artist 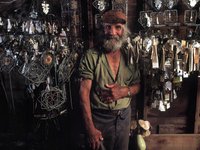 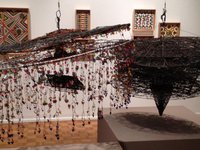 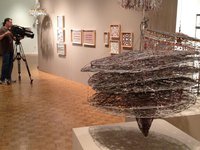 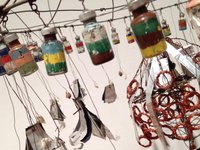 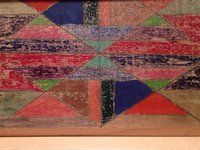 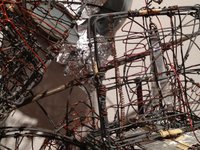 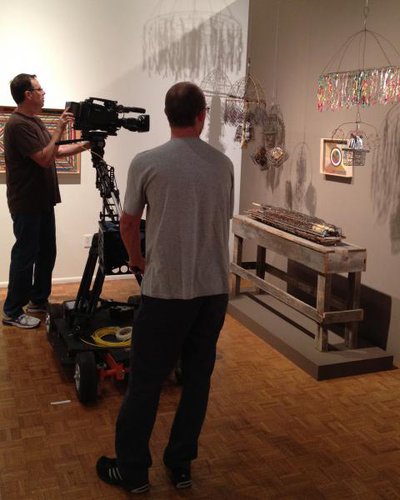 When visitors to the John Michael Kohler Arts Center in Sheboygan, Wisconsin walk up to the rustic wood shed built in the main gallery they aren’t quite sure what to make of the cluttered, twinkling objects on display. They might be mistaken for homemade wind chimes or mobiles. Intricate, even delicate webs of wire, foil, and beads are clustered together. One man, an eccentric Nebraskan, made nearly 400 of these constructions.

Leslie Umberger, once a curator at the Kohler, calls it a healing machine. The creator, Emery Blagdon, called them his “pretties.”

“They are made of all kinds of things predominantly wire, both standard hay baling wire and copper wire,” Umberger said, describing the work. “They have magnets and other little treasures rescued from inside of cast-off radios and televisions and things like that.”

Blagdon, who passed away in 1986, never referred to himself as an artist. In his view, he was a man building a machine.

Everyone in Stapleton, Neb., the nearest town to his remote farm, was familiar with the wild-eyed, shaggy-haired man always quick to share his often baffling outlook on the powers of the universe with people who wanted to know more. 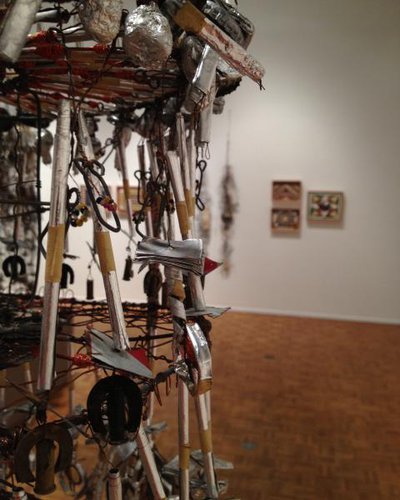 These wire creations, in his mind all working together, had the power to improve health and enhance a person’s well-being. As the catalog prepared for Blagdon’s exhibit explained, the Nebraskan “believed that the earth’s energies might be put to …use. He believed they held the inherent power to heal, and he set about making a “machine” to properly channel these powerful forces.”

The pieces include “lots of tin foil and other things that he thought might kind of help in the conductivity,” Umberger explained. He constantly tinkered with new additions “not knowing what would work, but kind of in his never-ending quest to figure out what would be the best way to make it work.”

It certainly worked for Dan Dryden. He is the man credited with saving Blagdon’s magnificent and crazy work.

In the 1970s Dryden ran his family’s drug store in North Platte, Neb. He remembers the day this unusual man walked into the store.

“He was ragged, long, grey hair, beard, some missing teeth,” Dryden recalled. “He looked kind of like a hobo and he looked me right in the eyes and he said, 'I’d like to buy some elements.'”

It was Emery Blagdon but initially the druggist wasn’t sure what the man was talking about.

“He started telling me about his work and his machines and they had energy fields and he was making these devices for healing purposes and then he came up with the idea that he wanted earth elements,” Dryden said.

Dryden was drawn into Emery’s unique theories. The idea of using some minerals to create electrical fields had some logic “because earth elements have polar qualities. They’re made of ions, which have negative and positive charges.” After giving Blagdon some bottles of mineral salts, Dryden said he could tell “he was very pleased about the whole thing.”

“That was enough for me to be curious about what was going on,” Dryden said.

Trusting his new friend, Blagdon invited Dryden to visit his farm half an hour north of town and examine the healing machine. The experience made a vivid impression. They walked to an unpainted shed, only about 800 square feet with a small room attached that Blagdon used as his workshop. There were holes in the wall that allowed a whistling wind to roll through the interior. 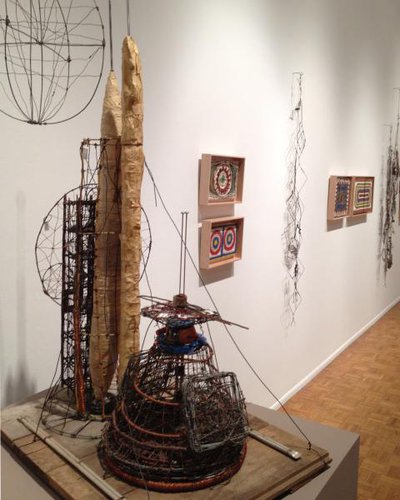 A sampling of the Blagdon works on display at the Kohler Arts Center. (Photo by Kelly Rush, NET)

“He opened the door and walked a few paces and flipped on some light switches and this rainbow of colored lights came on, some of them were blinking, some of them were not and they were all reflecting off of these bits of tin foil and copper wire – I’ve never seen anything like it before or since,” Dryden recalled for the producers of the NET Television documentary “Emery Blagdon and His Healing Machine."

It had been 30 years since the day he first laid eyes on Blagdon’s creation but as he spoke Dryden's voice cracked and his eyes moistened.

“He would kind of turn his hands and take mine with him and turn it and say, 'Now do you feel this energy field here?' Then he would drag me along to another piece and say, ‘Now, this one’s different.’ The implication was that they worked together.”

Blagdon told Dryden and any other visitor this shed filled with “tons of metal” had the ability to heal, but “it was all very non-specific.”

“He could only really say that these constructions had energy fields and people that came in there said they felt better and they had every malady you can think of.”

Ten years later, Dryden had moved to New York to pursue his dream of becoming a sound engineer. He returned to North Platte for a high school reunion and decided to take a friend out to Blagdon’s farm only to learn he had died just a few weeks earlier.

The shed, with all of its miraculous constructions inside was put on the auction block as part of an estate sale. Dryden decided he would buy it, save it and preserve it as one large work of art even if it was made of “lots and lots of components.”

He and his partner catalogued the dozens of individual pieces. “We opened the shed and started looking around to see what it was that we were dealing with and we found that the whole shed was lined with nails and over each nail there would be a loop of wire. Hanging from that would be a bunch of stuff …foil and wrappings with copper wire and strip of metal cut into shapes and bent around. All kinds of stuff.”

Dryden also noticed something familiar. He spotted “little vials of earth elements wired up into the things.” They were the mineral salts he had sold him at the pharmacy.

They disassembled and moved the structure and individual works to a warehouse. Selecting a few of the wire constructions, Dryden successfully marketed a traveling exhibit to a succession of small galleries around the country. Just those samplings created a steady buzz about Emery Blagdon and his visionary and meticulously crafted machines.

The entire shed was rarely seen. It was reassembled only twice, in Lyon, France and again at the Philadelphia Museum of Art in 1999.

In 2004 the Kohler Arts Center in Sheboygan, Wisc. acquired the shed and its components. The Kohler Art Center specializes in displaying and acquiring the work of “self-taught artists,” the type of person creating art for their own enjoyment who may not realize they’ve created something extraordinary.

Umberger said when she first saw Blagdon’s creation it differed from the other “craft-based” works she had admired as a curator. What made it distinctive, in her view was “this idea that he had built a machine. That it was a functional unit.

“It was really important to him that this was a functioning thing,” Umberger said. “It was something you needed to enter and not only experience, but have the effects of it really impact you mentally and physically.”

This year the Kohler put all of its Blagdon acquisition on display for the first time. They created a facsimile of the Nebraska Sandhills farm shed. 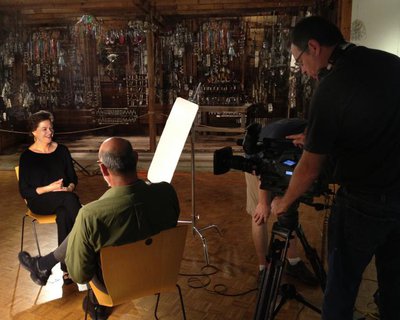 Since Blagdon created the healing machine as one unit and everyone involved felt strongly that was part of its appeal, some choices had to be made about showing off the craftsmanship of individual pieces while giving visitors an idea of what visiting the shed would have been like.

“It’s a little bit of a tricky territory because we’ll never recreate that exactly,” Umberger said.

She is still grateful the work did not end up either destroyed or sold off piece by piece. “If Dan Dryden hadn’t recognized what it was that Emery had made as a real valid important body of work, we really would have lost an American treasure,” Umberger said.

Dryden was so moved by Emery Blagdon’s commitment to his personal vision he changed his own life course.

“The way I saw it, he was a person who found his vision, his passion, pursued it and let everything else take a secondary role and that attitude was something that resonated deeply with me,” Dryden said.

Encountering Blagdon and appreciating his commitment was a significant reason he left the North Platte pharmacy to pursue his dream career. He’s now a successful sound engineer in New York City, working with a number of prominent musicians.

Watch a preview of Emery Blagdon and His Healing Machine