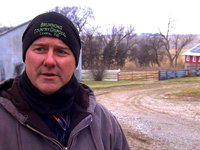 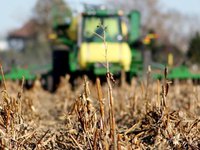 Harvest Public Media and Inside Energy are reporting on how energy fuels our food system. Food production consumes about a fifth of the U.S. energy supply. Some farmers are trying to cut back on the coal and gas used to grow our food.

By some estimates, producing our food consumes about a fifth of the nation’s energy supply. It takes a lot of diesel to move tractors and semis around the farm, and electricity to pump water and dry grain. But some farmers are trying to cut back on the coal and gas they use and make our food system more energy efficient.

When winter comes to Greg Brummond’s farm in northeast Nebraska, he spends his days in the machine shed fixing all the things that broke through the year.

The shed is huge. There’s room for a semi, sprayer, combine, saws, grinders, drills and even a kitchen. It uses the most power on the farm. And on Brummond’s farm that includes solar power. 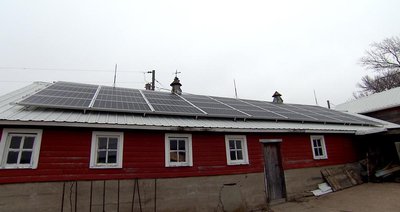 Thirty-six solar panels on top of this old farm shed can provide up to 10 kW of energy. This array cost about $39,000 although tax credits and USDA funding will reduce the cost. (Photo by Brian Seifferlein, Harvest Public Media)

Down the hill is an old, red and white shed that was going unused, until Brummond installed a brand-new 10-kilowatt solar array on top. The system now delivers about half of the farm’s electricity.

“We’ve got 36 panels down there,” Brummond said pointing to the rows of black panels on the shed’s white steel roof. “It just made sense to utilize something we have and not just keep pulling electricity off of the grid.”

Think about all the sheds and barns scattered across farm country that could hold up solar panels. So far, just 3 percent farms in the U.S. use renewable energy, including solar, wind, and other kinds, according to USDA’s 2012 Census of Agriculture. While not a huge proportion of the 2 million U.S. farms it has been growing quickly in recent years. The price for solar panels has plummeted, and farms can qualify for financial incentives from the U.S. Department of Agriculture.

Once the panels are paid for, Brummond expects to cut thousands each year from electric bills. But he says another reason for going solar is to stop relying so much on fossil fuels. 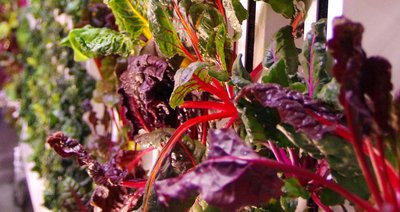 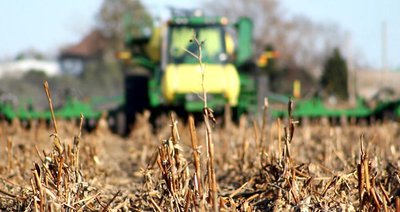 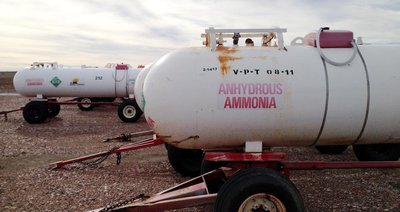 “A few years back I flew over Gillette, Wyoming. That’s where a lot of our coal comes from,” Brummond said. “Looking over those humongous holes in the ground where the coal is taken out I thought ‘Wow, I wonder when this is going to run out?’”

USDA economist Jayson Beckman has studied the energy diet of U.S. agriculture. He found overall energy use has been fairly even over the last decade or so. Farms don’t use a lot more or less fuel for tractors or electricity for machine sheds from year to year.

What tends to fluctuate is fertilizer.

“The amount of fertilizer used for corn and wheat, it really weighs heavily on the total energy pie for agriculture,” Beckman said.

That puts corn and wheat among the most energy intensive crops grown in the U.S. But natural gas isn’t the only way to get nitrogen. Farmers can make their own, right in the field, by growing cover crops between one year’s harvest and the next year’s planting.

On a windy winter day, Keith Berns took me to a field test-plot covered with a thin green blanket of plants called winter peas and hairy vetch. Berns is the co-founder of Green Cover Seed in Bladen, Nebraska, which sells cover crop seed across the U.S. 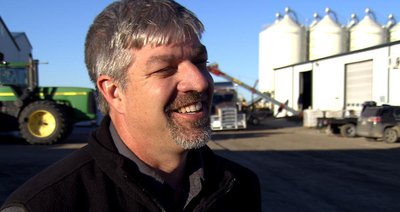 Keith Berns of Green Cover Seed started selling cover crops after using them on his own farm. A cover seed mix for a single field may include dozens of different plants. (Photo by Brian Seifferlein, Harvest Public Media)

The cover crops he grows are not planted to make money, but to keep the soil working over the winter.

“You can take a good healthy soil and you can smell it,” Berns said as he pulled a clod of black dirt out of the ground and held it under his nose. “It just has that really good earthy smell, and a lot of what you’re smelling is those microorganisms.”

Cover crops are known for reducing soil erosion, and farm runoff. But certain plants like peas and vetch feed microorganisms that replenish nitrogen pulled out of the soil by wheat or corn.

“We’ve got organic guys that we work with that they’ll plant a hairy vetch cover crop and they’re consistently producing 150-170 units of nitrogen,” Berns said.

At that rate, Berns says, cover crops could replace most of the petroleum-based fertilizer that would go onto a typical Midwest corn field.

The question is whether that kind of return is reliable. The more time cover crops have to grow, the more nitrogen they can produce. But cover crops are vulnerable to dry and cold weather, and the nitrogen they produce might not all get to the new corn crop at the right time.

Still, Berns says, the more nitrogen that farmers can count on coming from plants means that much less needs to come from oil or gas.

Other parts of the food chain use more energy than farming. Transportation, processing, even our own kitchens are energy intensive. But if farms can grow their own energy or their own fertilizer, they’d be a step closer to making our food system more environmentally friendly.

Editor's note: This story was updated to add context in the area of cover crops adding nitrogen to soil.