It can be difficult to find mental health care in rural America. There simply aren’t enough providers to cover the need over wide-open spaces. A small town in Nebraska hopes to groom local students to pursue hometown careers in behavioral health.

Rural towns need psychologists, social workers and substance abuse counselors, but there is a chronic shortage. The U.S. needs about 2,700 more clinicians to catch up, according to the Department of Health and Human Services.

Outside of metropolitan areas there just aren’t enough providers to go around.

“It’s quite serious because, in Nebraska, 88 out of 93 counties are federally designated as underserved areas for mental health,” said Howard Liu, a psychologist at the University of Nebraska Medical Center and director of the college’s Behavioral Health Education Center.

Liu says physicians in rural areas are often willing to treat some conditions, like ADHD. “But if it’s ADHD plus something like maybe depression, I can guarantee you they’re probably not comfortable,” Liu said.

To receive the care they need, he says people often wait for weeks to see one of the few psychologists in rural areas, or they drive hundreds of miles to see someone in the city.

Winnebago, a small town on the reservation of the Winnebago tribe in northeast Nebraska, knows what that shortage feels like. The town often has luck attracting mental health providers, but they often leave, too. 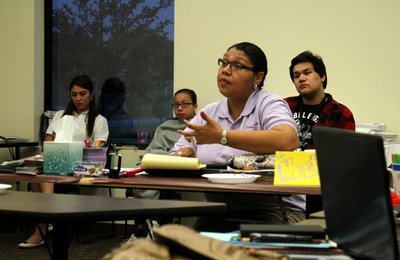 Anitra Warrior gives feedback after a student presentation. Warrior wanted to bring the camp to Winnebago after seeing how it worked in Rushville, Nebraska. (Photo by Grant Gerlock, NET News/Harvest Public Media) 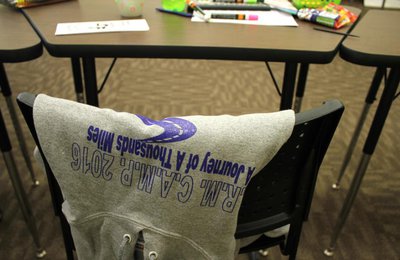 “We can bring providers in who will be here for a while, but once they maybe get their scholarships repaid then they leave,” said Anitra Warrior a psychologist from Lincoln.

Warrior is helping organize a program to change that track record in Winnebago. Instead of coaxing urban graduates with loan payments, Warrior wants to start with students who are already here.

This is the goal of FARM CAMP, the Frontier Area Rural Mental Health Camp and Mentorship Program. The program started in the northwest Nebraska town of Rushville in 2013, where behavioral health workers are also in short supply. Winnebago held its second camp this summer.

The camp is a way to plant the idea of a behavioral health career with hometown students and encourage them to grow into local professionals.

For five days in July, Anitra Warrior led a group of six high school juniors and seniors through college-credit classes. They learned a lot about psychology and even a little about culture.

On the first day, guest presenter Edison Red Nest showed the group how to toss and catch with lacrosse sticks. The game has roots in Native American culture. As he and a student lobbed passes across the classroom, Red Nest told how eastern tribes in the U.S. played lacrosse as a “medicine game” and called it “little brother of war.”

Anitra Warrior says the lesson is relevant. She’s learned first-hand that clients in rural towns, and on the reservation, expect providers to know their culture and engage with the community. That wasn’t really part of her training.

“But it was very much something that was almost a demand,” Warrior said. “That you have that very warm and welcoming feeling to the service.”

FARM CAMP places an emphasis on connecting with community culture. It also puts a lot of effort into making early and lasting connections with students through mentoring. After the week is over, organizers will keep in close contact.

“We’re still in touch with every student who’s ever gone through these camps, and I think that’s important because in both communities many of these campers don’t have easy lives,” said psychologist Catherine Jones-Hazledine, who originated FARM CAMP in Rushville. “This idea of the future can give hope to students who are struggling. They don’t need to know what they’re going to do. They just need to know they have support.” 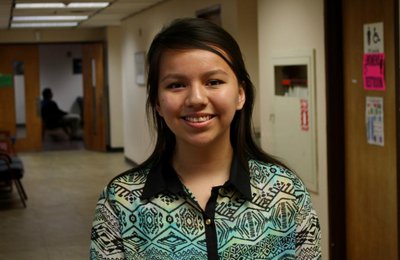 Student Jonna Price's goal is to someday be a social worker in Winnebago. FARM CAMP organizers will keep in touch to adviser her along the way. (Photo by Grant Gerlock, NET News/Harvest Public Media)

FARM CAMP is an example of how some states are trying to catch students earlier to steer them toward the field of behavioral health because shortages like the ones around Rushville and Winnebago persist throughout rural America.

But psychologist Howard Liu says only a handful of kids need to follow through from a program like this to make a big difference for rural treatment.

“One or two people placed in a certain community in rural Nebraska can have a 300 or 500 mile impact,” Liu said. “It’s the difference between a family having to drive eight hours to Omaha versus half-an-hour to someone in their own community.”

At the end of the week, the Winnebago students pitched community improvement ideas to the Tribal Council and leaders from other programs. There was a wide range of proposals: enforce the curfew, round up stray dogs, and expand athletic programs. Jonna Price suggested more culture and language classes in school.

“In the background of the community, youth are lacking cultural awareness,” Price told the group. “I believe it’s very important for us to know about our history.”

“I want to be a social worker, so I’m definitely taking a lot out of this and learning about mental health and how much of a change it brings to peoples’ lives,” Price said.

The seed appears to be planted for a career connected to behavioral health. What comes next is years of mentoring. The plan is to show some extra care to these students who someday may decide to come home and care for their community.