Gov. Pete Ricketts and key state senators challenged each other over property taxes, and a new report shows the difficulty of evaluating corporate tax incentive policy.

A day after the Legislature’s Revenue Committee met to continue work on a property tax relief proposal, (to see a power point on the proposal, click here) Gov. Pete Ricketts held a news conference to criticize the committee’s approach. That approach involves raising other taxes and funneling more money to schools in order to lower property taxes.

Standing before an audience of Realtors, Ricketts took aim at a provision being considered by the committee, to raise the so-called documentary stamp tax on real estate transactions. “If we raise the doc stamp fee, you’re going to make home ownership less affordable. And who’s that going to impact most? Well it’s going to be low income people. Those are the folks who are going to be most impacted, who spend most of their income to be able to afford that home,” he said.

The tax is currently $2.25 per $1,000 of the selling price, so on a $100,000 purchase, it’s $225. Raising it by a dollar, as the committee is considering, would raise that to $325. Revenue Committee Chair Lou Ann Linehan said it’s a fair tax. “On the doc stamp, it’s according to how much you’re spending. So obviously if you spend more you pay more, so I would say that’s pretty equal,” she said. 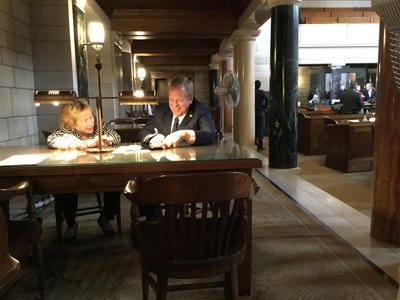 However, Linehan said, the committee is not considering taxing such labor as part of its package “On the home repair, that’s not in there any more,” she said.

The committee decided it was too complicated to distinguish between remodeling, repair, and new construction, so did not include them in its proposal. Linehan said.

When asked about the provision being dropped, Ricketts said it could come back. “This plan has been very much in flux. It’s been a chameleon. So they’ve changed it quite a bit and they’re still not done changing it. So even though something may have been dropped out now, it’s still liable to come back on,” he said.

Linehan acknowledged the committee’s plan is still being worked out And she suggested that was a reason for the governor and senators to hold their fire. “We still don’t know for sure where we’re going to end up. So kind of having these dueling press conferences seems silly to me. But whatever – it is what it is,” she said.

Ricketts also condemned the committee’s overall approach of raising other taxes to lower property taxes. “They’re talking about raising taxes on you to try and get tax relief. It doesn’t make any sense. You can’t raise taxes to lower taxes,” he said.

But Sen. Tom Briese, another member of the Revenue Committee, said he fundamentally disagrees with the governor, and favors substituting other taxes for property tax. “What I’m talking about here is textbook, revenue-neutral tax reform. It’s not a tax increase, it’s tax reform. It’s trying to correct the shift that has occurred over the last decade in particular, over the last several decades, the shift that has occurred to the detriment of our property tax payers,” he said.

In fact, Briese added, he thinks the plan being discussed by the committee doesn’t go far enough. “The plan as presented last night was insufficiently funded in my view to ensure that all Nebraskans, particularly Nebraskans in rural Nebraska receive meaningful and substantial property tax relief,” he said.

Briese said that could be corrected by changing another tax increase being considered by the committee, to raise the sales tax by half a cent, to make it a full one-cent increase. The committee has scheduled a public hearing on proposed changes for next Thursday at 1 p.m.

The report found the program cost state and local governments more than $700 million in foregone revenues from 2008-2017. It gave a wide range of estimates of the cost per job created, ranging from just over $5,000 to well over $200,000 per job, depending on assumptions, including whether the jobs would have been created even without the incentives.

Committee Chair Suzanne Geist said that range could be narrowed, but it would cost money. “There is a deeper dive that can be taken with the data. We don’t have the software in place to do that deeper dive. That was one of the things that we’re wrestling with: Do we want to invest in software that would allow us to see what would happen if there was no incentive vs. there is an incentive?” she said.

Geist said the Legislature will have to decide soon, as the current program is scheduled to expire in June, 2020.