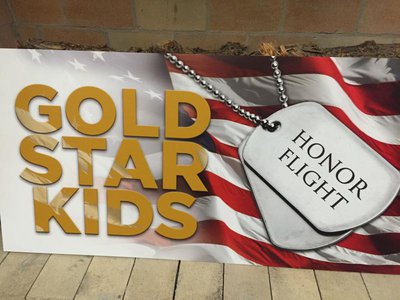 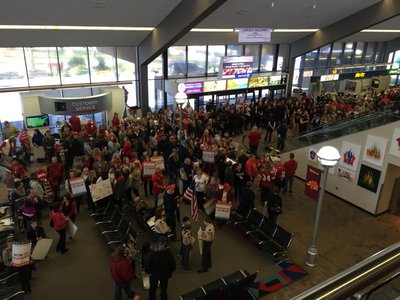 A large crowd greets the families at the Lincoln airport. 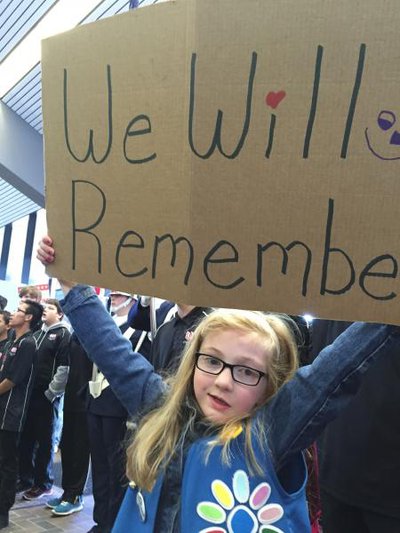 A young girl holds a sign for the families at the Lincoln airport. 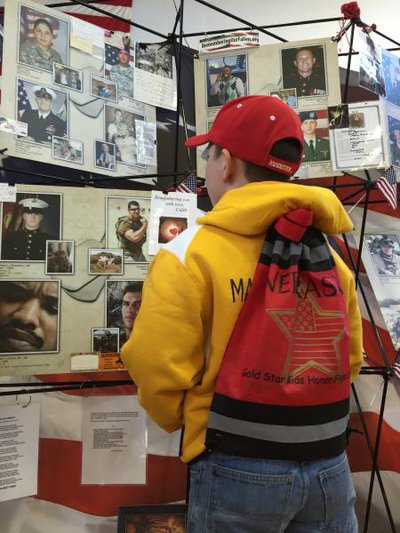 Nine-year-old Kodiak Robinson looks at his dad's photo that is part of the "Remembering Our Fallen" exhibit. 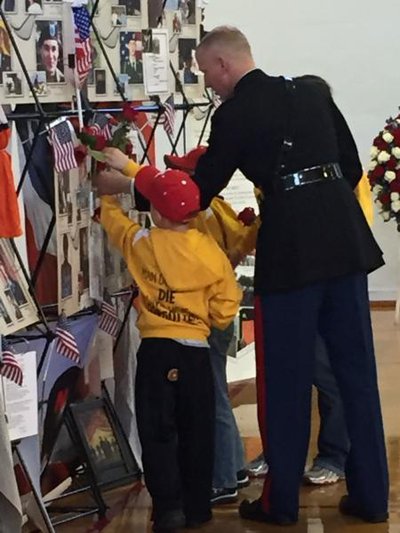 Kodiak and Wyatt Robinson and mom Rhonda (behind serviceman) place roses next to their dad and husband Josh's photo. 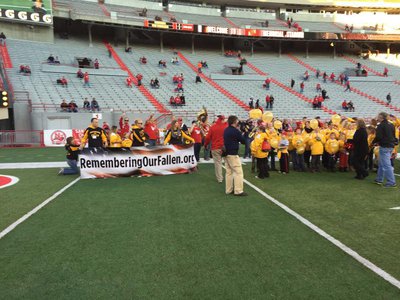 The Gold Star families march onto the football field at Memorial Stadium before the Nebraska - Michigan State game. 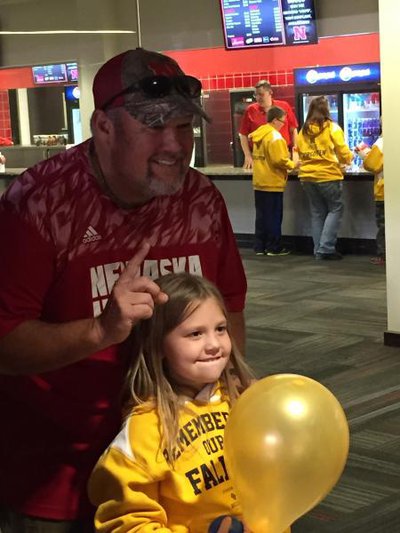 Dan Whitney, also known as Larry the Cable Guy, poses for a photo with a young Gold Star family member at the Husker game.

The Gold Star families consisting of 55 women and children were treated to a short "honor flight" from Omaha to Lincoln Saturday morning. Hundreds of people greeted the families at the send-off at the airport in Omaha, and hundreds more again where there when the plane landed less than 30 minutes later in Lincoln. The flight was modeled after previous honor flights that brought war veterans to Washington, D.C. to see the memorials dedicated to their service.

Bill and Evonne Williams of Omaha, who organized nine veterans' honor flights, also raised funding and organized this weekend's events. They said the event was the first of its kind in the nation.

Several hundred people lined a pathway through the Omaha airport to cheer the families as they walked by. Carla Olson and Vickie Freese held a "Remembering Our Fallen" sign with the note "Free Hugs" added to the bottom.

"I thought it would be fun," Freese said. "We've gotten a couple of hugs already."

"We're parents. We're mothers. We're daughters," Olson added, "and we just want to support the families (who) are in the same boat we are."

Heather Von Loh's husband was a Nebraska National Guard soldier.from Elm Creek. She said she was "overwhelmed" seeing the crowd at the Lincoln airport Saturday morning.

"It's good to know that people still care and they remember and they're thinking about us," Von Loh said.

Iraq Veteran Robert Kugler of Lincoln was among those who turned out to welcome the families at the airport. He lost a brother who also served in Iraq. The sign he brought with him to the airport read "From One Gold Star Family To Another We Salute You."

"I think it's really important for them to know that there are people that are still hurting with our own pain, but we're still here to support them because we're all in this together," Kugler said.

The weekend started Friday night at the Nebraska National Guard training facility near Ashland. The women were treated to dinner and then a "spa" set up in a gymnasium. Professionals were brought in to give them massages, manicures and pedicures. The women also had the chance to get to know each other. Some chose to talk about their shared experiences.

"Getting ready to come is daunting," said Jessica Blake-Arlt of Gretna. "Because you kind of know what you might dive back into and feelings you might tap back into."

"When you go to events like this it definitely brings up different emotions and the stories come back again," said Rhonda Robinson, whose husband Josh was killed while in patrol in southern Afghanistan in 2011. "But it's good to tell the stories over again, because you're then maybe able to help another widow who may or may not know how to deal with certain things."

Rhonda's two sons, 9-year-old Kodiak and 8-year-old Wyatt, also participated in the weekend's activities. Both said they still think about their dad every day.

"Everybody says I look like him. I get dirty a lot and I'm just really rough," Wyatt said.

After the families arrived in Lincoln Saturday morning, their bus was escorted to the Military Science Building on the campus of the University of Nebraska-Lincoln. There they viewed the "Remembering Our Fallen" exhibit that includes photos and personal items for each Nebraskan killed in the War on Terror since 2001. The women and children were given roses to clip next to their husband's or father's photo.

The group traveled by bus to the governor's residence and met Gov. Pete Ricketts. They then returned to the UNL campus, where they wrote special messages to their loved ones. Among the messages from the children were "Dear Dad, I miss you with all my heart," "Hey Dad, I love you and I hope to see you," "Can you send a picture to me?" and "I love you Dad and I know you love me too." One young boy drew a picture of himself, saying he did it "so daddy remembers me." Those messages were then attached to gold balloons that were taken to the Husker football game that night.

After the short walk to Memorial Stadium with a Husker pep band leading the way, the families paraded onto the football field and took photos. They then went their seats, donated by UNL, to watch the game. At the end of the national anthem, they released the gold balloons into the sky with the messages attached.

Bill and Evonne Williams said the goal for the weekend was to recognize those who died serving their country and the families they left behind.

"Every fallen family's fear is the same is that their loved ones are going to be forgotten," Bill said. "So that is our mission: to make sure they not be."

"Maybe for these kids, especially for these children as they grow up they'll say, 'You know what, Nebraskans remembered. I'm going to okay. They gave me that moment and I can hang onto that,'" Evonne added.

Editor's Note: The story featured below about the Nebraska Gold Star Kids Honor Flight aired Wednesday night (Nov. 11) on the PBS NewsHour. Look for another special story on these families and this event in early 2016 on the new season of "Nebraska Stories" on NET Television.

#MyCorona, Filmed in Ravenna During Quarantine, Premieres Saturday in Kearney
Homecoming: The Impact on Nebraska Veterans
NSAA moves to clean up "vulgar, profane, lewd acts" in speech and drama competition