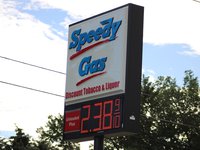 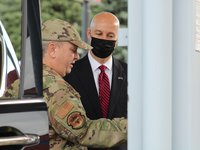 The lines were long Wednesday morning at Speedy Gas.

The Nebraska chapter of Americans for Prosperity covered the Bellevue gas station’s cost, allowing it to drop its prices from $4.65 to $2.38 from 8-10 a.m.

“We just want to help folks out,” said Jessica Shelburn, the state director of Americans for Prosperity. “We're bringing attention to the inflation issues that our country is facing right now.”

Americans for Prosperity, a political group that advocates for less government spending and regulation, set Wednesday’s price for a reason: It was the average price of gas the day President Joe Biden took office.

“If you continue to make war on our energy resources here in this country, of course, you're going to drive up prices,” Ricketts said.

The Republican governor said Biden’s administration “has been kidnapped by radical environmentalists” who’ve made it harder to use American energy, as Biden’s team has transitioned away from oil to more renewable resources.

“It just shows how out of touch he is with what Americans are going through right now,” the governor told reporters.

President Joe Biden has criticized oil companies for making above normal profits and has called for a three-month suspension of federal gas taxes.

GOP critics have long said Biden made a mistake relying on other countries to supply the United States for oil – especially since Russia, a major oil exporter, invaded Ukraine, sending the world’s oil supply into a tailspin.

Prices have risen in other countries, too. For example, gas in Canada increased from $4.34 per gallon in January 2020 to $7.38 a gallon last month, and now tops $8 a gallon, according to the Canadian Automobile Association. A Canadian dollar is worth about 0.77 American dollars, meaning Canadian fuel now costs more than $6 per gallon.

While the governor places blame on the Biden Administration for rising oil prices, many oil price exports say the biggest factor for the higher prices is increased energy demands as the U.S. economy recovers from the pandemic and a shortage of supplies caused by refining that slowed during the pandemic when demand was low.

An estimated few hundred cars stopped Wednesday morning for the nearly half price gas. Americans for Prosperity said 1,750 gallons of gas were sold in the two hours.

For Lewis, it’s tough to imagine high prices and stagnant wages are such a problem in the 21st century.

“It's just breaking my heart that I'm putting over $100 into my gas tank, and it doesn't last more than a week,” Lewis said.

Mike Flood, the Republican candidate for Nebraska’s First Congressional District, said one of the first steps he’d take, if elected to Congress, would be to control government spending.

“Basically, printing money and sending trillions of dollars into the economy has helped create this inflation that has boosted not only gas prices but grocery store prices,” Flood said.

“People are exhausted,” Flood said. “They're fed up. They can't afford it.”

Most economists, however, say that historically high levels of government spending have little impact on overall inflation rates.