A year out from the start of last year’s flooding, many Nebraska communities still feel the impact. One way that manifests is food insecurity, a need food pantries are working to address.

Daniel Boster stood in the middle of a room bustling with people picking out canned tomatoes and jugs of milk. He’s advisor for the Ralston High School National Honor Society, which runs this mobile food pantry at the school near Omaha. The pantry has been open once a month for the past four years.

He and other Ralston teachers saw a need at their school that wasn’t being met. 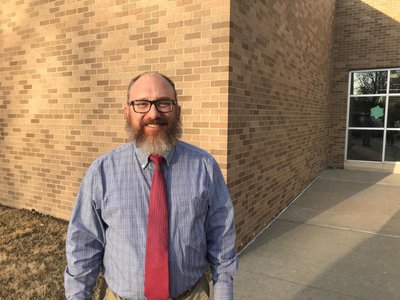 “We were just realizing that our students were in need of some support when it came to food," Boster said. "We had a backpack program in the elementary schools here, but nothing at the high school. A group of teachers got together and said, ‘Okay, could we start a little food pantry in the school?’ We were just gonna do something small. Once it started getting bigger, we knew we were gonna need students to help with it.”

Now the mobile food pantry is run almost entirely by students and serves 60 to 70 families, or about 320 people, per month. Remaining food is taken to an in-school pantry open every Friday for students at Ralston.

The Ralston mobile pantry is run in partnership with the Food Bank for the Heartland, and it’s a model that was important when flooding meant more Nebraskans than usual needed help putting food on the table.

“That was a tool that we used a lot last year,” said Brian Barks, CEO of the Food Bank for the Heartland. “And it’s a tool that we’re continuing to use currently. Through the flooding, we ended up starting mobile pantries in Valley, Schuyler, and also in Sydney, Iowa. And the ones in Schuyler and Valley are still going on and still reaching those people who are still trying to get back up on their feet following last year’s flooding.”

Barks said the mobile food banks helped to address a shortage of assistance in rural areas.

And while flooding hit many different areas of Nebraska, including cities, Barks says the impact continues in those small towns.

“What we learned was that most of the people impacted were in smaller communities, everywhere from Niobrara all the way down to Hamburg and Pacific Junction in southwest Iowa," Barks said. "And we still have communities that are still impacting and rebounding from last year’s flooding.”

The Food Bank for the Heartland is now in a long-term response, continuing to work with mobile food pantries to assist those in need. Their response started with more immediate needs, though. Barks said this was the first time the food bank’s disaster plan was implemented.

“This was a brand new experience for us, and through that, we learned that what was immediately needed at the time was bottled water, snack food items, and cleaning supplies," Barks said. "So we began sourcing product from all around the country in order to get it out to the people who needed it.”

The food bank saw a spike in donations. Last year Barks estimated they received around 680,000 pounds of donated product and around $300,000 related to flood relief. He also estimated those donations came from 37 different states.

That helped address the need created by flooding. As people lost their homes or had to leave unexpectedly, many had a sudden and new need for food assistance.

“We had a partner in Hamburg, Iowa, that had their pantry devastated, destroyed, and they were running food assistance out of the elementary school in Hamburg," Barks said. "We were going there once a week to supply them with product. On average this pantry would serve about 70 households a month. During the height of the flood, they were doing over 700 households a month.” 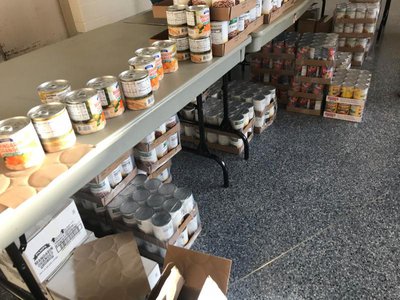 While flood waters have receded, even those areas of the state where flooding did not occur still have plenty of people in need of food assistance.

Back in Ralston, Daniel Boster said they’ve seen an increase in attendance at the mobile food pantry over the years.

“Most of these folks are coming from south and southwest Omaha, and those aren’t areas that were flooded by the river or anything," Boster said. "If anything, we’ve seen an increase over the years because of the economy and the country and things like that more than the flooding in particular.”

Food pantries across the region will continue to work with those in need to make sure families have food on the table, whether that table was flooded or not.