Many Nebraskans may know the name of Daniel Freeman, the first to register a claim under the Homestead Act. His neighbor, Mary Meyer, is less famous. But the story of the first woman homesteader provides a glimpse of how women contributed to, and benefited from, the Act that helped settle the frontier.

On a recent bright fall morning, Robert Graff looked out the picture window of the modern house on land near Beatrice, Neb. his great-grandfather Joseph Graff homesteaded 150 years ago. Robert Graff gestured toward the Mennonite Church just to the east.

“Joseph’s ground goes to where the fence is on this side of the church. Where the cornfield goes up over the hill, that’s Mary’s homestead,” he said. 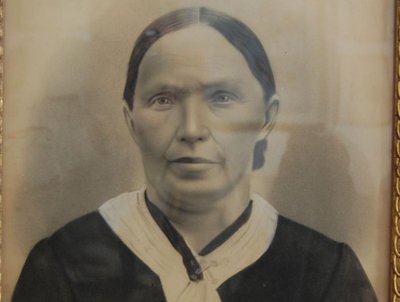 The Homestead Act offered free land to settlers if they promised to live on the land, build a home, make improvements and farm for five years. It took effect January 1, 1863, which is when Daniel Freeman filed the first claim.

Less than three weeks later, Joseph Graff and Mary Meyer filed their homestead claims at the land office in Brownville, Neb. about 60 miles east of Beatrice. “They went over in January, on horseback,” Graff said. “Can you imagine that?"

Genealogist Gail Blankenau, who’s researched historical records for stories of women homesteaders, said that gives Meyer a good claim to being the first woman homesteader. “She’s very likely first. First, she was January 20, 1863. That is extremely early in the history of the Homestead Act. She’d already been on the land for several years,” Blankenau said.

According to Robert Graff, Meyer, her husband Phillip, their daughter Theresa and her husband Joseph Graff moved to what would become their homesteads in 1860. “They decided, 'We can live on this ground until somebody else wants to buy it. So we don’t have to pay for it until then.’ That’s 1860. And then in 1862, the Act was passed; in 1863, you could sign up,” Graff said.

During those years, Meyer’s husband died. Nevertheless, she went ahead and filed almost as soon as she could. Blankenau said that was more common than people think. “Sometimes when we tell homestead stories, we tend to think of 'Little House on the Prairie' where it’s a family. And that was the most typical experience. But there were thousands of women who came out on their own or with small children who did it on their own, and Mary is one of them,” she said.

Blankenau said Mary probably got some help from her son in law, and Graff said she hired a young man as well. But she never remarried, and the homestead remained in her name until she sold it in 1877.

Meyer was hardly the only woman homesteader. In fact, historian Blake Bell said recent research suggests nearly a quarter of Nebraska’s early homesteaders were women. Bell is historian at the Homestead National Monument, on the site of Daniel Freeman’s first homestead, about a mile from the Graff’s and the Meyers’.

Bell said there were important reasons for women to homestead. “Land is power. It really is. And especially in the mid-19th century. And women that are able to acquire land were able to increase not only their economic power, they’re increasing their social and political power as well,” he said.

Bell pointed out in the majority of the 30 states where homesteading took place, women got the right to vote before the 19th Amendment to the Constitution made it mandatory. The same was true in only a handful of non-homestead states.

Bell said voting drove other changes as well. “When you have women in the political arena, all of a sudden you start seeing compulsory education. You see better hospitals. You see better social services being offered, because women are in there voting; they’re fighting for these things that they believe in, that primarily were ignored by men,” he said.

Mary Meyer was making improvements on her new homestead noted on the document when she “proved up,” showing she had met the requirements for the land after five years. The document showed she had a 16 by 26-foot house, fruit trees, grape vines, 35 cultivated acres, a coral, corn crib, chicken coop, and a well.

Thanks to the work of people like Blankenau, Bell and Robert Graff, in the future something similar may be said of Mary Meyer.

How an Ainsworth Teen Is Reviving the Story of Brothers Who Died in World War II
Remembering D-Day on Its 75th Anniversary
In 1969 Three Nebraska Brothers Died on the Same Ship; Their Names Still Not on Vietnam Memorial