Firefighters Make Fire Work For Them On Prescribed Burn 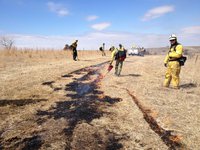 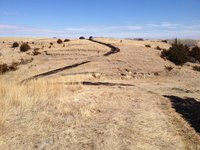 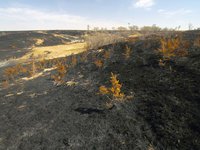 Nebraska’s wildfire season is already underway. Wildfires can be unpredictable and destructive, but prescribed fires that are set deliberately, under controlled circumstances, can be a useful land management tool. Firefighters from all over the country – and the world – come to Nebraska to learn about and train on prescribed burns. 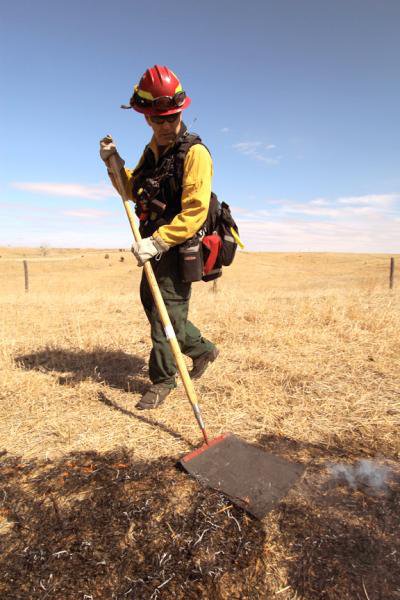 Phil Dye, from the San Francisco Bay area, is the burn's plan chief. He works as a holder, smothering the fire with a flapper or swatter after it's burned the mowline. (Photo courtesy Ben Wheeler.)

If you’re working on a prescribed burn, firefighter Phil Dye from the San Francisco Bay Area says you need to have a few things with you.

“This tool here is called a thaw claw or a hoe. Also of course have a shovel. This is called a fire swatter or flapper,” Dye said.

The flapper looks exactly like a giant flyswatter. But that’s not how it’s used.

Dye and a few dozen firefighters are doing what’s called "black lining" just outside Elba, a small town in north central Nebraska on the Loup River. The crew is split into igniters and holders. They’re walking along a 15-foot wide line of grass that’s been mowed around the perimeter of a burn unit. The igniters light the short grass on fire.

Once the grass has burnt black, the holders drag their flappers on the ground to smother any remaining flames. The black line is a safety measure. The next day, if the weather, wind, and humidity are just right, the firefighters will light the 700 acres inside the black line on fire. The black line keeps that fire from spreading outside the burn unit.

“Basically, it’s a buffer because fire’s not going to burn in an area that’s already been burned,” Dye said.

The firefighters are participating in a ten-day training exchange hosted by The Nature Conservancy and the nonprofit Pheasants Forever. The exchange has two goals: one is for firefighters to train on a prescribed burn and the other is to actually burn 4,000 acres of land to control the eastern red cedar population on the prairie.

Red cedars are native to Nebraska, but they’re starting to take over grassland areas, partly because of us.

“When white settlers moved in though, we began some pretty aggressive fire suppression campaigns you know because people were worried about fire going through their homesteads and beings destructive,” said Ben Wheeler, the wildlife ecologist with Pheasants Forever.

The cedar population has grown so much parts of the prairie look more like forest than grassland. About 25 years ago, land management organizations like the Forest Service went from seeing fire as a threat to using it as a tool. The Nature Conservancy and Pheasants Forever are using prescribed burns to push the cedars out of the grassland and preserve for habitat prairie fowl. Wheeler says they’re also working with local ranchers who use the grassland for grazing cattle. 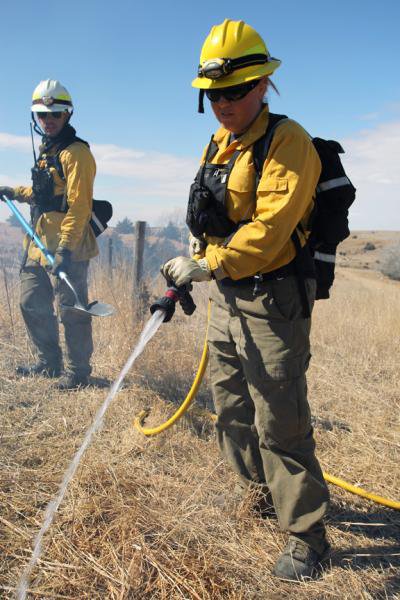 Ashley Whitworth from the Colorado Springs, Co. Fire Department sprays water next to the mowline. This keeps the fire from burning outside the black line. (Photo courtesy Ben Wheeler)

“When you look at these trees, they start growing, they shade out the ground and eventually you don’t have any grass underneath there. And so from a cattle grazing standpoint there’s reduced forage available for those livestock to eat out there,” Wheeler explained.

“It’s sometimes difficult to burn large expanses of prairieland without impacting homes," said Don Westover, fire program leader with the Nebraska Forest Service. "The main consideration is that a prescribed fire not become a wildfire. So prescription managers know to err on the side of caution.”

Safety is every firefighter's concern on the training exchange and especially for Dye who is the burn’s plan chief. Every night, he writes the incident action plan or IAP for the next day’s work. It’s a thick document that lists things like the burn’s objectives, a weather forecast, each crew member’s assignment, and a "go/no go" checklist. Everything on the checklist has to be checked “yes before we can light fire,” Dye said.

The IAP is a handbook, schedule, and manual all in one for the firefighters to refer to throughout the day. It cuts down on the chance someone will accidentally start a fire when they’re not supposed to.

Dye has worked on grassland burns before, but not all the firefighters here have. Ashley Whitworth, a firefighter at the Colorado Springs Fire Department, is one of those who hasn't been in this situation.

“I’ve only done ditch burning and a few prescribed fires, but not 700 acres,” Whitworth said.

The training also includes firefighters from Nebraska, Idaho, Minnesota, Utah, California, and even Spain. Jose Luis Duce works for the Ministry of Environment in Spain and is one of 12 firefighters from the country visiting. He has also never worked on a prescribed fire. Spain doesn’t use them as a grassland management tool.

“We have this fuel in Spain but we don’t burn that much in Spain in this kind of fuel,” Duce said.

Fuel, to firefighters, means anything that will burn. In this case, Duce means grass. Spain’s grasslands evolved with fire, like Nebraska’s. But, also like Nebraska, wildfire spreads easily in Spain, especially on dry, windy days. In July 2009, those factors led to wildfires across Europe, from Spain to Turkey, leading to eight deaths and hundreds of people evacuating their homes. 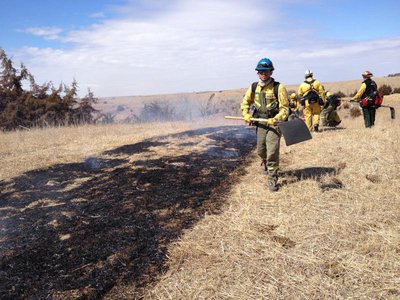 Jose Luis Duce, from Spain's Ministry of Environment, is one of 12 Spanish firefighters who traveled to Nebraska to learn how to administer a prescribed fire. (Photo by Jackie Sojico, NET News)

Duce thinks that’s why people are so reluctant to use fire as a management tool. “People only see the bad side of fire. It’s a part of the ecosystem. People don’t consider usually fire as a natural tool,” Duce said.

Once the crew finishes black lining, the firefighters head back to the command post to get some sleep. Except for Dye. He’ll be working on tomorrow's burn plan late into the night.

Dye’s willing to spend so much time on it because it’s the only way to make sure the burn stays safe for everyone involved, from the firefighters to the landowners. Duce says it’s those kinds of procedures that drew him to this training, all the way from Spain.

“We want to come here and so we can take that learning back to Spain and try to show how we can do it in the same way,” Duce said.

Watch a timelapse video of part of the prescribed burn on the Loup River. (Video courtesy Ben Wheeler.)