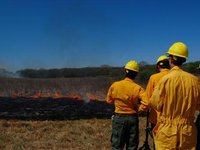 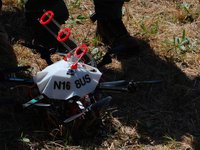 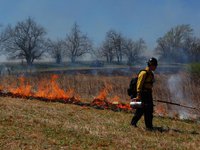 You’ve heard about drones – unmanned aircraft – being used for everything from military attacks to documentary filming. Now, the University of Nebraska-Lincoln is designing one to light fires, in a way that helps protect people and the environment.

On a warm spring morning, a burn crew dressed in yellow and green flame-resistant clothing gets ready to set 26 acres of tallgrass prairie on fire. 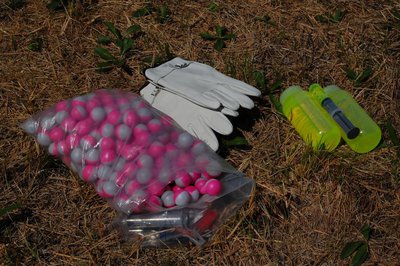 Below, the drone team fills the drone's reservoir with glycol. Once airborne, the drone injects each ping-pong ball with the fluid before dropping it. The resulting chemical reaction sets the ball aflame. (Photos by Ariana Brocious, NET News). 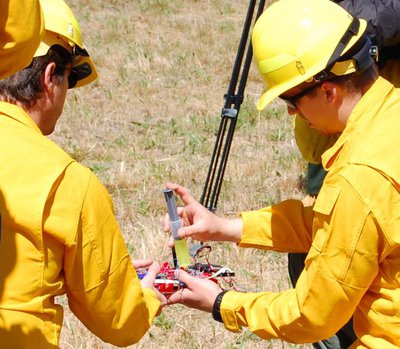 Fire is one tool the agency uses for prairie health. But today’s burn is special because a team from the University of Nebraska-Lincoln is trying out a new tool: a fire-starting drone.

“Introducing this technology is an important step forward for us in testing new methods to work, not only prescribed fires but really, wildland fires,” Engler said.

The burn team starts lighting the edge of the prairie with drip torches—basically big gas cans with a wick. As firefighters walk along the growing flames, UNL computer science professor Sebastian Elbaum gets the drone ready to launch. He described the burn plan:

“Once they build this horseshoe shape black area [of burned grass], we’re going to have our drones there fly across this field and drop some of these balls that will ignite into flame,” Elbaum said. The idea is to “help them perform the task that [the firefighters] right at the center are performing right now, which can get risky if the wind changes or if they get caught up in there.”

The first-ever test on public lands took place at the Homestead National Monument in Beatrice, Nebraska, on April 22, 2016.

Once the drone is airborne, it injects powder-filled ping-pong balls with glycol, then drops them into the unburned area in the middle of the field. In less than a minute, the chemical reaction inside sets the balls on fire. UNL’s NIMBUS lab adapted this firefighting technology—already used with helicopters—to work on a drone.

“Fire has been historically so important to keeping our prairies healthy, and managing for the biological diversity that is endemic to Nebraska and elsewhere in the Great Plains,” said Dirac Twidwell, a UNL agronomy and horticulture professor who studies fire ecology and is part of the drone development team.

“Our grassland species are becoming increasingly more rare and threatened; we’re starting to see more endangered species pop up. We have an 80 percent loss of livestock productivity on our native rangelands, when we see things like cedar overtake them,” Twidwell said.

Getting rid of cedar trees is why Gothenburg farmer and rancher Mark Alberts started burning his land 15 years ago. He’s burn boss for the Central Platte Rangeland Alliance, a collection of landowners that help each other burn fields and pastures. His group does big prescribed burns—800 acres on average—often in cedar-filled canyon country.

Alberts says he’d definitely be interested in using a drone in those rugged areas normally set aflame by guys carrying drip torches on foot or riding ATVs. Landowner burn groups like his have grown across the state in the last 15 years, and Alberts says safety is paramount.

“The drones being able to drop fire in those inaccessible areas…it’s much safer,” he said.

Other farmers that burn small, flat fields say they don’t see a need for the technology. But Alberts says he’s interested in using the drone as a camera, too.

ATVs are a very common tool for prescribed fires, but can be dangerous. (Photo by Ariana Brocious, NET News)

Casey McCoy, acting fire program leader for the Nebraska Forest Service, said he thinks the drone has a lot of potential. “It stands to improve the safety of prescribed fire,” he said, which could save lives.

“We've had a fairly challenging track record here in Nebraska the last several years, five to six years, we've had a number of fatalities associated with prescribed fires,” McCoy said.

In addition to seeing a fire from the sky, McCoy says he could see potential for using a drone to drop flame retardant in fighting wildfires. He says cost and expertise might limit the use of drones to agencies like his own at first, partly because not everyone supports the use of fire.

“In Nebraska prescribed fire is still relatively a new topic,” McCoy said. “There’s a mindset to work on, that fire's bad. We know that fire's not always bad, the landscape, the environment needs fire, and it will be there whether we put it there or it does it when it wants to.”

Back at Homestead National Monument, Carrick Detweiler of UNL’s NIMBUS lab says the prescribed burn was a success. They’ll use what they learned today to keep improving the drone technology.

“We're interested to develop this in the future to be more adaptive and autonomous where, if it's flying in an area that's perhaps getting too hot, it could actually inform the operator to go around the area,” Detweiler said.

This won’t remove the need for human firefighters, and burn bosses say they’d invest in other equipment—like water tenders—before a drone. These drones won’t be on the market for another year or two, but may become part of a firefighter’s—or rancher’s—toolkit in the future.