The U.S. Department of Agriculture says people with mental health disabilities are the least likely to know where their next meal is coming from. Federal food aid helps, but navigating social safety net programs can be a challenge.

It’s a challenge for people with severe mental illnesses to hold down a job or get the medical help they need. And that extends to when they try to alleviate hunger by getting on the federal Supplemental Nutrition Assistance Program, or SNAP.

“(The mentally ill) have some of the highest food insecurity rates in this country,” said Craig Gunderson, a University of Illinois professor who researchers hunger and food programs like SNAP. “And this holds even after controlling for income, controlling for employment status, controlling for a whole bunch of other factors is still those with disabilities including mental health issues have substantially higher rates of food insecurity.”

He wants to figure out whether mental health problems, such as depression or chronic anxiety, are causing people to go hungry, or if it’s the other way around.

“So one of the areas that we’re working on is trying to figure out, you know, which way the causality goes and how it differs,” he said.

If the mentally ill are lucky, they have a friend in someone like Dylan Prendergast, a senior benefits and entitlements specialist at Heartland Alliance Health in Chicago. Basically, he helps those with severe mental illness navigate SNAP, Medicaid, Medicare and Social Security.

One of his clients is a homeless woman with severe mental illness who almost lost her SNAP benefits in 2016. She was supposed to comply with work or training requirements to stay on SNAP because she was considered an able-bodied adult without children.

But, she wasn’t able-bodied. She couldn’t work. To stay on SNAP, Prendergast said, she needed to prove her illness with a note from a doctor or psychologist.

“A provider can’t fill that out for somebody if they haven’t seen them for a while,” Prendergast says. “They have to have an established relationship with somebody. Treating them over a period of time to be able to realistically say that this is why they can and can’t work.” 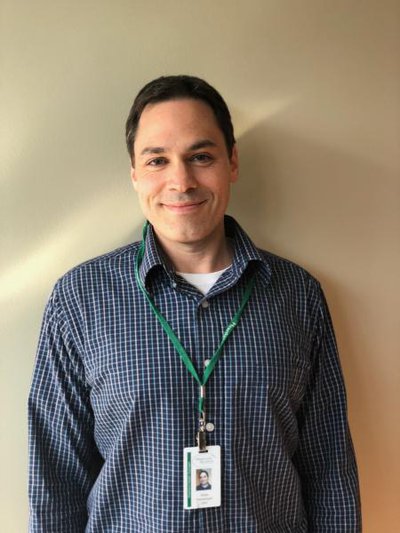 Dylan Prendergast is a senior benefits and entitlements specialist at Heartland Alliance Health. He mainly works with clients on Medicaid, Medicare and Social Security, but helps out with SNAP if there is a difficult situation. In the last few years, he said he helped three people with mental illnesses who could have lost their SNAP benefits. (Photo courtesy Dylan Prendergast)

When the woman obtained that proof, she was supposed to go to a state office to talk with a professional, give her the doctor’s note and keep her SNAP benefits.

“She was not going to be able to handle it, to focus, to stay on task. So, that was particularly difficult,” he said. So, he went to the office for her with a written consent form and an explanation of why she couldn’t come.

He said that for the severely mentally ill, an aversion to state offices isn’t unusual: “Some people suffer from paranoia, hallucinations, panic attacks in crowded areas.”

The SNAP work provisions are currently waived in Chicago and in every area except for DuPage County in Illinois. That’s because every other county proved there weren’t enough jobs as the waiver stipulates.

There are waivers is several other states, too, but 17 states don’t have one at all and 28 only have them in certain areas. (To read more about work requirements, read this story from Harvest Public Media’s SNAP series.)

Recently, the state of Illinois has closed several Family and Community Resource Centers, which help disseminate SNAP benefits for the mentally ill. This was partially due to a state budget crisis and also due to consolidation of rural clinics.

Currently, there are 74 statewide, down a dozen from five years ago. And in 2012, Mayor Rahm Emanuel closed six of 12 clinics in Chicago.

“Our mayor closed half” of them, said Diane Doherty, the executive director of the Illinois Hunger Coalition.

But outside the city, the problem isn’t just access, its the stigma connected to seeking welfare aid and help for mental illness.

“People are really embarrassed,” she said.

Because of this, her organization does work out of Williamson County in southern Illinois, specifically going to public places to talk with people about SNAP.

“Folks that have the least amount of insight into their problems are really the people that need treatment the most,” Doherty said. 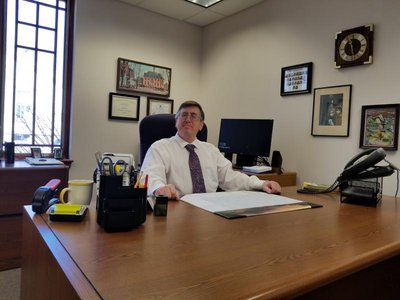 Dave Natof is a case worker at the Galesburg Office of General Assistance in Galesburg, Illinois. He works with many clients who suffer from a mental illness to connect them with services and get vouchers to pay for essentials like utilities and rent. (Photo by Madelyn Beck, Harvest Public Media)

Getting people on SNAP helps beyond just food: It gives agencies like the Galesburg Office of General Assistance a chance to help the mentally ill regain electricity or even find a place to live.

Caseworker Dave Natof mainly helps adults without dependents access vouchers to pay for necessities. And he sees mental illness all the time.

“Just about everybody that comes into our office, or a vast majority, carry with them some level of mental health illness,” he said. “And it’s not a big surprise. I mean we’re a welfare agency. So we are the place of last resort. We are a safety net of support.”

He says some people who may not have had a mental illness before may even develop one under the extreme pressure of losing a job, trying to figure out what to do while at home or stressing about how to pay for lights and heat.

Because of that, he says it’s necessary for mentally ill people who find it hard to keep appointments or even get out of bed to have access to programs like SNAP. If they can get food, he said, his office can help with the other necessities.

“I mean, we’re talking Maslow’s hierarchy of needs. The need for safety, security, the need for basic necessities, food being one,” he says.

There’s a possible solution that some experts like the University of Illinois’ Gunderson are pushing: Changing the recertification process for SNAP recipients.

Once or twice a year, people on SNAP have to prove they still qualify. And at that point, Gunderson said, a lot of people drop off “not because their income is higher, not because they’re no longer eligible — it’s just another hurdle that’s being put in front of them.”

Gunderson points out that the mentally ill move around a lot, and many are homeless, so it’s difficult to get a hold of them to tell them they should even recertify.

The state of Illinois has tried to make recertification easier, but that system, called Manage My Case, has had some issues. When the recertification part of this site launched on Oct. 2017, more than 40,000 households were temporarily kicked off SNAP. And it’s still difficult to get into the system if you don’t have sufficient work history, which many people with mental illness don’t have.

Only 112,000 people have have used the system to recertify benefits (about 5 percent of Illinois’ SNAP recipients), according to the state Department of Human Services.

Prendergast said he helps clients through that system all the time, and even if they have enough work history, the questions asked to verify someone’s identity can be overwhelming.

“People who suffer from paranoia sometimes just want to stop because they think that someone is trying to get their information and use it or somebody,” he said.

Outside of improving the online system, Prendergast said he’d like to see people with severe mental illnesses being able to skip recertification altogether, especially if they already meet the strict requirements to get Social Security disability benefits.

“They could maybe just auto-redetermine them or you know, not have them come in for an interview or necessarily fill out any forms,” he said.

There are no federal or state breakdowns of how many mentally ill people are on SNAP due to the fact that such illnesses can vary and many many people don’t claim to have one. But experts all agree that this segment of the population needs all the help they can get so they don’t go hungry.

This story is part of Harvest Public Media’s series about the Supplemental Nutrition Assistance Program.