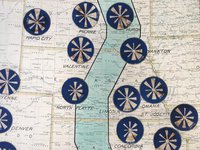 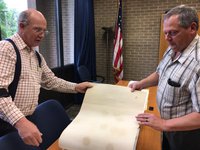 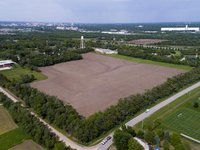 One of the biggest New Deal projects of the 1930s took the form of a giant landscape planning project across the Great Plains. Today we explore the history of the Prairie States Forestry Project.

Anyone who’s lived on a Nebraska farm or ranch or driven across the plains knows what a windbreak is—rows of trees planted in orderly lines, often around homes or fields. But you may not know that many of those windbreaks go back nearly 100 years, to a time when the Great Plains was being ravaged by blizzards of topsoil in the 1930s.

“It really was a response, and a major one, to the Dust Bowl,” says Rich Straight of the National Agroforestry Center in Lincoln. Years of intensive farming and a long period of drought combined to produce one of the hardest times for the region.

“At the same time we had the Depression and the Dirty Thirties—just a double whammy if you lived out in this part of the country,” Straight says.

In 1933, President Franklin Delano Roosevelt started a series of New Deal programs to lift the country out of the Great Depression. One of those -- the Prairie States Forestry Project -- was targeted at two major challenges: unemployment and wind erosion.

“It was an effort to address both environmental and societal issues,” Straight says.

FDR—who planted hundreds of thousands of trees on his own estate—had a deep interest in forestry. He envisioned planting a great wall of trees 100 miles wide down the middle of the country, from Canada to Texas. 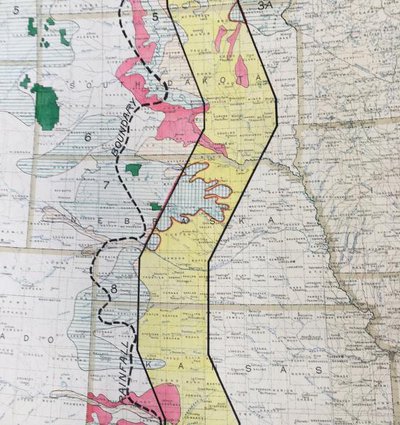 A 1935 map from the National Agroforestry Center archives showing the proposed planting area for the Prairie States Forestry Project.

“There were plenty of naysayers about this whole project, before, during and after,” Straight says.

“There was controversy within the forestry community at large on whether or not trees should grow or could grow in the Great Plains, and then what species should or could be planted,” Sarah Thomas Karle says.

In addition to controversy among scientists, Karle says some politicians had trouble backing a long-term program with short-term drought relief funds. Still, the project went ahead—partly because farmers wanted it, says Karle. Its final cost was less than $14 million.

“It's a national project but there is considerable local buy-in. So it wasn't necessarily a top-down project. So we're not looking at this massive project done on public land. It's actually all done on private property,” she says.

In the span of about seven years, foresters, Civilian Conservation Corps and Works Progress Administration crews planted more than 200 million trees across six states. Rich Straight says it was the largest tree-planting program on the Great Plains. Most counties in Nebraska participated.

“Was it as successful as they wanted? No, it wasn't the solid green wall that they had envisioned. You can't even link continuous windbreaks from the north to south. But it certainly did have a significant impact on the region, on society,” he says.

Richard Carman, research technician at the National Agroforestry Center, has been working for years to compare historic planting records with aerial data of windbreaks today. He helped the Karles with their research. Of the more than 10,000 original planting sites in Nebraska, more than 40 percent remain fully intact.

“I think the assumption is that a lot of the belts are gone, but the reality is they're still there, they're just not as wide as they originally were,” Sarah Thomas Karle says.

Among those records Carman found handwritten accounts, like this one from Buffalo County:

“‘A windstorm caused $100 damage to an unprotected building on this farm. Considerable more damage could have been experienced if the rest of the farm buildings had not been protected by a windbreak.’ They understood the value of the windbreaks even before a lot of them were planted,” Carman says. 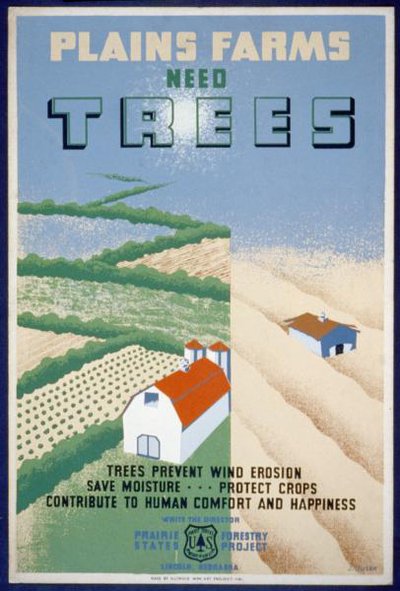 A federal art project poster from 1940 created by artist Joseph Dusek encouraging planting trees as a method of soil conservation.

Bruce Wight, former national agroforester for the Natural Resources Conservation Service, says windbreaks remain a useful conservation tool on the Great Plains, one that NRCS and other groups help producers design and find funding for. Wight says soil conservationists learned a lot from the program—including that the windbreaks planted in the 30s were often much wider than necessary.

“What the Prairie States Forestry Project taught us more than anything is how you can be successful in planting trees in situations where you have a semi-arid climate,” Wight says.

But as farming and soil conservation methods improved, the use and perceptions of windbreaks changed. Wight says windbreaks remain popular around farmsteads and for livestock. But across Nebraska, many farmers have removed field windbreaks—to make more room for crops and because they can interfere with center pivot irrigation and other farming machinery.

“I think landowners view [windbreaks] differently today than in the 30s and early 50s and 60s. Technology has changed and farming has changed a lot,” Wight says.

Farmers today may rely more on no-till and cover crops than planting windbreaks – which take time and money to establish and maintain.

“The success of the project is the longevity of the shelterbelts, which are now starting to decline if they haven’t already been removed,” says Sarah Thomas Karle. "So that’s the next question: what’s next for these landscape systems?”

“And how can we learn from the past experiences of an environmental, social and economic resiliency strategy that works at the scale of a region or territory?” David Karle says.

Last week, a landowner tore out the first windbreak planted in Nebraska under the Prairie States Forestry Project, near the small town of Orchard, in Antelope County. Many locals were dismayed, because while the trees serve a conservation purpose, they’re a big part of Nebraska’s agricultural history, too.