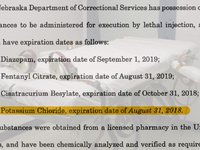 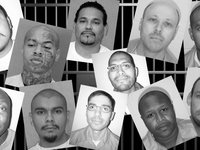 Nebraska’s first execution in nearly 40 years could be scheduled as early as mid-July.

The Motion to Expedite

However, the clock is ticking on an expiration date for the supply of available drugs.

Here a run-down of recent development concerning the death penalty in Nebraska and the prospects for the first use of lethal injection in the state’s history.

After years of delays, the state of Nebraska is again attempting to schedule an execution. What has changed?

The short answer has two parts.

December 3, 1997: Robert Williams is the last person to be executed in Nebraska using the electric chair.

January 24, 2010: Pharmaceutical company Hospira, the only U.S. based maker of sodium pentathol, announces it will no longer sell the drug for use as a lethal injection drug.

January 21, 2011: Corrections announces it is “prepared to carry out…executions.”

April 2011: U.S. Drug Enforcement Administration informs corrections officials they did not have a license to import drug and it can not be used in executions.

May 25, 2011: Moore execution postponed as Nebraska Supreme Court considers whether the source of lethal injection drugs should be considered.

May 27, 2015: The Nebraska Legislature removes the death penalty from state law.

November 8, 2016: In a referendum supported by Ricketts, 60 percent of Nebraska voters elect to keep the death penalty and lethal injection as state law.

November 9, 2017: Attorney general informs Jose Sandoval has pharmaceuticals for use in a four-drug protocol.

May 24, 2018: Attorney general requests the Nebraska Supreme Court expedite setting a July execution date for Moore. One of the four drugs cannot be used past August.

In the summer of 1979 Carey Dean Moore, 22, robbed and killed two cab drivers within a week in Omaha. The crimes had been planned in advance. Moore confessed, waived trial by jury, offered no evidence in his own defense and was found guilty by a judge in 1980.

With nearly four decades in prison, no person in the state’s history has spent more time on death row.

Moore indicated he will make no additional legal challenges in order to interfere with the state’s efforts to carry out his execution. He dismissed his attorneys. That leaves the next step up to the Nebraska Supreme Court to issue the formal death warrant which will set a date. The attorney general requested they speed up their decision.

What about the drugs? Is Nebraska ready for lethal injection?

The request to expedite Moore’s execution included an affidavit from Scott Frakes, the director of the Department of Correctional Services. He claims NDCS “has possession of the substances to be administered for the execution by lethal injection.”

One item in the affidavit speaks to the state’s urgency, noting its supply of potassium chloride will expire at the end of August 2018. It is the final drug in the process and the most critical. Finding additional supplies could be a challenge.

Pfizer, the company who manufactures and sells two of those drugs, last year demanded Nebraska return the drugs they sold to the state, claiming they were never intended to be used to cause the death of a person. According to the Omaha World Herald, neither NDCS or the drug company would say if the drugs were returned. However it would appear Pfizer is out of the picture for now, since in the Frakes affidavit NDCS noted the substances “were obtained from a licensed pharmacy in the United States.” During court testimony on another matter Frakes said all the drugs came from a single source.

The state has provided limited information about the origin of the drugs and the process used to obtain them.

In May 2018 the ACLU, the Omaha World-Herald and the Lincoln Journal-Star were in court arguing NDCS violated state open records laws by withholding information about where the drugs originated, the chemical analysis of the substances, and any communication between prison officials and the Federal Food and Drug Administration about procedures used to obtain them.

Attorneys representing corrections argued releasing the information could be used by opponents of capital punishment to subvert the process. On the witness stand, director Frakes testified he had concerns the documents could lead to the identification of members of the execution team, even if that information was blacked-out of documents released publicly.

Lancaster District Judge Jodi Nelson is expected to rule on that case any day.

What drugs are involved in Nebraska’s form of execution by lethal injection?

The protocol revealed by the Nebraska Department of Correctional Services (NDCS) in November 2017 uses a sequence of four drugs in the specially-designed room at the Nebraska State Penitentiary.

There is no record of executions ever having been carried out anywhere in the United States using this specific combination of drugs.

The prison system in the state of Nevada developed this drug cocktail. Objections raised by the man scheduled to be the first to die using the procedure were rejected earlier in the month by the Nevada State Supreme Court.

Death penalty opponents have continued concerns about the drug which brings on paralysis, fearing if something was amiss and the substances resulted in “tortuous pain” the paralysis would make the subject unable to respond.

What about Jose Sandoval, the other inmate who received a notification from the state that it was prepared to proceed with an execution?

The state could take the next step and request a death warrant for Sandoval from the Nebraska Supreme Court at any time. However, it appears Moore is currently the only priority for state officials in light of his decision to dismiss the attorneys who could file the most effective and immediate legal objections.

As with Moore, the Nebraska attorney general sent Sandoval a letter saying the death drugs were on hand. The notice is the first step in a process the state must follow to advance the execution of a person convicted of capital murder.

Sandoval is one of three men on death row convicted of murdering five people during a 2002 bank robbery in Norfolk. In November 2017 the attorney general selected Sandoval to advance as a candidate for execution. At the time he did not have appeals pending. After the state gave notice of its intent, Sandoval filed a new appeal. The filing in Madison County District Court claimed the state legislature altered the death sentences at the time of its historic vote to end capital punishment, nullifying the results of a later referendum election. The judge threw out that case before it even got to trial.

What is the status of the most recent cases qualifying for the death penalty?

Three murderers have been or are likely to be added to death row within days.

In May 2017 Nikko Jenkins was sentenced to death for murdering four people in what the presiding judge referred to as “one of the worst killing sprees in the history of this state.” The murders all took place in Omaha over a ten-day period. He is still entitled to a review of the sentence, as required by law, before the Nebraska Supreme Court.

Two others have been convicted, awaiting word on their sentence.

Garcia is scheduled to be in court June 13 for his sentencing hearing before a three-judge panel. The hearing, delayed for months because of a bizarre turn of events involving his past attorneys, can finally proceed with representation provided by the state’s Commission on Public Advocacy.

The Garcia murder case got national attention, including episodes on both Dateline NBC and the ABC series 20/20.

Garcia was a doctor who killed four people associated with colleagues at the Creighton University School of Medicine. Victims included the housekeeper and 11-year old son of one physician and on a separate occasion, a physician and his wife. According to court testimony, these were revenge killings.

The sentencing hearing structured in state law is designed to help the panel of judges identify what makes this case worthy of the use of capital punishment and what circumstances, such as mental illness, might rule out use of the death penalty.

Schroder appeared before a judicial panel in Johnson County in mid-April. The decision by the three judges is scheduled to be released Friday afternoon.

He elected to, like Moore, dismiss his defense attorneys and, he insists, will not attempt to block his own execution.

Schroeder killed his cellmate at the Tecumseh Correctional Facility and was already sentenced to life in prison for killing a 75-year old farmer outside of Pawnee City.

What other legal challenges could interfere with advancing an execution?

The American Civil Liberties Union filed the lawsuit on behalf of two death penalty opponents, including Senator Ernie Chambers, which claims state officials created the protocol used in the execution process in a manner that was hasty and not in keeping with proper administrative procedures.

The lawyers for the state argued the death penalty opponents are not the ones who can sue, that it’s only the inmates themselves who can raise objections about the process.

There is a motion by the state to throw the case out even before it goes to trial. The Lancaster County District Court judge hearing the case is still reviewing that motion.

(EDITORS NOTE: An earlier version of this story inaccurately reported the sentencing hearing for Anthony Garcia was scheduled for May 30. It had been rescheduled by the court to June 13.)