Solar power is a growing industry in Nebraska, and increasingly farms and ranches are adding solar to their operations.

In these hot days of summer, it’s easy to appreciate just how much sunlight we get in Nebraska. A growing number of people and communities across the state are starting to take advantage of this resource.

“2016 was, in total, a very significant year,” said David Bracht of the Nebraska Energy Office. In the last 18 months, Nebraska’s total solar power generation has grown from around one megawatt to around 13 megawatts. While that’s a big increase, we’re still talking fairly small potatoes when it comes to energy.

“If we took all the solar that we have today in the state, it would be less than 10 wind turbines,” Bracht said, adding that the continuing interest in solar has driven more competition, improving technology and driving down costs. That doesn’t mean it’s not still expensive, but “the price of a solar project has declined by over 80 percent in the last 7 years,” Bracht said. “Very few things you can think of have declined like that.”

Utilities and communities have built larger solar projects in places like Lincoln, South Sioux City, Central City, Venango and Scottsbluff. And across the state, homeowners, businesses, farms and ranches are installing small-scale projects of their own. Jim Jenkins owns a diversified ranching/farming operation between Callaway and Broken Bow. His family homesteaded the place in 1876.

“In fact the first Custer County courthouse was located on the ranch where the solar site is,” Jenkins said.

At the end of 2015, Jenkins installed a 25 kilowatt project—100 solar panels—on his pasture. It provides electricity for his shop area, including some grain storage and cattle feeding facilities. Jenkins said he’s been interested in renewable energy since college and the economics of solar just made sense.

“It's going to cut our utility bill by $3,500 and obviously if your utilities go up you're going to save more,” he said.

To fund his $75,000 project, he applied for and received a grant under the USDA’s Rural Energy for America Program, which covered about a quarter of the costs. He also got a low-interest loan, and took advantage of the federal solar investment tax credit and depreciation tax credits. He estimates the whole project—which has a life expectancy of 20 to 25 years—will be paid off in six to eight years.

“Once you have your return you're effectively putting that money in your pocket,” he said. 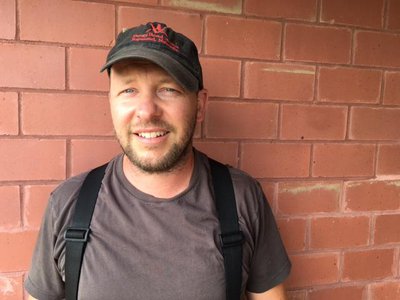 Ben Gotschall of Davey Road Ranch will be installing an 8.8 kilowatt solar project in a few weeks.

Jenkins has one of the smaller projects in Custer County. Other farmers and ranchers have installed systems up to 600 kilowatts. Jenkins said he thinks some of the interest in solar stems from boom years when commodity prices were high, and the ability to take advantage of tax deductions while diversifying a farm’s cash flow. Farmers and ranchers also say the ability to lock in a long-term cost, particularly with low-maintenance equipment, is appealing.

“Farms and ranches use a lot of electricity and to be able to generate some if not all of that electricity yourself makes sense,” said Ben Gotschall of Davey Road Ranch. He also operates Branched Oak Farm in Raymond, north of Lincoln. He’s planning to install an 8.8 kilowatt solar project on his farm in a few weeks.

“Being an organic farm here, we kind of have an ethic that we want to keep our soil clean, keep our water clean. We don't use any chemicals, pesticides, herbicides, things like that,” Gotschall said. “So it just kind of jives more with our world view, so to speak. But it does make business sense.”

Gotschall, who’s also part owner in a local food supplier business, recently installed a refrigerated trailer for cold storage. His solar project will supply all his power needs, of which the majority is the cold storage, he said. “That [refrigeration] unit pulls a lot of juice.”

He’s wanted to install solar for years, but didn’t want to make the investment until he owned his own ranch. He took advantage of a federal low-interest loan for beginning farmers through USDA, which also helped him finance the solar. Combined with the income he earns renting his cold storage space, he thinks the solar will pay for itself.

“More and more Nebraskans are starting to understand the benefits of solar,” said Graham Christensen, president of GC ReVOLT, a Nebraska renewable energy development company. In the last couple years he’s worked mostly with farmers and ranchers to help them install solar projects.

“In rural areas, it's a small tight-knit community, so when one farmer puts this up, a lot of times they share the information with others,” Christensen said. “And you can easily see the dollars dropping off your electric bill. And the word gets around.”

But Christensen said some of the incentives for solar may be changing—including grants through the USDA’s Rural Energy for America Program, which helps fund renewable energy and energy efficiency projects. Since 2003, Nebraska has funded nearly 1300 such projects, and there’s been increasing interest in renewable energy. But President Donald Trump’s May budget proposed heavy cuts to the USDA and rural development.

“It's a very, very valuable program and we want to be able to maintain it,” Christensen said.

Still, Christensen is excited by the momentum in Nebraska’s solar industry, and said improving technology, like lithium ion batteries, will only further solar’s potential in the future.