Food stamps are being targeted for cuts as Congress debates a new farm bill. 47 million Americans are enrolled in SNAP, including 1 out of 10 Nebraskans. Most of the money goes to grocery stores, but an increasing amount is spent at farmers markets.

April Segura is a regular at the Old Cheney Road Farmers Market in Lincoln. On a warm, May afternoon the single, stay-at-home mother of three greeted friends and acquaintances while strolling past tables of lettuce and herbs. She hoped to find more asparagus for sale.

“I love asparagus season and it’s probably about to be over,” said Segura holding two grocery bags with one arm and her one-year-old son, Jeriel, with the other. “I didn’t get any last week because we were in a hurry and barely made it here.” 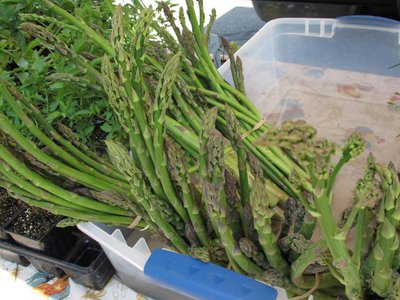 These markets in Nebraska currently accept SNAP according to the most recent list from the U.S. Department of Agriculture:

Segura is a local food fanatic and a SNAP (Supplemental Nutrition Assistance Program) recipient. She depends on around $500 each month in benefits to help cover the cost of food. As much as she can, Segura uses that money at the farmers market to buy food that would otherwise be hard to afford.

“I wouldn’t want to just get crap food,” Segura said. “For me and my kids I realize we need to be eating healthy and we try to eat as organic as we can and local as we can.”

It used to be common for markets to take food stamps. But when paper stamps were replaced by plastic debit cards beginning in the mid-1990s, not many markets invested in card readers.

In recent years, however, there has been a rebound. In 2008, only 753 local farms and farmers markets across the country accepted SNAP. Last year it was 3,214. Customers like Segura pushed SNAP spending at farms and markets to more than $16 million in 2012.

But that’s hardly a drop in the bucket when you consider government spending on SNAP reached $78 billion last year, more than double pre-recession levels.

The current debate in Congress is not whether to cut SNAP, but by how much. Right now, states can automatically enroll people in SNAP if they qualify for other social programs, like heating or cash assistance. The House and Senate are each considering plans that would save money by rolling those policies back, but to different degrees.

The farm bill in the Democrat-controlled Senate would trim an estimated $4 billion over 10 years. For many Republicans, like Sen. James Inhofe of Oklahoma, that’s not enough.

“Why would they call this a farm bill if 80 percent of it is talking about the food stamp program?” Inhofe asked on the Senate floor. “I can’t think of anyone who could rationally say that this program of food stamps could justify being increased by 100 percent in a period of four years.”

Meanwhile, a different version of the farm bill in the Republican-controlled House of Representatives would cut SNAP by $20 billion. Many Democrats, including Rep. Jim McGovern of Massachusetts, argue that’s unnecessary because SNAP spending would fall on its own.

“When the economy gets better and people go back to work the numbers decline,” McGovern told members of the House Ag Committee. “And as this economy improves, and the (Congressional Budget Office) says this, you’ll see fewer and fewer people on SNAP.”

Many states also prefer the current policy because it provides more economic stimulus. According to the U.S. Department of Agriculture, each dollar of SNAP produces $1.79 in economic activity.

Most of that money does not go to farmers markets, however. The vast majority of SNAP dollars enter the economy through large supermarkets and superstores.

Megan Jackson, manager of the Old Cheney Road Farmers Market, acknowledged a dollar may buy more at the grocery store but it’s divided among wholesalers and distributors.

For small growers who don’t receive the same government support as commodity farmers, Jackson said SNAP is like an indirect subsidy. April Segura said that’s one reason she chooses the farmers market.

“You can come to the market and you can support everyone that you know and want to support,” Segura said.

This summer, Congress will argue over how much food assistance the government can afford. In the meantime, a growing number of SNAP users plan to spend as much they can afford at the farmers market.

Choice Cuts: Meat alternatives want a part of your dinner plate
Back from war, on to the farm
Field Notes: What you should know about our food system