Farmers get creative, frugal to stay afloat in tough times

After several boom years while the rest of the economy struggled, farming is entering its third straight year on the bust side of the cycle. Prices for corn and soybeans are low while expenses like seed, fertilizer and land remain stubbornly high.

David Muth is a founder and vice president of AgSolver, in Ames, Iowa, one of many data-driven start-ups promising to make farms more efficient.

“We like to look at farming [as], we build commodities. And every individual acre's a unique production facility,” Muth said.

His company breaks down a farm operation into individual one-acre datasets.

Muth compares one of those to a single store in a chain of coffee shops. Some locations are profitable, others not so much.

“The question we like to ask is,” he says, “would we be satisfied if any one of those individual production facilities is operating at a loss?”

Probably not, Muth says. So what do you do with the coffee shops that are losing money? Any business management expert will tell you to do two things: reduce expenses and stop wasting money. Let’s start with that second one. 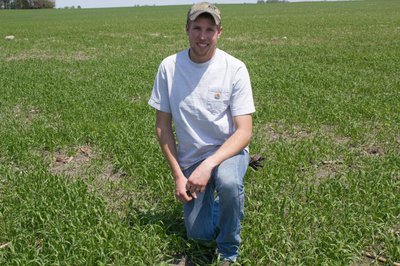 Boone County, Iowa farmer Andrew Heineman has planted 150 acres of oats this year as a bit of an experiment, and a hedge against low corn prices. (Photo by Amy Mayer, Harvest Public Media)

A few miles from Ogden, Iowa, in Boone County, Andrew Heineman stops his old pick up at a bright green field, with shoots taller than any corn at this time. It’s 150 acres of oats. Heineman graduated from Iowa State University in 2013, just in time to return to his family’s farm in time for the agriculture economy to tank.

This year he’s convinced his family to try oats, a crop not seen on this corn-soybean farm in his lifetime. Over the winter, he consulted with one of those data-analysis firms.

“Found out this was one of our lower-profit farms,” he says, “so we’re trying to figure out a way to offset some of the stuff from $3 [per bushel] corn.”

“This would be a great year to try to raise some,” Johnson remembers telling Heineman, “if you’ve got a market.”

Heineman says both the oat grain and straw will potentially be cash crops for him, though he’s still working on some of the details. But harvesting oats in mid-summer, earlier than corn or soybeans, will also free up this field so he and his family can put in some more tile drainage before getting caught up in the harvests. They hope additional drainage will make the field produce more corn in the future.

Now, back to the other business-school lesson: cut costs. After land, seed is the biggest expense on a crop farm. Modern seeds are packed with special traits, often genetically engineered, to protect them from insects or fungus or make them herbicide tolerant. Johnson says in the good years, farmers saw the extra expense for all those traits as cheap insurance. Now he says farmers could cut their seed costs in half if they don’t buy seeds with all the traits.

“Most guys are going to only ratchet back some traits,” Johnson says, “so maybe they’re only going to save 25 percent or 20 percent. But [with] today’s corn [prices], that’s still a pretty good chunk of money.” 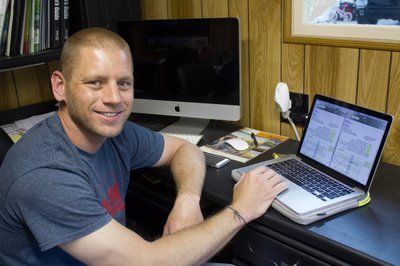 A tool from Iowa State University that calculates the maximum amount of nitrogen that will generate a positive return on a corn crop has helped Ryan Bristle decide to use less nitrogen than he normally would. The data from the calculator helped him convince his dad and uncle of the cost-saving measure. (Photo by Amy Mayer, Harvest Public Media)

That could add up to thousands, maybe tens of thousands of dollars saved.

But farmers tend to be careful about cutting back too much. They want to save money, but they don't want to lose yield.

“You take a little bit of a gamble when you try to reduce some things,” said Ryan Bristle, who help fun the family farm about 20 miles southeast of Heineman. “But we did reduce some of our traits.”

He’s also using a nitrogen calculator that Iowa State has developed. He plugs in his location, the expected corn price and the cost of fertilizer to find out just how much to use. Bristle will apply less than usual this year because a small bump from extra fertilizer won’t generate enough additional corn to pay for itself. But he’s cautious.

“You don't want to do it where it's detrimental to your yield,” he says, “because at the end of the day, yield is still king and that's what's going to drive your return [on investment].”

Here’s one more savings tip: Make do with what you have. Both Bristle and Heineman say they are repairing rather than replacing equipment.

One side benefit of a rough farm economy is that both state and federal officials are seeing more interest in conservation programs. Plus, using less nitrogen on corn or inserting oats into a corn-soybean rotation could both have long-term environmental benefits, though the impact of only one year’s change might not be noticeable.

Heineman farms with his twin, a cousin, uncle and grandfather. He says the older generations are helping him navigate the lousy farm economy.

“They say, ag comes and goes in cycles,” he says. “You just gotta prepare for some of the bad times in the good, and be able to ride it out and come back up.”

That optimism is the hallmark of an entrepreneur, from Silicon Valley to the Iowa prairie.