Farmers gear up for record harvest while bracing for lower prices

Soybeans pile up at a grain elevator outside of Heartwell, Neb. (Photo by Grant Gerlock, NET News/Harvest Public Media) 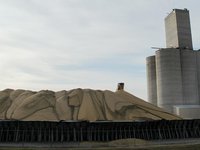 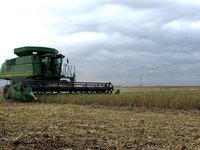 Nebraska Farmers are bringing in what’s expected to be a record-breaking harvest for both corn and soybeans. But all that productivity has a big financial downside. Only two years after peaking, grain prices are at their lowest level since 2009.

But farmers’ collective achievement comes with a big drawback for their personal finances. Corn and soybean prices have been falling for months. 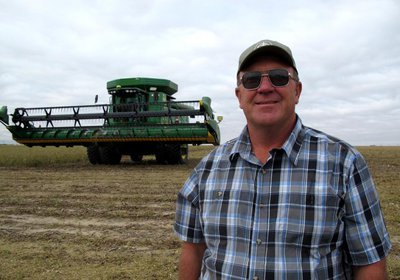 Minden, Neb. farmer Gene Trausch said usually some part of the Corn Belt suffers a weather disaster that hurts yields. Not this time. “Everybody had a good crop this year,” Trausch said. (Photo by Grant Gerlock, NET News/Harvest Public Media) 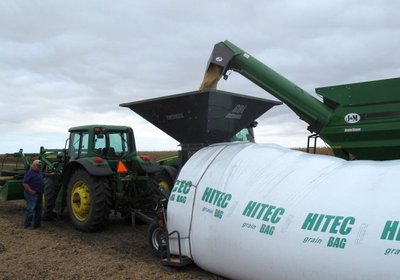 From the cab of his John Deere combine, Gene Trausch watches the machine churn through a field of soybeans. This irrigated field is showing big yields. So did the corn he recently picked. But prices for both crops are far from where they once were.

Grain prices peaked two years ago, during the drought. Corn sold then for 8 dollars a bushel but is selling for less than half that today.

“We out-produced ourselves,” said Trausch, who raises raise corn, soybeans and wheat near Minden in central Nebraska. “You always hope your neighbor burns up, hails out (or) dries up but you have a good crop, but everybody had a good crop this year.”

Prices for corn and beans are at their lowest level since 2009. Farmers like Trausch are responding by holding back as many bushels as possible. Farmers have built tall, steel grain bins to hold their harvest and wait for higher prices. Trausch is filling long, white plastic bags with soybeans instead of trucking them to the local elevator.

“Last year we didn’t hold on to much,” Trausch said. “It all went to town because of the way markets were. But this year we’re going to hold on to just about everything, about 90 percent.”

Trausch said he would earn 30 cents per bushel more on the soybeans in the grain bags by storing them until January. With around 10,000 bushels of soybeans in each bag, Trausch can squeeze out an extra $3,000.

That makes a difference because it’s hard to pay for farming in 2014 on prices from 2009. The cost of farming rose quickly in that short time.

Rising costs and falling prices are a bad combination. Still, Walters said many farmers will have so much grain to sell, they’ll manage to make some money. Others will lean on taxpayer-subsidized crop insurance to stay in the black, or close to it. 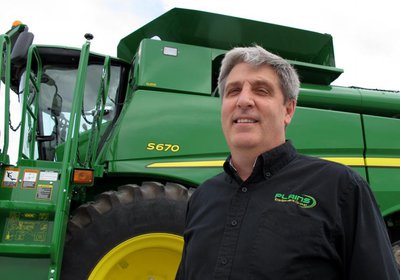 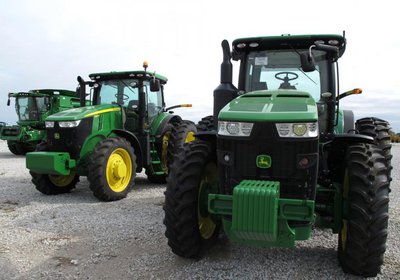 “Does that mean we’re going to have multiple years of low prices and it’s all doom and gloom?” Walters asked. “No. I don’t buy that right now.”

But until prices improve, farmers who had cash to burn a couple years ago are suddenly pinching pennies and it’s already starting to show.

“With the commodity prices they’re just saying they’re just not going to try and do (it). I think they’re going to hold off,” Troester said.

Equipment manufacturers have seen that coming and are cutting costs. John Deere announced more than 1,000 layoffs at factories in Iowa.

Count Minden farmer Gene Trausch as one of those keeping his money on the sideline. Trausch says his farm is on solid ground financially, but he predicts others may not be able to weather a prolonged downturn.

“The ones that did go buy lots of high priced ground, or overextended on new equipment, or if you’re a young guy that just got into farming and just don’t have the resources,” Trausch said.

For them, he hopes things go back up as quickly as they came down.