Farm, Food, Forestry and More On The Table in the Next Federal Farm Bill

In the coming months, Congress will map out how to spend upwards of $500 billion over the next five years in the farm bill. Farmers have certain interests in the negotiations, but the bill has more to do with food than just what happens on the farm.

The massive piece of legislation known as the farm bill affects all taxpayers — whether they know it or not — and runs the gamut from farm safety net and conservation programs to food stamps and loan guarantees for rural hospitals. Since the bill hasn’t been introduced yet, now is the time when interest groups, farmers and others clamor to ensure their desires will be heard.

One of those people is Sarah Gilbert, a dairy farmer in Hardin County, Iowa. In November, she went to Washington, D.C., to lobby for the conservation stewardship and environmental quality incentives programs — both of which deal with land that’s in production.

She also advocated for the beginning farmer and rancher development programs, as she and her husband benefited from mentoring when they were starting out, and, more recently, offered a work opportunity to a newer farmer who under their tutelage learned equipment repair and animal handling. 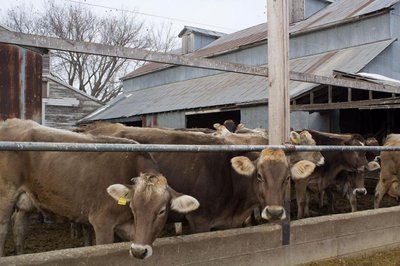 Gilbert, her husband and his parents milk 54 Brown Swiss cows and plant 800 acres in corn and soybeans to feed them. They also have a small herd of hogs. (Photo by Amy Mayer, Harvest Public Media)

Gilbert says when she walked through the metal detectors and into Congressional buildings, she looked around at all the other people who’d come to meet with elected officials and staffers. She remembers feeling both intimidated and inspired, and it dawned on her that everyone else was there to ask for something, too.

“It made you really happy that you were there,” Gilbert says, “because it's like, well, if I wasn't here, who would be asking for this?”

It’s not just farmers who care about the bill, Gilbert says. That’s because everybody eats, and the programs can affect food prices and availability, fund local food and farmers market projects and, especially, assist those who need federal help to put food on the table. About 80 percent of farm bill dollars go to the Supplemental Nutrition Assistance Program, or SNAP.

“Calling it a farm bill is almost a disservice,” Gilbert says, “just because it has that huge nutrition component. And it should just be a food bill.”

Indeed, the phrase “farm bill” is a convenient shorthand for the law, which authorizes most of what the U.S. Department of Agriculture does. Historically, nutrition and agriculture programs have been paired for several reasons, including securing urban lawmakers’ votes for traditional farm supports.

The bill goes both ways

Central Iowa farmer Matt Russell sees the farm bill also as a deal between farmers and other taxpayers throughout the U.S. He uses himself as an example: His farm, Coyote Run, made it through a drought with help from a farm bill disaster relief payment — a component of the farm bill. In return, Russell makes land-use decisions that help clean up water far downstream from where he lives.

“My obligation, then, is to put conservation, and put practices on my farm that have public benefits,” he says. “And then the other really big piece of this is that, as a farmer, I need to be supportive of the SNAP program.”

When a family in need gets SNAP benefits, Russell knows that’s his tax dollars at work. 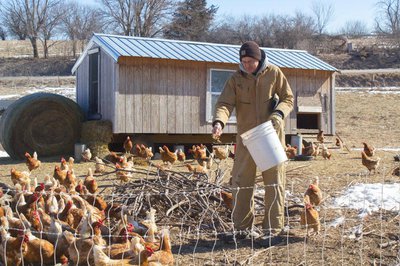 Matt Russell feeds chickens in 2015 on his farm in Iowa, which benefits from some of the programs in the farm bill. (File photo by Amy Mayer, Harvest Public Media)

This is a time of change within the USDA, which employs about 90,000 people and gets about 80 percent of its funding from the farm bill. Russell is concerned about what the restructuring happening within the agency will do to staffing levels and available money; he served eight years on the state Farm Service Agency committee, a politically appointed panel that helps connect farmers to USDA.

“I have some real concerns that, both with budget and with reorganization, that this administration is potentially looking to downsize those supports for farmers,” Russell says, referencing his Obama-era appointment that extended through the end of 2017.

“The big thing that they sought to change was removing the undersecretary for rural development,” he says (that position now is an assistant to the secretary and still oversees rural housing, business and utility services). “And that caused a stir. So they've been pretty quiet about a lot of the changes that they've been making.”

But President Trump’s administration hasn’t been quiet about what it says is its commitment to farmers. The Republican even spoke at the American Farm Bureau Federation annual convention about crop insurance — a controversial safety-net program for farmers. In his budget proposal in May, Trump has suggested caps to crop insurance subsidies, which Congress would have to write into the farm bill.

“I’m looking forward to working with Congress to pass the farm bill on time,” Trump told the audience, “so that it delivers for all of you. And I support a bill that includes crop insurance.”

The current farm bill expires in September, but there’s a long history of extensions and delays when working with the next one: What was meant to be the 2012 farm bill didn’t become law until 2014. That has some farm-policy experts like Clayton suggesting that the legislation at hand could wind up being the 2020 farm bill.