It’s troubling times right now for Midwest farmers. Farm income is down for the fourth-straight year. Prices for the most important crops are down. Some are comparing it to the 1980s Farm Crisis, one of the worst farm depressions in U.S. history.

Of all the expensive machinery Tom Giessel worked during the 2017 wheat harvest, his favorite sits in the office of his home.

It’s a microfilm machine, the kind found in a high school library. Giessel uses it for his work as the historian of the National Farmers Union, the nation’s second-largest farm group.

It’s the best investment he ever made, he says, and it sits in his office where faded bound books of old newspapers are stacked ceiling high and row after row of square white film boxes are packed into a cabinet.

Today’s history lesson: one of the worst farm depressions to ever hit the U.S., which struck during the 1980s.

“I remember in the early ‘80s what happened and how it happened,” Giessel says. “I went back, I’ve done some research, and tried to do some parallels and comparisons.”

In the 1980s, thousands of farmers lost their land, ag banks failed and Main Street businesses in farm country went belly-up. Today, Giessel worries that history is repeating itself. Farmers face tight margins and often are in debt. Farm income has steadily dropped since 2013 because of a global grain glut. 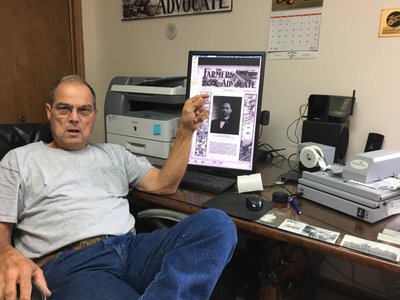 Tom Giessel, a Kansas farmer, sits in his office next to his computerized microfilm reader. Giessel is the unofficial historian of the Kansas Farmers Union and has records dating back to the turn of the century. (Photo by Peggy Lowe, Harvest Public Media)

“There are still piles of grain from last year on the ground and we’re harvesting this year’s crop,” Giessel says. “So what does that tell you about over-supply?”

Fearing the worst, the National Farmers Union in May set up a farm crisis web page with info about loans, mediation, disaster relief and a suicide prevention hotline.

When it comes to the ag economy, however, “crisis” depends on who you ask.

Bill Watson, president of the Agribusiness Division of UMB Bank, a top-20 farm lender based in Kansas City, Missouri, said the term “crisis” is a personal concept that might be true for some but not all.

Farmers accrued massive debt in the ‘80s and interest rates were very high, Watson says, with rates reaching up to 20-plus percent.

Yet he’ll admit that today’s farm income – cut in half since 2013, according to the U.S. Department of Agriculture – means many small farmers have not had a positive cash flow for several years. That could hurt small- or medium-sized farmers who have not reached the break-even point in that span.

David Widmar, an ag economist at Purdue University in Indiana, prefers the term “adjustment” for the current situation. He agrees with Giessel and Watson that farm income is a problem. But he points out that in the ‘80s, farmers were facing tougher seasonsafter exports dried up thanks to the Soviet Union grain embargo.

“Agricultural exports, I wouldn’t say collapsed, but severely pulled back,” Widmar says. “And we haven’t seen at this point a significant drop or pull back in demand to those 1980 levels.”

There are worries, however, about a slide in exports. President Trump pulled the U.S. out of negotiations for the massive Trans-Pacific Partnership trade deal, which likely would have meant billions in ag exports for U.S. businesses. Trump has also proposed renegotiating NAFTA, which sees billions of dollars in U.S. ag exports to Canada and Mexico.

In central Kansas, Tom Giessel, 64, harvested 1,800 acres of wheat earlier this year. He is the fourth generation in his family to farm his land. But if the ag economy continues in what he sees as a crisis for the next few years, Giessel says he fears there will be a lot fewer guys like him in the future.

“I see us running out of money real fast,” he said. “It’s obvious.”