Extra Charge for Plastic Bags, Ownerhip of Eggs for in Vitro Fertilization Among Subjects of Bills

Nebraskans could be charged a nickel per plastic bag when they shop. And women would be declared to own their unfertilized eggs, harvested for in vitro fertilization, under some of the latest bills introduced in the Nebraska Legislature.

If you go to a supermarket or other store and take your groceries home in a plastic bag, you would be charged an extra nickel, under a proposal by Sen. Wendy DeBoer. DeBoer says she got the idea from students at Omaha Northwest High School, and has been noticing all the plastic bags that litter the roadside on I-80 between Omaha and Lincoln.

“As I looked into it more, I learned that it’s dangerous for animals. There’re stories of colts eating them and dying. So yeah, I think it’s a good idea to do something about them and we’ll let the kids lead in exactly the best way according to their research for doing this and see what we come up with,” DeBoer said.

Another youth-inspired measure, this one on climate change, will come before senators as well. Sen. Rick Kolowski says he’ll introduce a resolution calling on the Legislature to recognize that there is an “ecological crisis.” The resolution was brought to him by students from Prairie Hill Learning Center, a Montessori school near Roca, Nebraska. Tela Hamric, a sixth grader at the school, talked about the reasons behind the resolution. 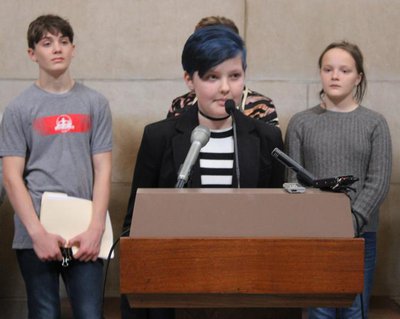 Tela Hamric, flanked by other students, at the Capitol Friday (Photo by Fred Knapp, NET News)

“Hurricanes and wildfires, floods and droughts are getting worse and more common. States are losing billions to clean up after these disasters. Nebraska lost a total of $440 million worth of cattle to the flooding last year. People are being forced to leave their cities, sometimes countries. So my class decided we can no longer sit by and watch people lose their homes, their families, their lives,” Hamric said.

The resolution says a report by the University of Nebraska-Lincoln concluded climate disruptions have decreased agricultural yields in Nebraska over the last 40 years. However, data from UNL’s Cropwatch show yields have substantially increased in recent decades. Average corn yields, for example, have gone from about 87 bushels an acre in 1980 to about 177 in 2017. But Kolowski says the picture is mixed, and is changing.

“It depends on how you look at it from the perspective of where we were, x number of years ago, before we got into some super-breeding hybrids and all the rest, compared to where we are now. We’ve lost some ground on the corn yields because of the flooding and other things that are taking place,” Kolowski said.

On another subject, Sen. Machaela Cavanaugh has introduced legislation to say a woman owns her unfertilized eggs that are harvested for future in vitro fertilization. Cavanaugh says the practice is becoming more common as women decide to postpone having children. She said now, if the woman is married when her eggs are harvested, they are considered jointly owned by her and her spouse. Cavanaugh described a scenario she’s trying to avoid.

“If a young woman -- and she’s married, say 25 (years old) …has her eggs harvested and 10 years later perhaps that marriage doesn’t work out, and it’s a contentious divorce, and there’s a fight over the ownership of the unfertilized eggs, which can happen -- just to prevent that from being part of the marital dissolving. This is trying to create more safeguards for women having ownership over their bodies,” Cavanaugh said.

And Sen. Ernie Chambers introduced a bill adding anti-bias training for law enforcement to a list of steps intended to prevent racial profiling.

“I don’t think that merely giving people courses or lectures about how to treat others is going to change them. But what it does is take away the excuse that they did not know, they did not understand. They did not know that if you call a man by a racial epithet, it would be incendiary. So we’re going to take away excuses and at least make them go through the process,” Chambers said.