Farmers count on chemical herbicides to keep their fields weed-free. But exposure to weed-killing chemicals could come at a cost. Scientists recently looked at two of the most heavily used farm chemical to determine whether they could cause cancer.

In the last few months scientists brought together by the International Agency for Research on Cancer, or IARC, considered glyphosate and 2,4-D.

IARC is part of the World Health Organization. The agency assembles scientific panels to evaluate data on different chemicals and decide if there is evidence they could cause cancer. It has reviewed nearly 1,000 chemicals over the last 50 years and categorized them as causes cancer, probably causes cancer, possibly causes cancer, not classifiable, or non-carcinogenic.

They looked at glyphosate, the active ingredient in Monsanto’s Roundup, and determined it probably could cause cancer. For 2,4-D, which has been on the market since the 1940s, the group said it was possible the chemical could cause cancer.

Environmental groups want regulators in the U.S. to take notice of IARC’s findings. IARC doesn’t regulate herbicides itself, but the agency’s decisions do carry weight. Brazil is taking another look at glyphosate. Glyphosate was already under review by the Environmental Protection Agency. 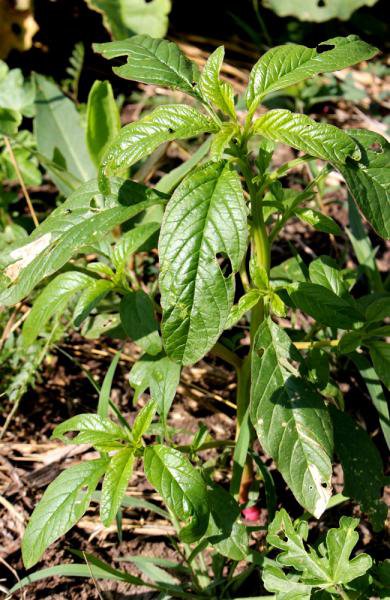 Pigweed has begun to show signs of resistance to herbicides like glyphosate in some Midwestern farm fields. (Photo by Matt Brooks for NET News)

“IARC is the decision-making body to which every regulator around the world looks to,” said Scott Faber, vice president of government affairs for the

Farmers fighting herbicide resistant weeds will likely look to spray more chemicals not less. That’s why Faber says the EPA needs to take IARC’s conclusions into account when deciding how much is safe, both for farmers and their neighbors.

“There are millions of rural residents who use playgrounds and go to school or go to church within the drift zones of corn and soybean fields,” Faber said.

But the EPA doesn’t look at herbicides the same way as IARC. Take the case of 2,4-D. Anneclaire De Roos, an epidemiologist at Drexler University and a member of the 2,4-D group at IARC, says the scientists’ task was only to ask whether a chemical is a potential hazard.

“Is there enough evidence to say that this agent or chemical causes cancer, and if so what types of cancer is there sufficient evidence for,” De Roos said.

At the end of that hazard assessment, scientists concluded 2,4-D is a possible carcinogen. But so are coffee and aloe vera, according to IARC. The EPA’s job is to go beyond that to assess risk, that is, whether it is likely to cause cancer or if there is a safe way to use it in the real world.

“They also try to characterize what is the dose response,” De Roos said. “How much exposure do you need to develop cancer?”

Julie Goodman is a toxicologist and consultant who works with the Industry Task Force on 2,4-D, which is supported by chemical manufacturers. She says 90 government agencies around the world have conducted risk assessments on 2,4-D and found it’s safe to use.

“Farmers or anyone else using or potentially exposed to 2,4-D should really rely on the results of the risk assessments,” Goodman said. “And these risk assessments demonstrate that 2,4-d does not increase cancer risk.”

The herbicide industry is also pushing back against IARC’s classification of glyphosate as a probable carcinogen, Monsanto says it will convene its own panel of scientists to review the science on the chemical.

”Weeds don’t pay the bills.” Nathan Dorn husks an ear of corn on his family's farm in southeast Nebraska where they grow corn and soybeans, but not weeds. (Photo by Matt Brooks for NET News)

Corn and soybean farmers in the U.S. apply more than 300 million pounds of herbicides each year. Those chemicals are an important part of how Nathan Dorn does business.

Dorn farms with his family in southeast Nebraska. On a warm summer morning he walks down a strip of grass between a field of corn and a field of soybeans. He bends down to pull up a green, leafy stalk of pigweed by its roots. He snaps the stalk like celery.

That’s why, before he plants his crop, Dorn sprays the field with a herbicide cocktail. Each acre is sprayed twice, some three times, to wipe out weeds.

“You want to make sure you have crops in your fields and not weeds because weeds don’t end up in the combine bin. Weeds don’t pay the bills,” Dorn said.

Any major changes from the EPA would affect how Dorn earns his livelihood. In the end, the real risk from any chemical is tied to the dose and that’s up to the EPA

Dorn is comfortable following EPA guidelines, and right now that means he’ll keep using chemicals like glyphosate and 2,4-D as long as they keep killing weeds.

“It’s effective and you know what you’re going to get,” Dorn said. “Right or wrong it works.”

Those tools will stay in his toolbox, at least until the EPA releases its review of glyphosate. That’s expected to come out this summer.

But this is not likely to be the last farmers hear about IARC. In October, the agency will gather scientists to evaluate the cancer causing potential of red meat.