The emerald ash borer resides in 25 states, including Iowa. Could Nebraska soon make the list? If it does, the state could face millions of dollars in damage.

I’ve just arrived at Forestry Hall on the University of Nebraska- Lincoln’s East Campus, and I’m talking with Eric Berg. He’s the Urban and Community Forestry Program leader at the Nebraska Forest Service. He’s helping me understand what the emerald ash borer is, and what it does:

"The adult insect is a fairly small little beetle; it’s shiny metallic green," Berg said. "It’s kind of a pretty bug. That doesn’t cause much of a problem. It feeds on the leaves of the tree and then lays its egg in the bark of the ash tree. Those eggs hatch and then the larvae bore under the bark." 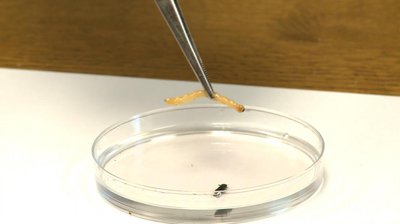 Emerald ash borer larvae bore under the bark of ash trees and soon deprive the tree of the nutrients and water it needs to survive. (Photo by Ian Edgington, NET) 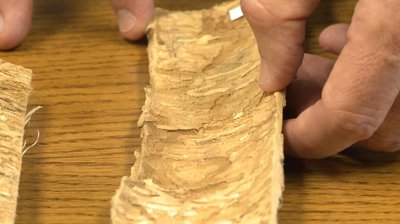 Borer larvae will bore in an "S" shaped, serpentine formation. Large populations of borers in a tree will inhibit its ability to take up water. (Photo by Ian Edgington, NET) 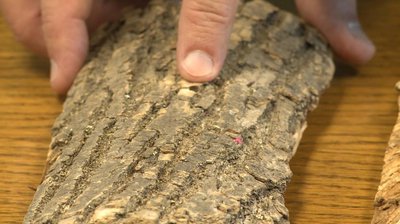 Multiply the number of larvae and they soon deprive the ash tree of the nutrients and water it needs to survive.

By now, you’ve probably heard similar descriptions. The emerald ash borer (or EAB) is an invasive insect native to China. It is thought to have first arrived in Detroit, Michigan sometime between the late 90’s and early 2000’s.

"It took a while for it to get identified because people didn’t know what was killing the trees and it’s a hard insect to find. Then when they did find it, it took a while to figure out what exactly it was and what it was doing," Berg said.

Since 2002, this insect has killed more than 30 million ash trees in the southeastern parts of Michigan.

"Speed the clock forward a little - now it’s in 25 states, confirmed, and it has killed millions of trees and cost probably billions of dollars in impact. We expect to find it in Nebraska soon," Berg said.

And there’s good reason for that. It is thought EAB came over on solid wood-packing material. In the United States, it’s most commonly transported state-to-state in firewood. And with camping season now upon us, and residents of infested states visiting Nebraska’s state parks and campgrounds, it could be prime time for EAB’s arrival. If it’s not here already.

The past year has been busy for Berg and his colleagues as they have worked to raise awareness among Nebraska residents and policymakers, including Lincoln senator Patty Pansing Brooks.

“They gave me a rapid education on the emerald ash borer and I started to realize what damage this will cause to the canopies of our communities statewide,” Pansing Brooks recalled. 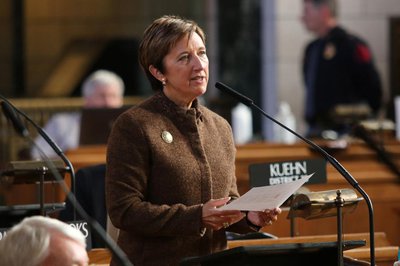 In the 2015 legislative session, Lincoln Sen. Pansing Brooks introduced LB 461, a bill that would work, in part, to subsidize damages caused by the arrival of EAB. It would funnel $3 million annually into ash tree removal, disposal and replacement costs in Nebraska. (Courtesy photo)

At the beginning of this year’s legislative session, Pansing Brooks introduced LB 461, a bill that would work, in part, to subsidize damages caused by the arrival of EAB. It would funnel $3 million annually into ash tree removal, disposal and replacement costs across the state.

“Colorado has their mountains, Minnesota has their lakes, and we have some beautiful trees," Pansing Brooks said. "We can’t just let a great number of them disappear in a short amount of time.”

But without a confirmed sighting of EAB, questions have been raised about how much of a priority it should be. The bill is stuck in the Legislature’s Appropriations Committee. And with other important issues like medical marijuana and the death penalty repeal, it is unlikely LB 461 will be resolved by this session’s close on June 5.

“I think the issue is more of timing than anything else," said Omaha senator Heath Mello, chair of the Appropriations Committee. "It was a new issue that we hadn’t heard about. It was more of an educational bill that brought the issue and put it on our radar screen for next year and future years,” Mello says.

In the meantime, several Nebraska communities are attempting to take a proactive approach by removing any public ash trees deemed unhealthy or dead. Over the past several months, Lincoln Parks and Recreation has been sending tree crews out to areas like Allendale Drive. Nicole Fleck-Tooze is special projects administrator for Lincoln Parks and Recs. She says their goal is to try and diversify the types of trees planted across the city to avoid a similar situation down the road.

“For example, we have over 100 different species of straight trees that we use," Pansing Brooks explained. "We’re trying to make sure that for future generations, we chose trees at a diversity that are well adapted to this climate that do well and are long-lived.”

It is a lesson arborists learned years ago with Dutch elm disease, and one they are being reminded of by EAB. Fleck-Tooze says the city estimates its total costs to be around $23 million.

Estimates for the entire state of Nebraska - including costs to the state, businesses and residents - are now around $960 million.