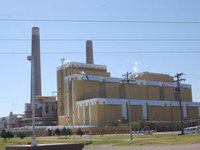 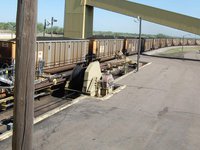 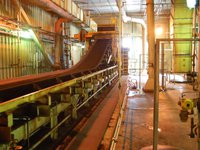 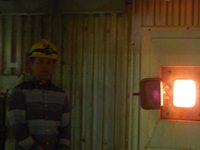 Nebraska gets lots of its electricity from generating stations that burn coal. But to address climate change, the Environmental Protection Agency says the state needs to cut carbon emissions by more than a fourth. That puts the future of those coal-fired plants, and the cheap electricity they produce, in question.

Gerald Gentleman Station is a huge, coal-fired power plant about five miles south of Interstate 80 near Sutherland in central Nebraska. On a recent morning, a long line of railroad cars containing coal creaked and groaned as the cars inched ahead.

Those creaks and groans weren’t too surprising: each car carries more than a hundred tons of coal. About 200 cars are unloaded here, day in and day out, to feed Gerald Gentleman’s appetite.

Inside the plant, coal rumbles along a conveyor belt toward a machine that pulverizes the pieces from an inch or two in diameter down to the consistency of flour. That powder’s then shot into a giant boiler where it feeds a glowing orange fireball, the size of a small apartment building, to heat steam and generate electricity.

All that generates something else as well – carbon dioxide. The Environmental Protection Agency says more than 9 million tons of that greenhouse gas come out of Gerald Gentleman every year.

EPA wants Nebraska to cut its rate of carbon emissions by more than a quarter over the next decade and a half. That’s raising questions about the future of plants like Gerald Gentleman. The plant is owned by the Nebraska Public Power District. Last week at NPPD’s board meeting, Petersburg banker Ross Knott quizzed power district president and CEO Pat Pope about the plant’s future.

“There’s a lot of rumors being spread about the impact of the EPA on Gerald Gentleman and what it means,” Knott said. “I’m not real big on rumors so I thought I’d come and ask the man that knows – Mr. Pope.”

Pope’s response was disarming but noncommittal. “Frankly, Ross, where we’re at right now is what I call, using one of my technical terms, the ‘figuring it out’ stage,” he said. “The short answer is, anybody that’s spreading a rumor out there as to how much this might cost really doesn’t know.”

EPA has suggested several things states could do to reach the targeted reductions. They could improve the plant’s efficiency – but Pope says Gerald Gentleman’s already operating efficiently. They could switch coal plants to natural gas – but NPPD says there aren’t enough pipelines in central Nebraska right now to do that. Or they could use more non-fossil sources, including renewables, like wind. But there are tradeoffs to that, as well.

Back in the control room at Gerald Gentleman, NPPD spokesman Mark Becker says wind is less reliable than coal. Becker points to a computer showing that one of the district’s wind farms is generating about half of its maximum capacity, compared to 95 to 100 percent for the coal plant.

But developments like the EPA’s proposed carbon reductions could make burning coal more expensive. Ross Knott, the banker who raised questions at the NPPD board meeting, says it might make sense for the utility to hedge its bets, combining the technical reliability of coal with the price stability of wind.

One other strategy suggested by the EPA would be for consumers to use less energy. Nebraska’s Department of Environmental Quality, working with the utilities and other state agencies, is supposed to come up with a plan which could also include other strategies, subject to EPA approval.

But as NPPD’s environmental manager Joe Citta told Pope, his boss, the process is just getting started.

“We’re starting into a big coordination and unification process to see how we can make this work in Nebraska,” Citta said.

“It’s going to be a marathon, not a sprint,” Pope replied.

The EPA’s proposed rule is supposed to be finalized next June, with the state’s plan for how to comply due one year after that. The plans are supposed to start being implemented in 2020, with the final goal achieved 10 years after that.